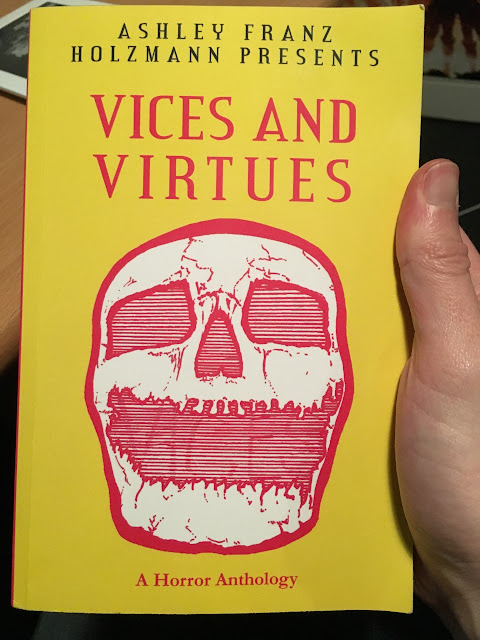 Much like with films there isn't much better than a horror anthology when it is done right. The great thing about collections of short stories is that even if there are some which don't resonate with you there is always going to be something that does. Vices and Virtues is a 400 page anthology put together by Ashley Franz Holzmann (The Laws of Nature) and which contains sixteen different tales of horror written by thirteen different authors. I love anthologies that have a theme and this book has a great one, as the title suggests the theme here is vices and virtues with each story ending with a single word that states what the chosen thought was. This ranges from curiosity, trust, love and pride all the way down to chauvinism, manliness and remembrance.

I think perhaps the best thing about this book is how completely different some of the stories are from the usual horror yarn, there are some that hop outside of the traditional short you would expect into a different genre entirely. With The Lonely Man ( by Kristopher J. Patten) you get a John Wyndham style sci-fi story that takes place on Mars with an isolated astronaut discovering someone who should most certainly be dead. With Sesshoseki (again by Patten) you have an action packed Japanese based spy story with horror thrown in thanks to a visit to the notorious suicide forest of Aokigahara. Elsewhere with Heart Full of Love (by L.Chan) you get a futuristic take on Edgar Allan Poe's classic story The Tell-Tale Heart that takes place in a world where synthetic organs are the norm.

With a few of these influences can be seen, but usually there is a unique twist that makes the stories their own beast. Given Form (by S.M Piper), Chaucer's Horses (by Christina Ferrari) and Biserka (Patten's third story in this anthology) all seemed to owe a debt to the master of legitimate terror H.P Lovecraft which is never a bad thing. Then you have My Time Is Very Valuable (by J.D Patrick) that has the idea of a Faustian pact meet up with the film Limitless to great effect. These combinations of horror types and genre types all impressed me a lot with the variety on offer, there is even a spin on zombies with first story The Girl Who Died (by C.K Walker) that just comfortably sits along more realistic stories such as the effective The Compliant (by J.L Spencer) that is about a fake kidnapping gone wrong, and Dammit Janet by Holzmann himself that is a cold observation of a woman who is always wanting better for herself and which leads to her downfall.

Though I did really enjoy this book none of these stories actually made me feel scared, though all were engaging and kept my interest. That is often the case for me when it comes to literature, mentioning him again but it has only really ever been H.P Lovecraft who has affected me enough to haunt my dreams. The closest we get here to pure horror is with The Sand Quarry (by Manen Lyset) that is about a trio of children discovering the secret of an abandoned quarry when they decide to stay there once the sun has set. This anthology has its fair share of disgusting stories which never sit well with me, these include I Loved You So Much (by Christopher Bloodworth), Birthmarked (Spencer's second short here), Constance (by Adam Grey) and Marina (by Rafael Marmol). Of those last two while I didn't enjoy the subject matter Constance was actually really well written, it was a solid horror story on both an actual and a social level, impressed me. I don't know why but it always seems the longest short in any anthology is always my least favourite, that is the case with Marina that clocks in at around 50 pages (1/8 of the book) and repelled me both in the grim subject matter and the sort of characters found here.

Holzmann has done it again really with another anthology that is well written and addictive to read. I loved the theme, those final words for each story added a moment of chill to each one and displayed how inventive some of those words were used within the context of the story read. I feel I said this for The Laws of Nature also but special mention has to go to the great book design that really stands out with its bright pink and yellow cover complete with cartoony smiling skull. Vices and Virtues is now available to buy in both paperback and in digital form, I fail to see how any fan of horror wouldn't find something to enjoy here.