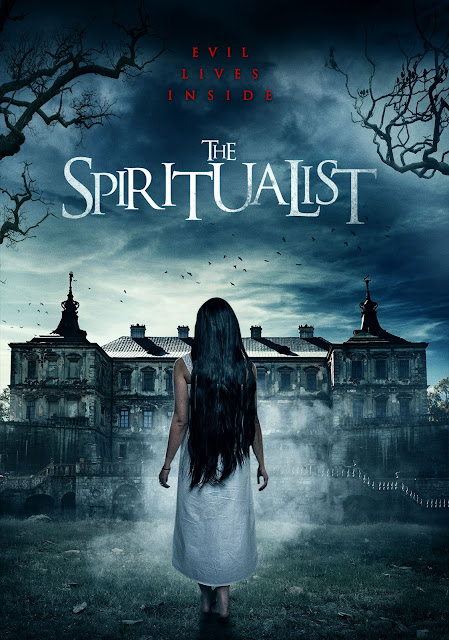 Carl Medland's The Spiritualist is a slow, brooding English paranormal horror that falls very deeply on the side of drama. There is so much drama in fact that at times the horror is very far away, it reminded me quite a lot of 2015's The Invitation which also fell heavily on the dramatic side of things. This movie is pretty much the definition of a flawed gem, there are moments of near perfection here, several scenes are just amazing to watch. Unfortunately there is nearly as much here that repels due to a series of frustrating story beats and movie making decisions.

Laura (Jasmyn Banks from Eastenders) suffers severe night terrors and begins to suffer hallucinations at the family mansion she lives at with her boyfriend Jake (Judson Vaughan from short horror Burn). Having recently lost her mother (Julie T. Wallace) who before her death had descended into insanity Laura starts to believe it may be her mother's spirit haunting her, the only alternative being that she is going crazy just like her mother before her. Her friend Petra (Petra Bryant) contacts a spiritualist she knows (Caroline Burns Cooke) and so one night this medium along with friends of Laura and Jake come to the mansion in order to perform a seance and banish any evil spirits that may lurk there... 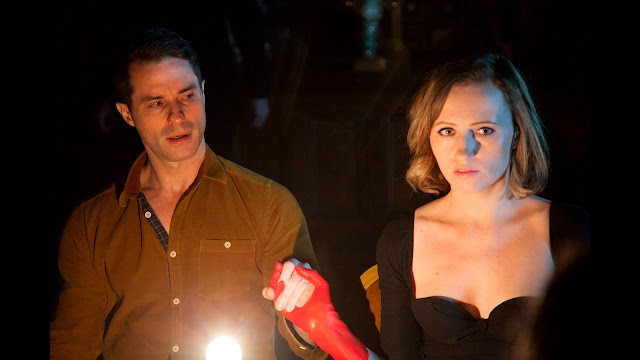 This is a film of three very different halves, over an hour and forty minutes this feels like several films spliced together in sometimes confusing ways. The first half hour was by far the worst of this, as a measure of honesty I was attempting to watch this initially at my work which has about as good a signal as the concrete prison from Xtro 3: Watch the Skies. As such I was getting constant buffering on my phone which did contribute to my lack of enjoyment. I found this first part pretty confusing due to the way flashback sequences are shown here. There is no fade away or even scene cut when past segments are shown, instead they flow seamlessly from present to past. So we get Laura waving off her boyfriend before heading outside for a walk (in the present) where she bumps into her Dad (in the past) and they have a talk about her mother's deteriorating condition. Another example is her and her boyfriend talking outside the mansion (in the present) in the exact same shot the camera pans across to some grass where her Mum and Dad (in the past) are messing around. It was a novel way of showing how much history has affected Laura's whiny outlook on life (and boy is she whiny) but it led to a lot of confusion for me until I worked out by what was being said what was actually going on.

The middle part is the best though and starts with the introduction of the titular spiritualist. Burns Cooke is simply stunning here, she brings so much soul to what up to this point had been a bit overly dramatic. I loved the frank and natural way her character talks, her actions bring a different way of portraying a blind woman, looking off into empty spaces all the while she gives the impression of seeing things the other cast don't. It is a shame she only has a small part here, but it is a very important one. The whole seance scene is the standout part here and sadly the absolute highlight, there are some great performances, most notably aside from Burns Cooke is Vaughan who also delighted in this particular scene. The only downside of this is Jody (Ross William Wild) whose character is that of a generic soap opera bad guy, he projects aggression and needless hostility at every turn and gave a bit of a pantomime feel with his one sided portrayal. 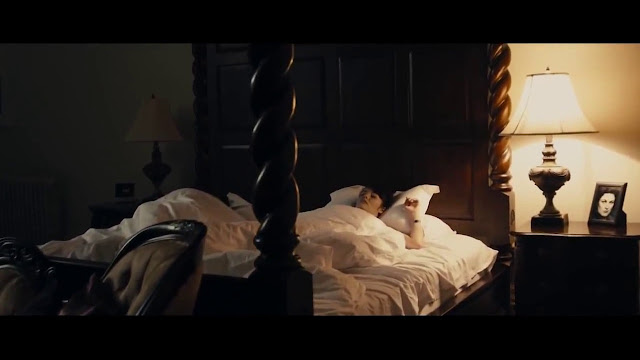 Onwards to the final part where The Spiritualist changes genre slightly and becomes more of a slasher film with the varied cast meeting their fates in a variety of random ways. There were some weird filming decisions here, such as centring the camera on a character's head as he explores the dark mansion rather than showing anything around him. The camera irritates at times, especially when it is trying to create false fear such as slowly creeping up on Laura as she is searching the basement. On two different occasions an attempt at a jump scare is done when the music (that is mostly atmospheric and fitting) suddenly builds to a piercing crescendo timed with a character bursting into shot. To finish up my particular gripe of the film's pacing there are a series of actual flashbacks to show key events in the movie shown from different perspectives towards the finish, but there are a heck of a lot of these flashbacks that they end up taking up slightly too much time even if they were admittedly pretty cool and clever.

While I found the character of Laura to be pretty annoying and self centred I do like that there isn't really anything shown whenever she thinks she has seen something spooky going on. It gives the impression that just maybe she is crazy after all, though on the flip side makes it hard to care about her as she constantly seems to be jumping at shadows. While Wallace is perfectly cast as Mother (managing to be very crazy without resorting to over acting) I found it weird how physical her character was, I got confused at times if she was actually a ghost, or if she was alive and living in the freakin' walls due to how much interaction she has with both people and objects. 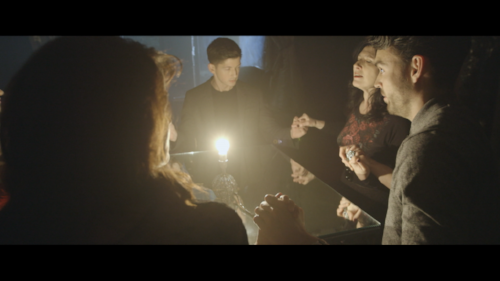 On paper The Spiritualist looks like a great idea, and I did enjoy the general plot despite some unresolved sub plots, however on screen a lot of the decisions with regards to how to show the story seemed a bit flawed and confusing. There are some great parts of this movie, mainly in the double whammy of both Julie T. Wallace and Caroline Burns Cook who both give authentic performances. However a surplus of irritating to forgettable characters hinder any attempt at making the intense drama stick in the mind for too long. So come for the seance scene in the eye of the storm that is the rest of the film. The Spirtualist becomes available on all major VOD formats on December 5th 2017 thanks to the great people at Midnight Releasing.