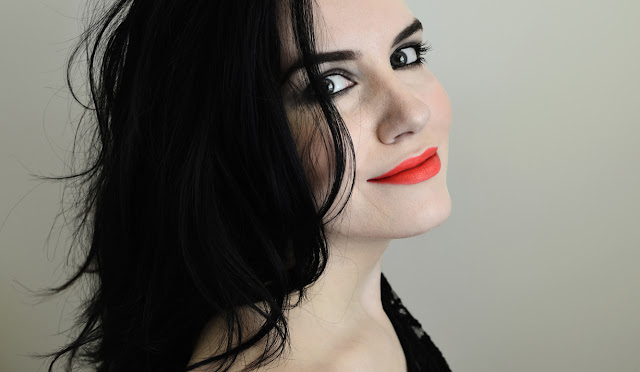 I recently got the opportunity to interview Canadian indie horror actor Maura Stephens. In the nine years my blog has been going I have only previously done one interview, it was a long time ago and pretty awful and so I felt the need to get out my comfort zone and try another one! I first saw Maura in Andrew J.D Robinson's short horror Placebo, then in a larger role as the main lead in another of his shorts; A Walk Home Alone. She has also done work with CryptTV and 15 Second Horror Film Challenge among other things. Included after the interview are a few of the short films she has appeared in for your viewing pleasure.

Could you give some background about yourself, and what got you into doing horror?

Playing characters and storytelling in various forms has been my jam since I was a wee feral beast. Growing up homeschooled definitely helped facilitate that because there was so much time to be a creative little weirdo with my four sisters. We really embraced creating our own worlds. Two of my sisters, Sarah and Celia, and I ended up making our own films with a webcam in 1998/1999, they were black and white and laggy and all silent films because webcams back then were pretty dodgy, but then we got a camcorder so we had colour and sound and went crazy with it. My love for playing pretend never faded, so here I am.

It's funny, even when Sarah and Celia and I would make our improvised camcorder films we would lean towards horror with offbeat comedy elements thrown in. So it's always been a genre I naturally gravitated towards. I remember being really little and filling a notebook with creepy childish doodles of Edward Scissorhands and wanting to dress as him for Halloween. I always connected more to the stranger worlds and characters. Edward, Lydia Deetz, Nosferatu...

You have done a lot of fun shorts, some even coming in at the 15 second mark, how long do these typically take to film and is it hard being able to get into your characters having such limited screen time for them?

I've done a lot of shorts that have only taken a few hours at most, sometimes maybe only an hour. Depends on locations and if it's particularly bloody shoot. But even A Walk Home Alone took very little time because everyone came so prepared and it all took place in one building. In terms of getting into character within such a short timeframe, I find my solo prep before the shoot day is vital depending on the content, like if it's a more wordy piece like A Walk Home Alone. But if it's more something where I have to be scared and a bit emotional, but have little to no lines, then I tend to dive in armed with my instinct and imagination, sometimes plonking certain images or ideas into my noggin while shooting.

What is your favourite film you have done, and why? Going off that what has been the toughest film to do?

They all have a special place in my heart, which is hideously fromage-y but true. If I had to pick, picturing you holding a super soaker to my head, I would have to say Beauty Sleep. Perhaps in part because it is the longest film I've done so I was able to spend more time with the character and felt a particular connection to her. It was a ride because I got to act backwards and try to express this character's unravelling without any dialogue. I'm also a total sucker for surreal films, so I was already won over after reading the first page of the script. As for the toughest, I did a short film in a warehouse in winter with very limited heating. Freezing temperatures. Tank top. Ooooof! Enough said.

I often find if I watch any behind the scenes footage for films I like it ruins the effectiveness due to knowing how it was all put together. Do you find you can't be scared by your own films?

That's a great question. A Walk Home Alone actually got under my skin, which I wasn't expecting because it can be hard to be scared by your own work despite how effective and cleverly it has been written and produced because you have all the behind the scenes stories in your head as you watch it and you remember how much laughing and joy actually took place. I remember my first time watching it though, and getting to that last moment where you hear the newscaster's voiceover; the weight of the situation really sunk in and left me feeling genuinely disturbed. I'd love to say more but it would spoil the "fun" for those who haven't seen it yet.

Do you watch much horror at all? What's your favourite scary movie?

Now I'm imagining you wearing the Ghostface mask. It's a tricky question. Horror has so many awesome sub-genres too, so it's hard to pick just one film out of everything that is out there. The film has been with me since I was a child though is Robert Wise's The Haunting. I've always had a real soft spot for a good paranormal story. Kind of obsessed with ghosts as a child...and adult. Solid writing, gorgeous black and white cinematography, brilliant performances, and the spooks still get under my skin after all these years. "Whose hand was I holding?" Vomit. Urgh. So good.

Finally, do you have any upcoming horrors in the pipeline?

I have another short with Andrew (J.D Robinson) on the horizon called Dispatch. I can't give too much away, but the script is one of my favourites of his, really juicy and unsettling. I play a 911 dispatcher with the lovely Erin Kiniry (from Mitchell Slan's award winning short Balloon) as the panicked caller. I think people are going to really dig it.