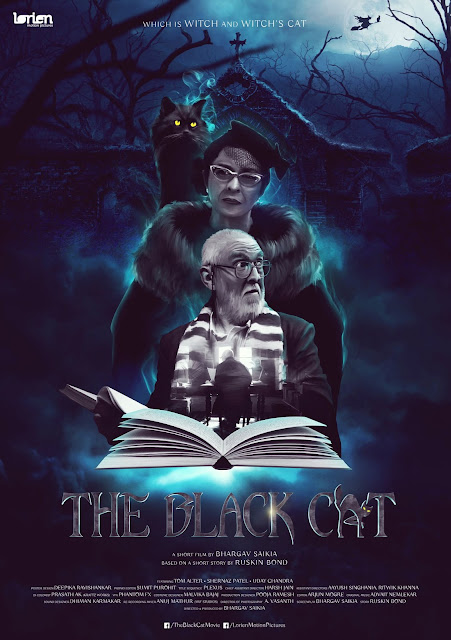 The Black Cat is not another adaptation of Edgar Allan Poe's cautionary tale as I first assumed, instead it is a charming adaptation of the short story of the same name by celebrated Indian writer Ruskin Bond that deals with the subject of witches. It features legendary Indian actor Tom Alter in one of his final lead roles before his sad death due to skin cancer.

Alter stars as Ruskin Bond; a writer who has recently brought a broomstick in order to clean his messy house up. However not long after taking his tool home he is visited by a mischievous black cat who causes the man no end of trouble. Hot on the heels of this unwelcome invader comes Miss Bellow (Shernaz Patel) who claims to be the owner of the cat and wants it back, but does she have ulterior motives? 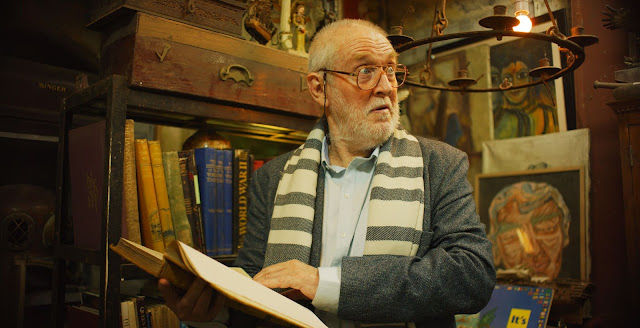 This 20 minute short (directed by Bhargav Saikia in his second short film) is a whimsical and magical offering that stays on the side of fantasy for the majority but does have a few scenes that are more frightening. The majority of this has Bond home alone dealing with the troublesome cat, and then his bizarre meeting with Miss Bellows. I loved Alter's performance here, he came across as a likable character whose gruffness never seems much more than an act. Patel also gives a good performance as the mysterious woman that visits. I thought the set decoration for the home was pretty good, though in terms of props the broomstick did seem to be pretty useless as it seemed to cause more mess than it cleared up! The music throughout fits this short perfectly, it all adds to the fantastical nature of this.

There is some horror mixed in here, notably The Black Cat starts on an edited sequence of close ups of the titular cat and ominous music that created a false sense of expectation. Later there are some freaky make up effects used for the witch character who is the typical depiction of a witch (black robes, pointed black hat, long nails and rotted teeth). There were some great shots of her just staring at the camera cackling. In terms of the plot it was pretty simple, but then it was based on a short children's story after all, though felt it ended with no real resolution to anything.

I liked The Black Cat, it has performances perfectly suited to the material, and is filmed in a unified fairy tale type way that cant help but delight. Also special note goes to the great looking hand drawn end credits that was a fun way to end. The Black Cat is currently free to watch on Lorien Motion Pictures official YouTube channel.

Posted by Daniel Simmonds at 15:45