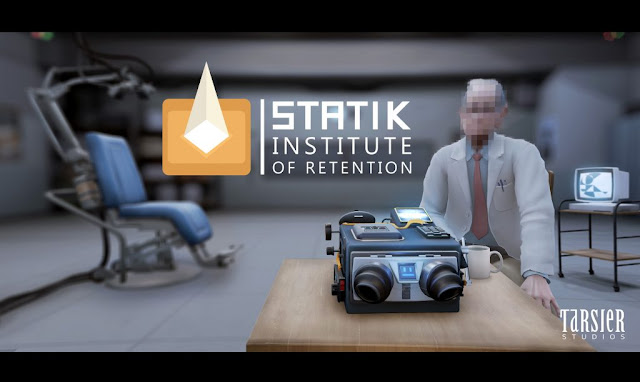 So technically Statik isn't horror despite what I may have said in the reviews title, it does have an air of bizarre mystery about it, while sometimes it hints at awful things. This is an exclusive PSVR puzzle game that makes ingenious use of the PS4 controller to create atmosphere.

The plot is pretty obtuse but what is clear is that you are a test subject for Dr Ingen at an undisclosed laboratory. You are given a series of puzzles to solve, in each test you awake strapped to a chair with a strange device locked over your hands. By interacting with this device from the inside you complete a series of tests on it, once successful you are knocked out, awaking in either a room to be surveyed with weird questions, or inside a tank where you are given puzzle parts to make up some sort of cube. 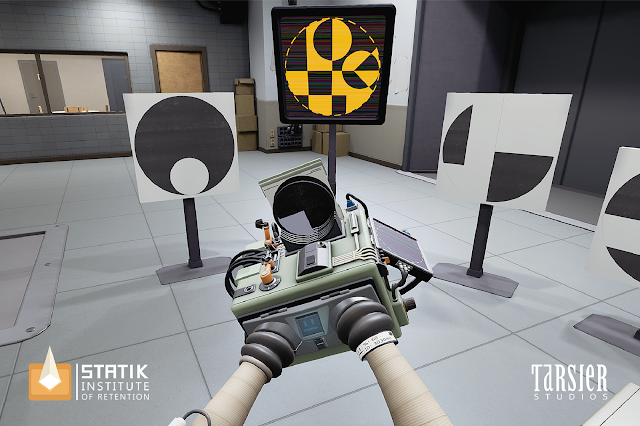 It is going to be hard to explain just how clever and unique Statik feels. Each of the 10 or so levels gives you a different device to solve, this is done by using pretty much all the buttons on the PS4 controller. Each button or stick corresponds to a part of the device on screen, each device has three different sides that all have different functions upon it. So one time for example the buttons can set dials, other times rewind and fast forward cassette tapes. In each level you are expected to work out the answers for yourself, there is no hint system and all the answers are already subtly around you. Sometimes solutions to puzzles are contained within the set dressing of the room you are in, such as a poster on a wall (for a shape based puzzle), or as colour coded objects (for when you have to put in a colour combination lock). Other times it is the device itself that gives you the hints such as one that had a screen of static on it that would clear when pointed in the right direction. There are all sorts of ways you are forced to use your brain with memory puzzles, shapes and sound ones among others. Sometimes I would nearly be pulling my hair out in bafflement only to then have a Eureka! moment and feel like the cleverest person in all the land. The fact that you are always left to your own devices rather than spoon fed answers I always thought was fantastic.

With so many different buttons doing so many things per level it did get quite confusing with what did what. On quite a few occasions I went through a bad stage of constantly mixing up the controls and pressing and resetting things I didn't mean to do. The box is always a lot of fun to solve though and was cool how you have to (literally) think outside the box. One stage for instance has you using a map on the wall to work out how to turn off the lights in various rooms in the institute, another one had my very favourite Statik moment in which you use the device as a remote control for a remote control car. Using a little TV screen to control a car within the confines of a VR game felt so immersive, I felt like I was Inception style pulled into the game one deeper layer. 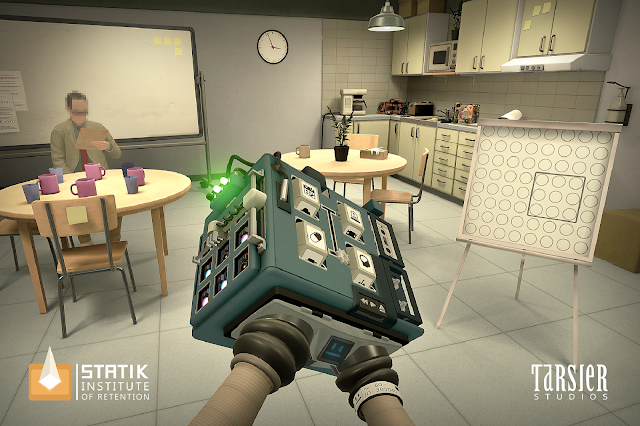 This is all held together by a story that was very mysterious. Dr Ingen is the only person you see here, and his face is pixelated out. He starts each experiment with surreal musings, going on and on about random vaguely sinister little monologues that reminded me of something from Jam. One such example is when he talks about being locked up in an Aunt's attic one summer, then confessing he doesn't actually have an Aunt so has no idea just whose attic he had been locked in. There are vague notions of this being an experiment your character volunteered for, but no reveal of just what is really going on, and hints as to the fates of previous volunteers. It leads up to a very slight Portal style moment that wasn't too unsatisfactory if only because the rest of the game had a vibe that wasn't the most exciting (did contain the single jump scare of the whole thing though!). Taking place in the sterile confines of a lab works well for VR as there isn't much detail needed anywhere, it may seem a bit bland but it focuses your attention on solving the puzzles rather than gazing around.

I enjoyed playing Statik and it has re-play value in the form of an alternate ending, but I felt once I had completed it there wasn't much need to return. The puzzles were satisfying to solve but the rewards for doing so didn't give as much of a return. Still if you own PSVR this is well worth a play, it has a demo on the Playstation store so give that a whirl to get a decent idea of just how this works.

Posted by Daniel Simmonds at 06:20