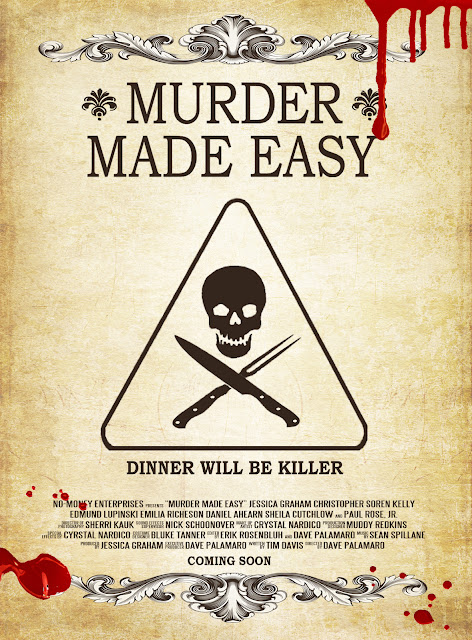 After a week or so of just putting up posts about my own stuff it was about time I returned to items that had been sent for my perusal. So today I watched David Palamaro's indie thriller Murder Made Easy. I should admit that my expectations were pretty neutral for this one, I knew the general gist of the film so assumed it would be pretty bland. However this award winning horror (won the Indie Spirit Award at the 2017 Women in Horror Film Festival) does something really quite clever and unique.

It is a year since Joan's husband Neil died of a heart attack (Joan played by Jessica Graham) and she and her friend Michael (Christopher Soren Kelly) have arranged a night to remember with several close friends. The two are soon revealed to be sociopaths and have planned to kill their guests in retaliation for crimes they had committed against Neil. They have arranged a series of staggered dinner dates to take place over one night, each guest is first confronted over their past transgressions and then murdered and hidden away in time for the arrival of the next one. However with the two finding themselves so adept at killing can they really trust each other once their fool proof idea has come to pass?

Murder Made Easy is a very simple idea, I don't mean that it is lazy, obvious or too bare bones, instead the fact this is an indie project is brought to the forefront. I kept thinking during my time with this that this would be excellent as a stage play. The majority of this revolves around the interactions Joan and Michael have with their guests and the eccentricities that each of the new people bring to the screen. Both Graham and Soren Kelly play straight people, cold and calculated who are quite subdued for the most part. Each of the people who turn up are the opposite, larger than life people such as Angela (Sheila Cutchlow) who is obsessed with the books she has written, idiotic indie film maker Damien (Daniel Ahearn), ultra strict vegan Cricket (Emilia Richeson), and the theatrical Marcus (Edmund Lupnski). At first when Marcus appeared I didn't like the acting Lupnski brought to the role, it seemed too over the top and silly, but then I realised this is actually perfect, he and the others put so much into their characters, make them seem so outlandish and crazy that it goes together fantastically. You get the sense that these people are lesser prey to the killers, something that goes with the controversial thesis Michael had written about the strong deserving to rule the weak however they seem fit. There were elements of Crime and Punishment in this thinking, a vibe that only gets stronger later on.

Murder Made Easy is split into chapters, each headed with a title card displaying what is next on the menu. So rather than get introductions to the next stages instead it is the food to be eaten. There is even a nice little black and white intermission halfway through that not only hints at what is to come, but feeds into an ending that could be interpreted  as ambiguous due to the similarities shown at both points. The tone of this movie is quite farcical at times, this is no dark and gritty thriller instead there is a good dose of humour that comes both from the clever word play (such as Joan and Michael giving veiled hints at what has happened to people they have killed to the new guests). The humour also comes from the audacity of the plan, staggering the killings means the house is soon filling up with corpses and leads to great moments of mistrust and misdirection. 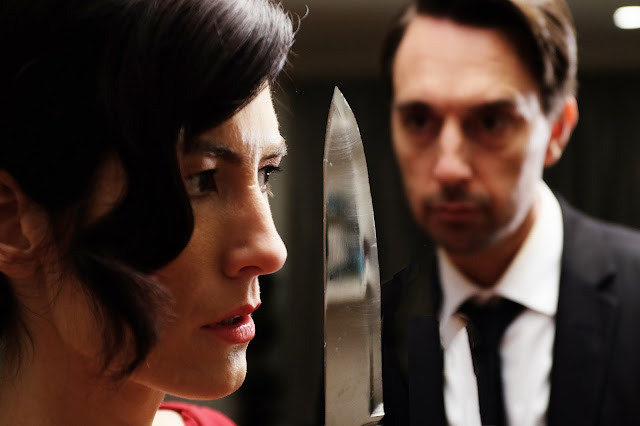 For me the plot on the surface seemed flawed, I couldn't see the worth of murdering a group of people over one night, especially when previous victims keep nearly being discovered. I couldn't see the reason why they had to die either, each of the guests caused Neil some problems in the past, whether it be refusing to pay back a loan, or plagiarising his work, but for the two sociopaths I didn't see why this would drive them to kill as it isn't like they seemed to have ever cared about Neil, or have anything to gain by killing. To keep things fresh each murder takes place in a different way, such as gunshot, poison and suffocation, I appreciated the variety but why the same method wasn't used each time I don't know, would have made things simpler. It gets to a point where the tension really ratchets up, the sudden arrival of a cop elevates the finale when I had honestly expected a more slow and singular finish. This breaths a last breath of fresh air into the story with some inspired moments such as when the cop stumbles across a handwritten note on how to dispose of dead bodies.

What I liked most about Murder Made Easy is how such a simple concept worked so well, having the entire film take place in the one house, with a small cast of varied people just plain worked. This is helped by the very fitting soundtrack that compliments the farcical nature with a series of tunes that range from the somewhat too obvious thrilling sound to what appeared to be slow jazz as you would find at a beach side club. The acting is exactly as it needs to be, in particular Graham stood out with her ice cold persona, while the absurdities of the visitors meant each in turn left a lasting impression. Elsewhere the directing and editing both both delight, a prolonged scene of jump cuts of Joan trying to haul away a body was very entertaining, and the slow single take pan of a series of photos that comprised the start credits for instance. It all comes together and makes a simple story work, and go to places I certainly couldn't have predicted. I came to this with expectations of a dull murder mystery and left having really enjoyed what I had witnessed.