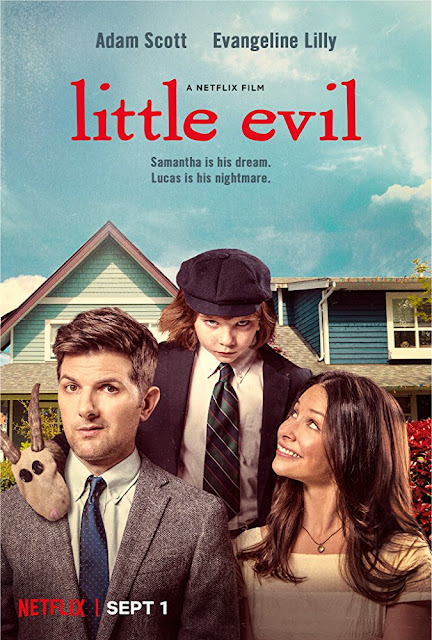 Little Evil is a comedy horror that was written and directed by Eli Craig (Tucker & Dale vs. Evil, the failed pilot for the Zombieland TV series). The movie is a parody of The Omen and so a knowledge of that film is needed to really get all the jokes. Even if you have seen that though this doesn't really do too much to stay in the mind, but one thing I will say is this certainly gets better as it goes along.

Adam Scott (Krampus) stars as Gary; a newly married man whose wife Samantha (Evangeline Lily) has a strange silent child called Lucas (Owen Atlas) that he becomes the stepfather of. After a series of incidents Gary comes to realise that Lucas might actually be the Antichrist and initially sets out on a plan to defeat him, but maybe all the boy needs is love... 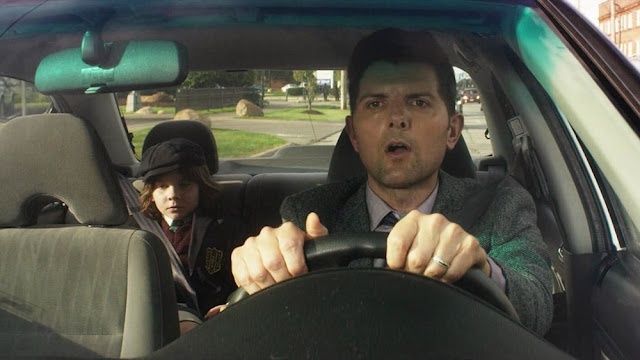 I realised watching this that I actually like Scott as an actor, here he plays a hapless good guy who tries his hardest to do right by his new wife. He makes all the effort with Lucas and this creates a lot of the humour as this blatantly evil child is able to act with impunity by his devoted mother. It starts well with Samantha finding Gary buried alive in the back garden with a 'one week earlier' plot device used to show what led up to this moment. This first half of the movie wasn't great though, I didn't find a lot of the characters interesting or likable, more they just come across as weird with off putting conversations. By trying too hard to be a parody of The Omen this attained a kind of dull feeling with events just done in a more comedic fashion, such as a teacher at Lucas's school getting impaled on metal fencing, and of meeting a small devil hunter.

The second half thankfully actually improved enough for me to stick on an extra zombie head to my rating. With Gary and Lucas teaming up in a way there was enough deviation that I became more involved in the basic story of everyone having free will to make their own decisions. It led to a fun montage at a water park before the real antagonists of Little Evil appear for the exciting, if shallow finale involving a monster truck, masked cultists and a gateway to Hell. All throughout the humour just didn't resonate with me, I laughed out loud on a few occasions such as when Gary is discussing a scene in The Omen as a reason why he can't just straight up try and kill Lucas. Mostly the jokes were so bland and inoffensive that I didn't feel much of anything hearing them. 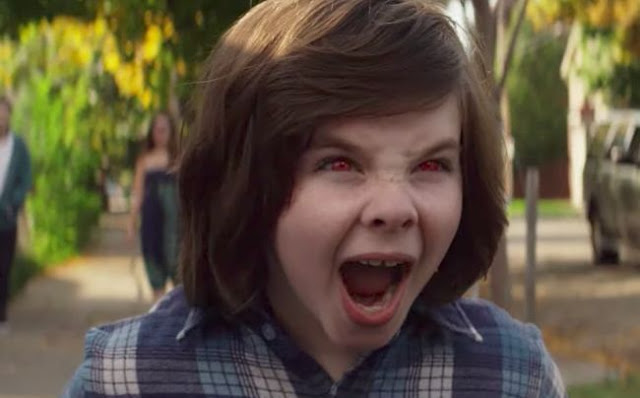 Scott was perfectly cast as Gary, while Atlas really looked the part and had the evil death stare of the Antichrist down pitch perfect. There are plenty of scenes involving the creepy kid being places he shouldn't be and then vanishing, and he wears the iconic clothing of Damien from (of course) The Omen at times. Elsewhere Gary's best friend Al (Bridgett Everett) was a great accompaniment even if she was plain weird as opposed to funny here. For the rest of the cast though none stood out, that is aside from Brad Williams who had a small part (no pun intended) but stole his scenes with his portrayal as a determined hunters that had all the best lines (such as making a Ghostbusters joke about a 'keymaster'...you had to be there).

Little Evil wasn't much more than a forgettable throwaway horror comedy. It was inoffensive enough to not be a bad watch, but it did nothing to really make itself stand out due to humour that never really felt like it hit the mark and a plot that was too generic outside of the unique parallels between the difficulties of being a step parent and finding out your step child is a child of actual evil. Little Evil is currently on Netflix.

Posted by Daniel Simmonds at 12:16