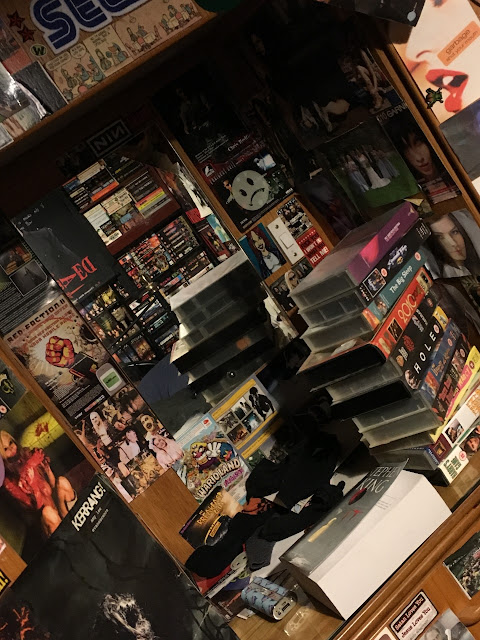 For the first time in over five years I have two weeks off of my day job, as I tend to favour just a week. Maybe it will be a bridge too far as I left my department in a battle damaged state, but regardless I intend to do a heck of a lot of stuff for my blog (as well as clean my very messy HQ). I have books to read, both digital and physical, I have video games to play, and lots of horror films to work my way through. Hoping to build up a surplus of blog posts to use for rainy days. Any way enough about me, here is another round-up of news.

The people behind the well made horror anthology series The Witching Season have announced they are planning to make a feature film. This film is going to be an adaptation of They Live Inside Us which is about a writer who spends the night in a haunted house in hope of getting inspiration for his latest work. I have actually seen that one but no idea when or how as I haven't mentioned it on this blog before. They say of this 'The feature film will be based on the same general concept as the short film, but the longer run time will allow us to expand and polish the idea into something very unique and powerful'. There is currently an Indiegogo campaign going to raise funds to fund the making of this film with a host of rewards available to backers. That page can be found here, it's worth a visit if only to check out the original short They Live Inside Us which is included there. I wish them all the luck.

Next up a fun music mash up by Electronic Production duo Steep Steps who have had the ingenious idea to mash up the Game of Thrones theme tune with the 80's synth of Stranger Things. The near two minute track is called 'Game of Thrones (in The Upside Down)' and there is a fun music video for it that has the two flitting between two worlds as they perform.

Keeping with music comes the gloriously silly '12 Songs in the Style of The Nightmare Before Christmas' by 10 Second Songs' creator Anthony Vincent. Over this four and a half minutes Anthony covers such classics as Michael Jackson's Thriller and Rob Zombie's Dragula and gives them a Danny Elfman orchestral twist. This is quite funny and had me giggling quite a lot. I was so impressed by this mash-up style that I subscribed to his YouTube channel as he covers a whole host of songs in the style of famous bands.

Shockumentary Mortal Remains is the debut feature of Cryptic Pictures and examines the cryptic life of Karl Atticus; a notorious filmmaker from the 60's and 70's whose works have seemingly been erased from history, and who himself was found dead in mysterious circumstances. This was filmed over a three year period and includes interviews with historians and horror aficionados, including Eduardo Sanchez (co-director of The Blair Witch Project). The trailer certainly makes this seem like something worth watching. Mortal Remains is now available on Amazon, GooglePlay, YouTube, iTunes and Vudu. It is due to hit Netflix next year.

A teaser trailer for upcoming horror Lilith has been released. This movie is about a couple; Heidi and Steve who are travelling cross country in a RV on a vacation where their path crosses with a young woman named Lily. This meeting brings with it all sorts of terror and mayhem. This indie film features actors that include among them Jessica Cameron (Truth or Dare) who was also the executive producer here, Carlo Mendez (Parks and Recreation), Ryan Kiser (Truth or Dare), and Ali Ferda (An Ending). It looks to be a bloody piece so may be one to keep an eye on.

Finally a trailer for gay slasher Alpha Delta Zatan is now out. This film from Together Magic Films and Reel Nightmare Films is now playing on Amazon Video US.UK and in over 100 countries on Vimeo On Demand. This is about a frat house that includes among its members a mask wearing killer, and was designed as a role reversal on the traditional female focused sorority slasher films, featuring as it does an all male cast.