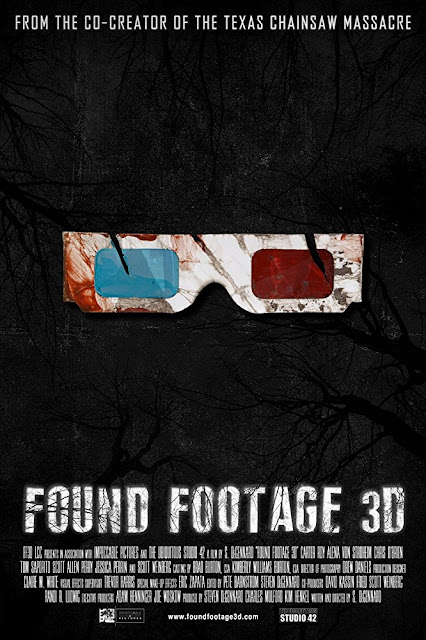 Found Footage 3D you might be surprised to discover is a horror from the found footage genre, not only that but it purports to be the first ever one made in 3D. I watched the 2D version as I don't own a 3D TV (does anyone aside from a handful of people?). The film within a film idea creates some funny moments as the tropes of the genre are brought forward in some meta ways, yet when the actual film itself falls for these same tropes you get the impression the ball got dropped somewhere along the way.

A group of filmmakers have decided to make a found footage horror film, and to make theirs stand out from the crowded genre they have decided to film it in 3D. The small crew head out to an abandoned farmhouse that just so happens to have a real world sordid history, soon they unwittingly find themselves starring in their own found footage for real... 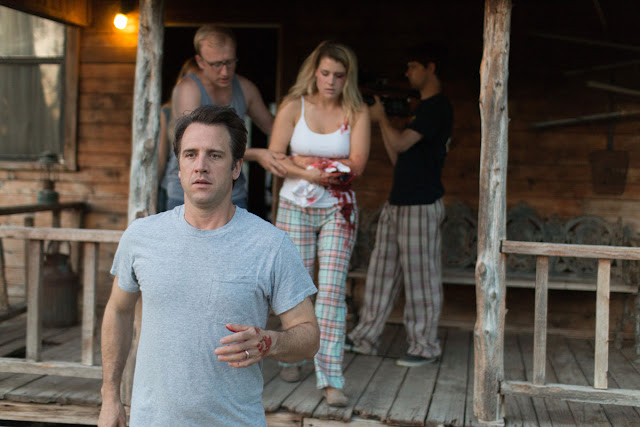 This had some good ideas going for it, I will say that much. There are some really funny moments here that take the mick out of found footage in ways that really work Derek (Carter Roy) who was the writer for the movie (within the film) as well as the main actor has total delusions of grandeur constantly comparing his visions to those of famous directors. This leads to some funny moments of him constantly wanting to change the script, even to change the ending so that his character can survive. It becomes meta with the behind the scenes footage constantly being filmed by cameraman mark (Chris O'Brien), his interviews with the crew leads to parallels between what they are making on screen and what is actually being filmed. The increasingly sidelined director Andrew (Tom Saporito) states the two most important things you have to do is explain why the footage is being filmed in the first place, and why it continues to be filmed. That is something Found Footage 3D does well in that these bases are both covered.

A lot of my enjoyment came from the friction and fallings out of the small crew which comes to a head when online film critic Scott Weinberg (played by himself) visits the set for an article. His whole role is a lot of fun as he picks apart the car crash he has found himself a spectator of. It leads up to the very best moment of the film that I can't spoil, needless to say it was very funny. The actual film within a film idea was what made watching this enjoyable enough though has been done quite a lot in itself. The problems come when the very ideas that are being made fun of then occur. At one point they discuss what the evil of the horror they are making is going to be, saying it shouldn't be CGI as they can only afford bad CGI. Then when we get to see the real evil haunting them it is indeed obvious CGI which was very hard to find frightening. They lambaste the idea of jump scares only to then do exactly what they had been rallying against at several points. They even give away the ending of Found Footage 3D long before it ends and it is just as stupid as the idea they had been discussing, especially as a cheesy one liner precedes it. 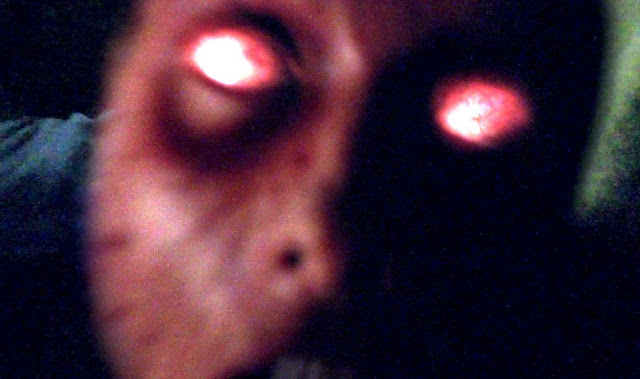 While this is amusing on a lot of occasions the general tone is one of seriousness and so I couldn't really tell if they were making mistakes on purpose or accidentally. There was a really glaring continuity error that ruined what should have been the highlight of the movie in terms of terror. That one moment when the creeping horror spirals out of control into the insanity of a high action finale in found footage would have been fantastic here except for one bandaged arm. Earlier in the film lead actress Amy (Alena von Stroheim) has her arm sliced open and so has to have it heavily bandaged, then it goes to a scene with her acting with Derek but the bandage has vanished and her arm is no longer cut up. Then it goes to the next scene and her arm is suddenly all bandaged again. This wouldn't have been an issue but it happened during the most important scene in Found Footage 3D, rather than paying attention and getting immersed I instead found myself rewinding this to see if I had misremembered. I really don't know if this error was done on purpose as a joke or if it was accidental but it ripped me out of the film incredibly badly and ruined what would have been a great transition.

This follows such a rigid formula that it was hard to get excited. The slow building up of weird but isolated events, of characters thinking others are pranking them, of people telling the cameraman to stop filming, shaky cam in the woods, and the jump scare ending are all so predictable and dull. This is made more infuriating as characters have already pointed out these tedious tropes yet the real filmmakers follow them regardless. There are some nice ideas at times, the split screen showing two different people filming was nice towards the end, the generic intro text that is then immediately ripped apart by Andrew was a great way to start things off. The humour works, there are some good performances, and there are even some moments of horror that also work (a scene involving a hammer for instance). Yet the average CGI effects, the failing to be original enough, and slow build up combine to make something that is ok, yet hardly the breakaway film it thinks itself to be. I guess if you're watching this in 3D add on another zombie head to my score.

Posted by Daniel Simmonds at 12:14