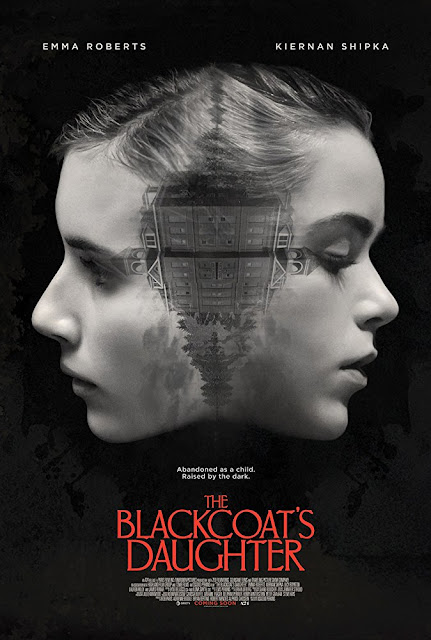 All year long I had heard people saying how good a film called The Blackcoat's Daughter was yet I could just not find this anywhere. Luckily I realised the film is actually called February everywhere outside of the U.S, not only that but it had been sat gathering dust on my Netflix list for quite some time.

February takes place out of sequence quite a lot of the time, yet despite this it isn't actually that hard a film to follow. During half term at an American Catholic boarding school two students are left behind due to their parents not turning up to collect them. Kat (Kiernan Shipka) is worried her parents died in an accident due to a nightmare she had, while Rose (Lucy Boynton from I Am the Pretty Thing That Live in the House) purposely gave hers the wrong date so that she would have time to tell her boyfriend she is pregnant. Kat's behaviour starts to become very strange with the usually meek girl acting out of character which concerns Rose. Meanwhile in a separate storyline Bill (James Remar from Dexter) offers stranger Joan (Emma Roberts from American Horror Story) a lift with him and his wife after seeing the girl waiting for a bus in the cold winter night. 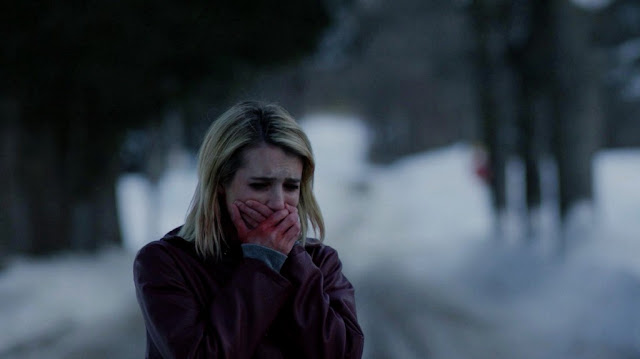 I loved the way February was set out, it creates mini cliffhangers, and has little chapters that play with time. Sometimes it shows the same timeframe but with another character's perspective, sometimes it runs stories concurrently that don't take place together. An example is a phone rings and a character goes to answer it, then future events happen and it is only later on in the film it goes back to the phone call scene and shows it in full. It does this with various characters in a variety of ways. Stripped to its bare bones this is a film about demonic possession, whether that be actual, or down to mental illness, but it skirts away from a lot of the usual tropes (with the exception of one scene) and has that angle put on the back shelf with it insinuated by how characters have started acting.

On the topic of acting there isn't a bad actor here, I thought all the performances were really good, especially with Roberts, Shipka and Boynton on the female side, and Remar's great turn as the genuine Bill. This is a bleak movie that moves along at a glacial pace yet is made all the more engaging by these wonderful believable performances. The writing and directing by Oz Perkins (I Am the Pretty Thing That Lives in the House) is on form with stiff uniform shots mingled in with slow pans. The quality of the camera work, and of the lighting was all top notch. I loved the use of darkness here, the sense of isolation; the cinematography was solid.. With Perkins other film he directed being a yawn fest it is good to see he can actually do slow burns that draw you in. 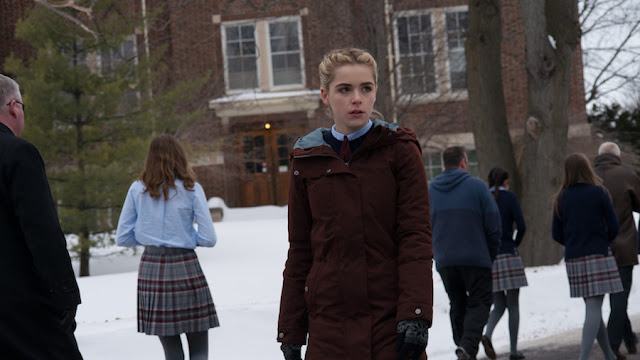 I felt that sometimes the plot wasn't as clever as it seemed to want to be, it was obvious to see for instance how the seemingly unrelated plot with the hitchhiker was actually related. To be fair it is shown very early on in a mild twist, then the later twist by that point was practically being screamed from the rooftops well in advance. I felt there was some pleasure given in drip feeding the viewer unsettling clues and then leaving you to stew about them for a while. There are some great special effects used during a stabbing scene, the noise the knife makes and the blood spilt combined together for horrific joy. There is a feeling of low level sinisterism here but never really much terror aside from a couple of short scenes (such as a glimpse of Kat through a window manically prostrating in a dark boiler room).

As always with slow burning films they are not going to be for everyones tastes, yet when they are done well such as is the case with February it makes scenes drip with atmosphere. It helps that the acting is all so good here and that a well trod story is given a slightly different treatment than would be expected. February is currently available to watch on Netflix.