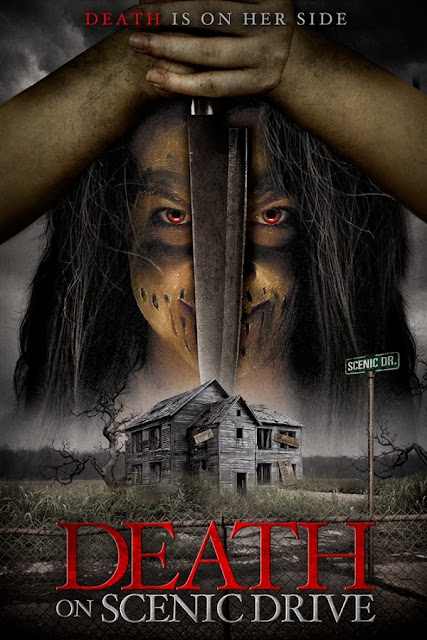 Wow, Gabriel Carrer's Death on Scenic Drive certainly went off script in terms of my expectations vs reality. Here I was all settled in for a home invasion horror and instead get a trippy art house kaleidoscope. It is all held together by one of the greatest soundtracks I have heard for a long while courtesy of Starsky Partridge, though sometimes it did feel like the film was created around this music and not the other way around.

Larissa (Stephanie Ash) has gone to the countryside to house sit for a family who are out of town, the only company she has is the family dog (Keena) and the next door neighbour; farmer Dallas (Ry Barrett whose credits include Carrer's The Demolisher and the fantastic Exit Humanity). Something begins to happen to Larissa though, as the days go on her actions become more and more odd...

The plot is extremely basic with events left up to the viewers imagination for the most part, though there is enough hinted at to give a more complete picture. Needless to say it was only after going onto IMDB afterwards that I stumbled across the official plot synopsis (that was spoiler filled by the way!). This is the type of slow burn horror where an isolated character has to carry the whole film. There is barely any dialogue over the 75 minute run time with Larissa being totally alone for much the time. This doesn't become boring though and that is mostly to do with the great soundtrack that makes even the most mundane activity (such as going for a jog) seem like the most tense and dangerous thing in the world. The music reminded me heavily of 80's synth and maintains a pace of urgency and unease throughout with its John Carpenter style repetitive beats that never get old. The few moments of silence become almost suffocating without this musical heartbeat dictating the tone.

With the music so good though it did at times overshadow the actual visuals here, it felt at times Death on Scenic Drive had been accidentally filmed before a plot had been written for it as there is a lot of Larissa just skulking around the ominous house not really doing much. Events do happen though and there are some fun and gruesome scenes of violence such as when she starts eating an animal she has killed. You see this started very much feeling like a home invasion film, Larissa is meant to be alone in the property yet she is forever hearing footsteps and doors opening and closing that suggest she isn't. To add weight to this notion there are a couple of stunning looking scenes that put this movie at its most art house, these have Dallas lit up by strobe lighting slowly moving while facing the camera. These scenes go on for a long time but look so effective, especially the one where he slowly starts to smile as the scene blinks into darkness then back into light repeatedly. However it becomes clear soon enough that home invasion is the last thing that Larissa herself needs to fear.

To accompany Larissa's slow descent into a special sort of madness there is some effective use of lighting with the film favouring cold blues and reddish orange hues. The blue helps with the snowy landscape outside, often you will see stark blue light shining into the house from the outside. The reddish orange meanwhile signifies change in the temperance of the girl. One scene for example has her in a normally lit room staring at her reflection in a mirror, she slaps herself hard around the face and suddenly the room is plunged into this red light, each additional slap giving a metallic boom noise. It wasn't long ago I stated I didn't get on with art house, but there are some types of it that I do enjoy such as when it is done using extreme colour changes and with music marrying so well up to the visuals (walking through the snow at one point each footstep corresponds with a beat of the music).

With a small cast you needed some good acting. With Larissa and Dallas barely saying a word over the whole film this was mainly achieved. Ash is a great visual actress but due to her actual character it was hard to see what she was like as a person before the weirdness began, especially as she never really betrays any emotion on her face. I liked her character enough to begin with that I feared for her safety. Her character had some captivating moments, maybe my favourite being when she is crawling on all fours towards the camera, then breaks the fourth wall to stare directly into it, felt like she was staring at me! Strangely though my favourite actor in Death on Scenic Drive is the dog, no slight is meant by this just that she gives such a great performance that she stole the show, I want that dog!

If it hadn't been for the clever use of lighting, some great cinematography and the awesome soundtrack this movie wouldn't have been anywhere near as good as it was. The plot was pretty bare bones with a lot of the film just being someone creeping around a house, but was helped by some good special effects. This wont be for everyone as it gets to be a bit of an exhausting grind at times, for myself I really liked it, just narrowly missed out on me loving it. Death on Scenic Drive was released on 17th November via VOD thanks to Terror Films