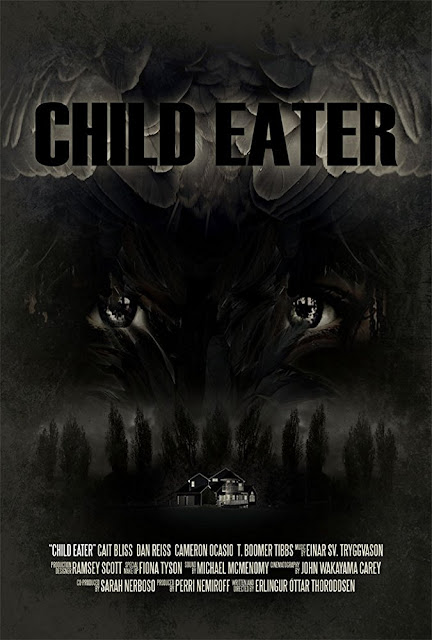 Child Eater has recently been made into a feature film but originally it came out as a 14 minute horror short. While there are problems with this short it is easy to see how it could have been built into something grander than what was here.

Written and directed by Erlingur Thoroddsen Child Eater stars Cait Bliss as Helen; a babysitter who is looking after Lucas (Cameron Ocasio). One night the boy is insistent a monster is in his closet, she humours him but it isn't much later when she finds him abducted. With her boyfriend Tom (Dan Reiss) she runs out into the night to track him down, it seems he has been taken by an urban legend; a blind old man named Robert Bowery who is said to eat children's eyeballs in a bid to restore his lost sight. 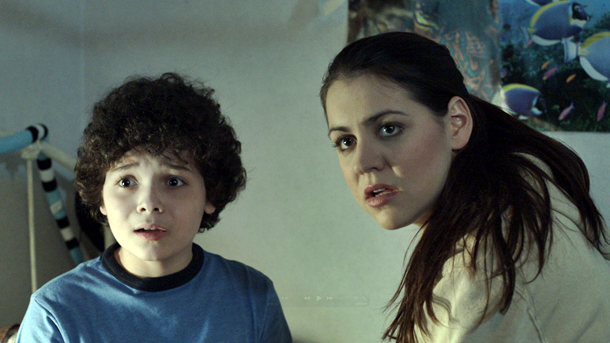 It's good that this was made into a feature as there is a lot of lore stuffed into the first few minutes of this that feels a little over the top. As well as the legend of the old man who eats eyeballs Helen also sees fit to awkwardly add in an additional story about a black stork that eats children's eyeballs. Her and Tom have barely any chemistry between them, they seem like chalk and cheese with Helen being deadly serious and Tom being more of a joker. She also seemed like a bit of a sociopath as while running out into the woods after the abducted child she gets into an argument about pregnancy rather than seeming concerned about the child. Later on when someone dear to her has perished she seems to show no emotion to this change in events.

The best thing about this is the boogeyman character played wonderfully by Boomer Tibbs, he has quite a freaky look about him with his bald head and thick glasses and his first introduction here is quite fun with him licking Helen's face! This goes through a lot in it's short run time, it all ends on a pretty generic note but was still enjoyable. The short version of Child Eater is currently available to watch on Shudder. It would be interesting to see if with more room to breath this became a better experience, it seems Cait Bliss also plays the hapless babysitter in the full version too.