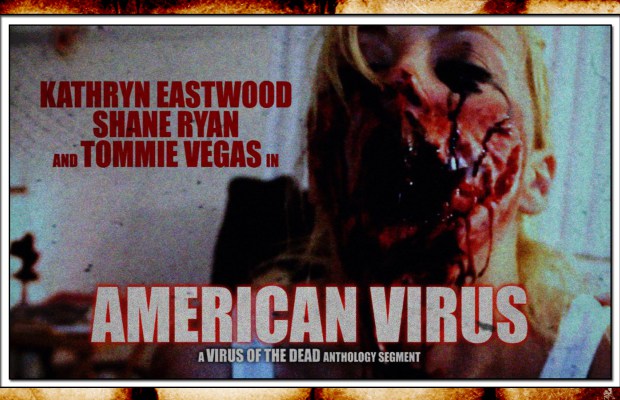 I am getting sent a lot of short horrors for review at the moment which is never a bad thing really. As I have stated on many occasions before having such a limited time to tell a story really forces you to be creative in what you build. American Virus is a POV zombie film that I enjoyed, but which did feel more like a clip from a larger film than one that feels self contained.

A virus that turns its victims into flesh hungry crazies has been unleashed on America, but unlike the norm it has been successfully quarantined. That is until a small grassroots terrorist gang decide to escalate events themselves by stealing a sample of the virus with the aim to spread the infection to the whole country.

It was cool to see a couple of notable people have worked on this film, the biggest draw I guess being the daughter of Clint Eastwood; Kathryn Eastwood who not only stars as the main antagonist, but also co-wrote this with Shane Ryan (Red Oedipal, Ted Bundy Had a Son) who himself also co-stars and directs this. Tommie Vegas (Party Night) also makes an appearance that was nice to see. It was interesting to get a film shot from the perspective of the bad guys, though aside from the broadcast message the group have filmed for the media a lot of this camera work is very shaky and indie in that it is people running around. There is kind of a message here about the half life existence of the daily grind for the average person, but there wasn't too much time to fully explore that. There are a few different techniques used here, this includes editing that shows events out of order, black and white sequences, and news report style parts.

For me the music was the least effective part, it was all very dramatic and serious, but did come across as a bit generic. In terms of visuals though this was attractive enough when shaky cam footage wasn't being used, and the zombie/infected make-up featured plenty of great looking blood. American Virus also featured the best on screen kiss I have seen for a while, love really does make people act crazy! With a guerrilla type feel this zombie short feels different enough, and at just five minutes long left me wanting more. American Virus is to show up as a segment in upcoming zombie anthology Virus of the Dead that is due for release 2018.