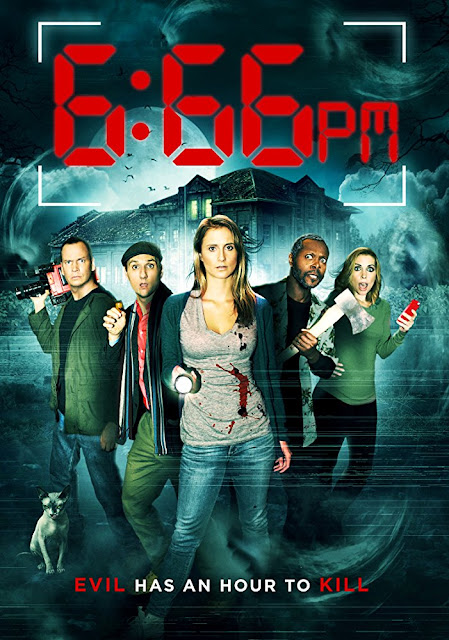 The award winning 6:66 PM is a comedy horror directed by Jim Klock (who directed and starred in Massacre on Aisle 12) and co-written by Tommy McLaughlin and Chad Ridgely (who also co-wrote and starred in Massacre). It is worth pointing out that other film, as like that this one is full of over the top manic people running around screaming, and full of humour that didn't resonate with me too much. On the plus side again just like Massacre I found myself enjoying this one despite how silly it is, you can't help but get caught up in the silliness and forget about everything outside of the movie.

A reality paranormal investigation crew have chosen the house of notorious serial killer Jimmy Timmy Beck (Scott Burkhardt) to film their new show. The crew include producer Lorraine (Autumn Federici who also co-produced this), cameraman Peter (Chad Ridgely), and two actors pretending to be legitimate investigators; Daniel (Jim Klock) and Sheryl (Alexis Kelley). However they have chosen the night that marks the five year anniversary of Beck's suicide, a night in which the criminal brother of one of his victims (Michael Buonomo also from Massacre but in a much more memorable role here) has decided to enact a ludicrous plan to summon Beck's spirit back into the land of the living... 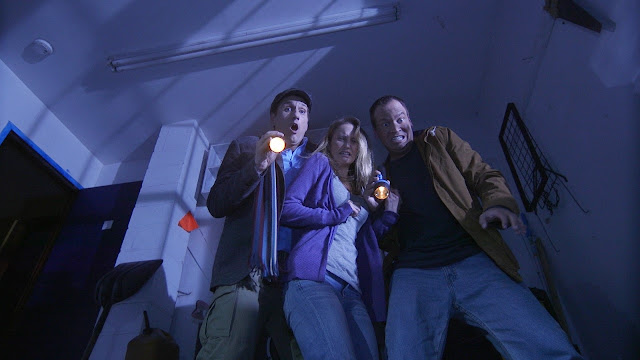 For the first twenty minutes to half an hour I was not enjoying 6:66 PM, I felt it just was not funny, or particularly interesting with little plot to it other than the cowardly crew investigating an empty building. Thankfully after an early red herring sub plot of a murderer, Beck's spirit does indeed return. This takes the form of him possessing the bodies of the recently deceased which gives the film a very light The Thing vibe in that each time he is defeated he returns as someone else. Each and every character that ended up possessed gave a fantastic performance, the over the top craziness of the character of Beck was reflected so well that no matter who was playing him they all seemed to be the same person. I especially loved the voices put on for this dead serial killer. The heroes are the usual assortment of cowards and liars which lends the film a feeling of Scooby-Doo with adult overtones but does lead to lots of scenes of people either running around screaming or hiding in silly places (like behind a shower curtain, or on the backseat of a car).

I found myself caught up in the lore of the story a bit, the idea that the spirit is only able to remain in the world for just an hour meant I did feel some anxiety when the time was ticking down. In terms of time that title was one of the more amusing jokes, such as one character who states something like "shouldn't that just be 7:06?". A lot of the time I understood the jokes that were being gone for but they just didn't make me laugh at all. Practical jokes such as grabbing a ridiculous item to defend yourself with (such as a wooden bath brush or salt shaker) have been done in so many other horror comedies, while sex based jokes are never my thing. There were some good ones though, a late part involving a cat for instance was funny, and the notion that the deceased serial killer's MO was to only target transvestite midget circus clowns also stuck out for just how ridiculous it sounded, and how characters are constantly trying to say that in a p.c way. Though those aforementioned clowns are hinted at as being also summoned back into existence all you hear of them, and of a zombie cat roaming around are voices, I guess the double whammy of being hard to cast for, and budget constraints explains why neither of those made an appearance, truthfully it actually kind of worked that these are roaming around but never seen, added to the silliness of the whole situation. 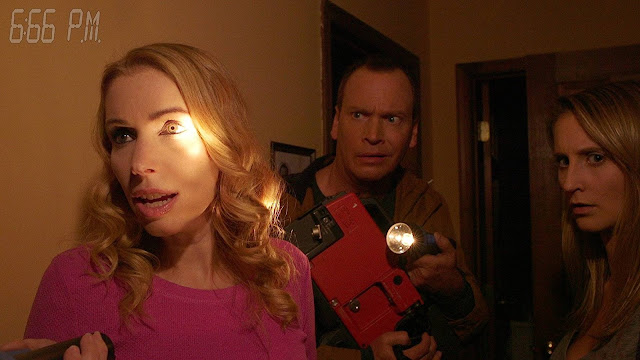 Much as I said with Massacre on Aisle 12 this isn't the most amazing film in the world, however Ridgely's writing and Klock's directing really help in dragging you into the inanity of the place. There are some great over the top performances and it was nice to see some of the manic cast reunited once again. However the humour does fall flat a lot of the time and there is only so much random running around that can happen until you wish for something more substantial to fill the time. Still this was another fun dose of escapism and so there are far worse ways to spend your time. 6:66 PM is now out on Amazon and VOD.