The Survivor: A Tale from the Nearscape (2017) - Post Apocalyptic Short Film Review 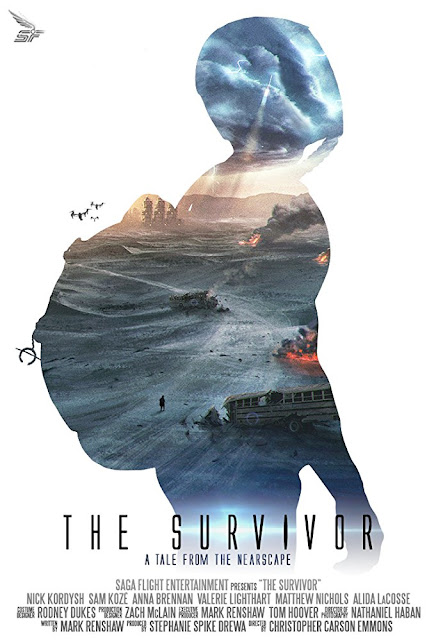 Christopher Carson Emmons directed short The Survivor: A Tale from the Nearscape is a near 12 minute award winning post apocalyptic film that stars a silent protagonist and looks quite impressive at the sense of world it creates. It tells a simple story but one that comes across well thanks to the directing.

This takes place in a post apocalyptic world where the outside air has become toxic to breathe. A young boy goes on a supply run to gather water and medicine for his sick mother, avoiding infected, cults, and the brutal police force as he does so.

The best part of The Survivor is the set dressing and costume design, some such as the police uniforms are great looking, while the dilapidated wastelands the boy travels looks authentic enough. For a 12 minute film there is a lot that happens, such as three separate chase sequences, a couple of dialogue scenes and some nice but brief action. A lot of the narrative initially comes from the boy's toy robot that has an A.I chip built into it and so provides information about the world the boy is travelling through. This is provided by a voice that has been added over the footage and so seemed a bit odd at times. In a Fallout type of way I loved the idea of an A.I infused children's toy though. So at first the suspense comes from the decreasing oxygen supply the boy is fitted with, the infected of this seem more ill than anything, though a sequence where a narrow alleyway leads to hands bursting out of walls and even a tyre create a type of zombie vibe.

At times the acting wasn't the strongest but the many characters felt like they belonged in the world, especially interesting was the supply shop that had a kind of washed out Z Nation vibe to it. The police chase towards the end felt at odds with this complete sense of law and order having broken down but it gave meaning to television interference shown earlier and at the end of the short, hinting at a bigger cohesive world than what is shown here. It also of course is an indication of the total divide between the general population and those still in control.

With some nice special effects, unobtrusive CGI, and a hero's journey The Survivor is a nice little foray into a doomed world, one that is helped, not hampered by the main characters muteness. This short is currently being shown at a variety of film festivals, and is available to watch on YouTube.