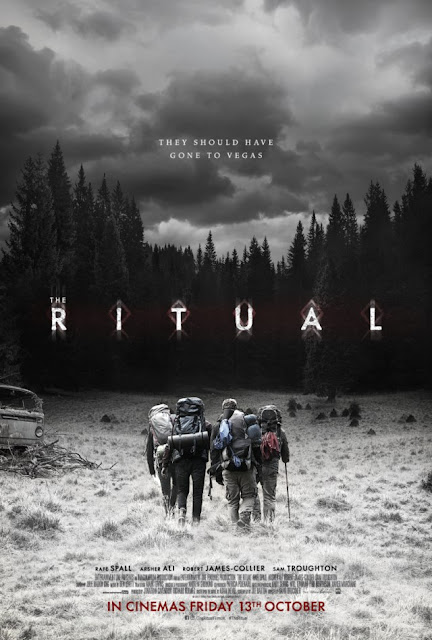 The Ritual is a British made horror directed by David Bruckner (The Signal) that takes place in some vast woods in Sweden and seems to be very much based on the folklore of the area, and is also an adaptation of the book of the same name (a book written by Adam Nevill who has glowing recommendations, I shall have to check out some of his work). It features beautiful scenery and some great characters, but can the 'lost in the wood' plot device work well any more after countless other films with the same idea?

Four 30 something friends have decided to go on a hiking trip in Sweden, they include Luke (Rafe Spall), Hutch (Robert James-Collier), Phil (Arsher Ali) and Dom (Sam Troughton). The trip is in memory of their friend Robert who was murdered during an armed robbery at a convenience store him and Luke had got caught up in. On the way back to their hiking lodge Dom badly twists his ankle, the group decide that rather than stick to the route, they are going to take a short cut through a nearby wood. However the deeper into the woods the group gets the more weird things start happening to them, and the more they start to suspect they are not alone... 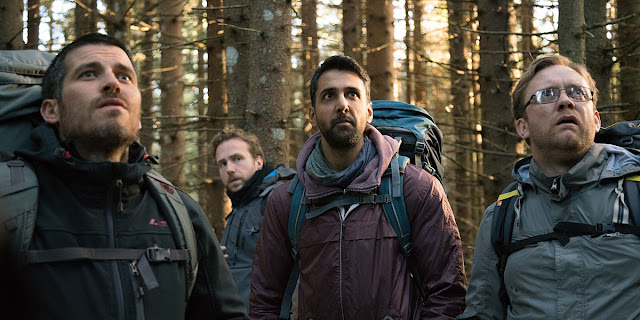 The cinematography in The Ritual is stunning, that's the biggest thing I took away from watching this. The woods may be large and very foreboding but it looks amazing and there are no end of neat camera shots to show us this. In many ways this felt like The Blair Witch Project done with a budget, obviously it is not found footage in style but it has many of the same story beats such as local legends, the discovery of weird symbols, people getting lost in the woods, members of the group vanishing mysteriously etc. The first two thirds of this kept my attention far more than the final third, I actually enjoyed the being lost aspect better rather than starting to understand what is going on. I loved how there was a gradual drip feed of terror to the hapless heroes, it starts with discovering a fresh animal carcass pinned to a tree and culminates with the foursome spending the night in a creepy cabin that happens to have a strange altar upstairs. Waking up after all having had similar nightmares there was an element of Book of Shadows: Blair Witch 2 to things at the absolute insanity that occurs. Phil for example being discovered naked, praying at the strange altar, but with no memory of how he came to be doing that.

Later on there is more of an explanation and while there is a grand job done of keeping the monster hidden from view eventually it becomes such that you get a decent idea of what it looks like. I was actually pretty impressed with how many times the threat is subtly shown on camera, one great part had it full on screen in the background, yet it is so well disguised by the surrounding trees that you only know it was there the whole time when it suddenly moves. I don't want to go into what it looks like much more than that, though I will say if you have played The Witcher 3: Wild Hunt then you would have fought something very similar in look to it. Also interesting in regards to this creature is that it appears to have the ability to cause hallucinations, a device that is used to great effect for Luke who already suffering PTSD from his armed robbery experience begins to see that in various clever ways replicated and melded into the confines of the woods the group are in.

It is both the characters and their dialogue that really made this for me, the four friends are full of banter and come across like 'lads' grown up. As such they have life experience that dull vapid young adults rarely possess, and they have enough history with each other to know each other's weaknesses. This is perhaps best shown with Dom who is the cowardly one of the group and the one that the rest are used to dealing with his complaints. Luke was also interesting in how the guilt of the past is hanging over him, it even affects him in the present as he is determined not to make the same mistakes and instead confront the threat. This leads up to a great finale, though as I said the final third does lose itself a bit in the run up to this finale with a bit of down time that slowed the pace a bit much for my liking after the thrill of the hunting section (though felt like Resident Evil 4 brought to life).

There is something that feels a bit old school about The Ritual, it is a film that is happy to follow the conventions of the horror genre yet doesn't rely on cheap jump scares. Instead it builds its characters into people who seem real, before plucking them away one by one. The atmosphere and tension is mostly well sustained, aside from the small blip this is a solid horror film that does what it sets out to do.

The film is based on a novel by the brilliant and 'scary as hell' Britsh author Adam Nevill. Shame the writers rarely get a mention. The first film if many I hope by This author. His novel 'Last Days' is terrifying!

Yeah my review got pointed out to him, already planning to add his name in when I get a chance later on today. Will be checking out his book too as have heard good things of him.