A second day of news and trailers for various films, yesterdays post was so well received that an encore was demanded, demanded! Or maybe it is due to going to a late screening of Flatliners, followed by a planned streaming of the PSVR Paranormal Activity game meaning I wont have time to do anything more substantial.

The First Date is a horror comedy anthology coming from Reel Nightmare Films (Hotel Camarillo) that has been released on Amazon Prime, Amazon Instant Video (US, UK and DE), and worldwide on Vimeo On Demand. The film's synopsis reads "Tired of the online dating world, a hopeful woman decides to give it one last try with a stranger who owns his own theatre has a collection of very strange short films." It is very hard to get an idea of what type of film this is going to be from the trailer, I'm assuming the short horrors all revolve about dates, the blurb says this includes paranormal scares, science fiction, thriller and b-movie comedy. 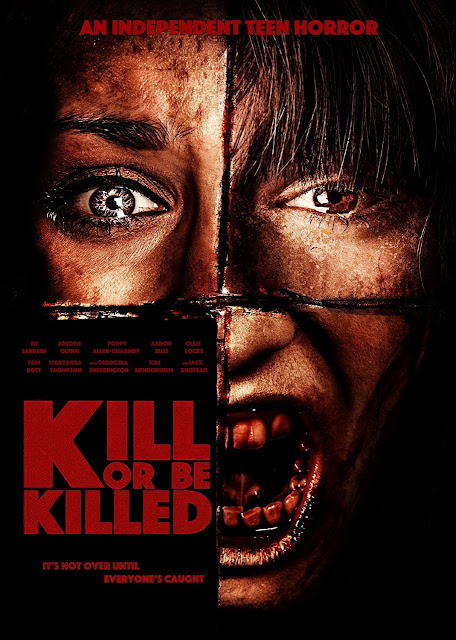 UK teen horror feature Kill or Be Killed is now out on DVD in the UK. Apparently this was first made way back in 2013 under the name Tag but has only just been released. It was directed by B.L Parker and written by Aaron Ellis (who also acts in this). Other actors include among them Ed Sanders (Sweeney Todd) and the very prolific Kim Sonderholm (Harvest). The story sounds interesting; 5 years after a group of teenagers were found dead in mysterious circumstances a paranormal investigator interviews the only survivor, who happens to be in prison having been convicted of murder. This survivor insists that the friends were forced into a deadly game of 'tag' by an inhuman force.

Bye Bye Baby is the latest short film from director Pablo S.Pastor (his previous film being the award winning Into the Mud) and is part of the 2017 Sitges Festival's Official Selection. In the short a woman plans to spend a quiet night home alone, but after a friend's call things start to go very wrong and she starts to wonder if she is actually really alone in the house. This is described as a homage to horrors such as Scream and Halloween with the intent to make the viewer never want to be home alone ever again! The trailer certainly works at making you intrigued.

Unique director Lawrie Brewster's (Lord of Tears) latest film The Black Gloves is to make it's premiere at Horror Channel's FrightFest Halloween event in London, UK on 28th October. This black and white film is a prequel of sorts to Lord of Tears taking place in the 1940's, and tells the story of a psychologist obsessed with the disappearance of a young patient and the owl headed figure that haunted her dreams. Tickets for the FrightFest event can be found here if you want to go and see this. Meanwhile check out the awesome trailer, I really love this trailer, the bird type whistle is perfect here.

Finally to close off today's batch of film news comes the trailer for Buckout Road that marks the directorial debut of Matthew Currie Holmes and stars among others Danny Glover (Lethal Weapon I-IV), Evan Ross (The Hunger Games: Mockingjay) and Colm Feore (House of Cards, Thor), as well as features the always awesome Jessica Cameron (Truth or Dare) in a guest appearance. I have just seen the trailer and you can colour me impressed, this looks like it might actually be pretty scary, and a well made scary film at that. The plot revolves around a group of students whose research into the most haunted road in New York State; Buckout Road leads to a series of horrific urban legends about the location coming to pass. This award winning film is due to be shown on October 7th in Nashville, Tennessee as part of International Black Film Festival (tickets can be brought here) and on Friday 13th October in Toronto, Ontario as part of Commffest 2017 (tickets here).