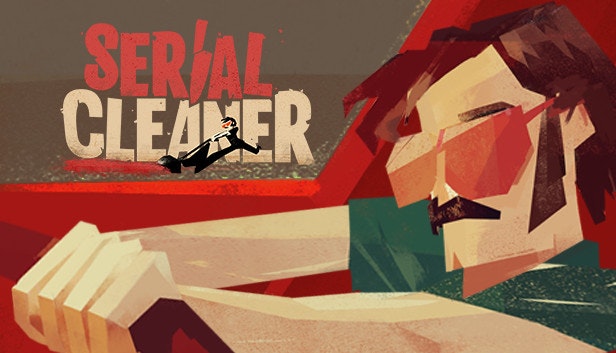 I liked the premise behind Serial Cleaner, and I also liked the visual style. In my head this was going to be similar to Hotline Miami except rather than killing buildings full of goons you would instead clean up buildings full of dead goons. While this can be a lot of fun it can also be immensely frustrating at times and it was this divide that meant it didn't endear itself to me as much as it could have.

Set during the 70's you play as a man known as 'The Cleaner'; an expert at removing bodies, blood and evidence from newly created crime scenes. Mainly he does jobs for the Mafia, due to being deep in debt with them over gambling losses. One day however he get contacted by a new client, and it turns out the mess they leave behind is far more barbaric than what he is used to. With evidence pointing to the fact the Cleaner is helping out a sick serial killer his conscience slowly starts to get the better of him... 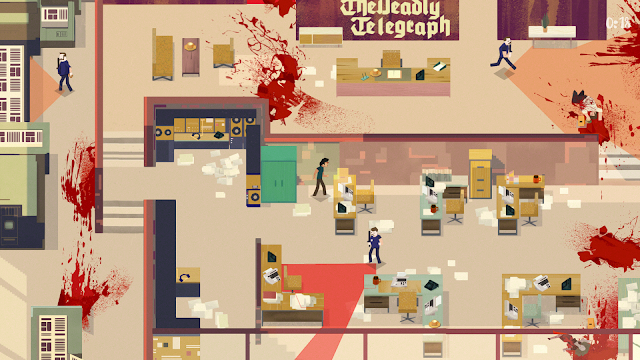 So this is 100% a stealth game that takes place in an elevated viewpoint that reminded me a lot of Party Hard. Each of the 20 levels takes place in a different location such as a farm, TV studio and rooftops. In each level you must avoid the patrolling guards while collecting evidence, hiding bodies and cleaning up blood. You have a vacuum with which to suck up spilt blood, with a set percentage needed for each level. Bodies can be picked up and either taken to your car and put in your boot, or placed in one of the environmental disposers. In the nightclub for instance you can dump bodies in the piranha tank, while in the Mafia hideout you can put bodies in the meat grinder in a butchers shop. Each time you are caught the level restarts, but for more difficulty bodies and evidence will spawn in a slightly different place each time, and the time of day will also change up.

The frustration for me came from the guards, the cleaner has no weapons or special abilities so your only option is to avoid the sight cones, and not get close enough that they would hear your footsteps. Objects can be moved to block enemies from getting to you, while things such as speakers and radios can be used to distract them. You have the ability to hide in a variety of objects (such as cardboard boxes) and thankfully the enemy A.I is dense enough that even if you hide right in front of them they don't know where you have gone. To me at least it seemed at times guards were able to see me through solid walls that was particularly annoying. There are also shortcuts that warp you around the levels quicker. All these elements are gradually introduced as you play through the 2 to 3 hour campaign. There are a small handful of different enemy types, you have the disco cops who can move quite fast, guards who will call for backup rather than chase you if they see you, and later on guards who will shoot you dead the second they see you. 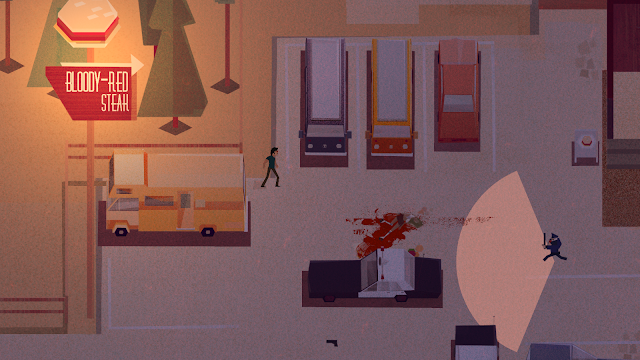 Hotline Miami comparisons come more in terms of plot. After each level you go back to your mother's home where you can interact with items to get more story about the world, usually what you have just done, or what you are about to do is mentioned on the radio, newspaper or TV. Initially this was far more mundane with the Mafia story but when the serial killer angle got introduced I found myself swearing through the levels determined to see what was going to happen. The music is fitting for the time period but for me there wasn't really a stand out tune, it all faded into the background a bit for me. There wasn't really a huge amount of variation in the levels, mostly it all felt pretty similar, there were a few different parts towards the end (such as one level where you are avoiding security cameras rather than people for instance). The most fun levels are ones you have to unlock by collecting hidden film reels in the levels, and fittingly they are based on iconic films. These were cool extras and let you be in such iconic places such as the cantina from Star Wars and the ship from Alien with text changed up to reflect this.

I did like playing Serial Cleaner but at many times things did get quite frustrating, and it also felt quite short. I have never liked stealth games so this isn't the perfect fit for me anyway. If you liked Party Hard but didn't like the killing then this would be for you. As for me I had hoped for more involved slow paced, methodical cleaning rather than the speedy arcade like feel this has.