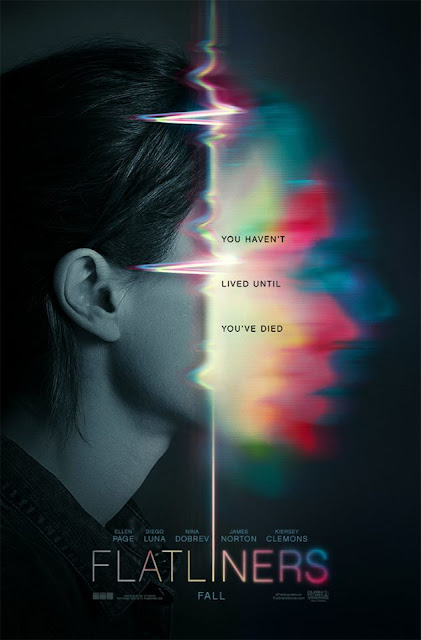 I mentioned in my second news post of the week yesterday that the reason there was no review was due to the showing of Flatliners being on too late at my local cinema, and so now here is that review. When I was a child I remember my parents owning a VHS of the original Flatliners but aside from the first five or so minutes I never actually saw it. I had no idea whatsoever it was a horror so when I first watched the trailer for this re imagining I was quite surprised, and also interested.

Courtney (Ellen Page) is a junior doctor who has been researching the concept of the afterlife in her spare time after having lost her sister in a car accident she caused 9 years previously. She decides to carry out an experiment in which her heart is stopped so that she can have her brain waves analysed while she's dead, before being revived. She enlists the help of several other junior doctors; rich Jamie (James Norton), shy Sophia (Kiersey Clemons), serious Marlo, and intelligent Ray. The plan is carried out and Courtney returns to life having experienced something amazing, not only that but she is changed and has a new zest for life, while able to access parts of her memory that had been locked away (Limitless style). One by one her friends also have a go and for a little while all seems great. However they seem to have brought something back with them, something which wants to punish them for their most deepest, darkest secrets... 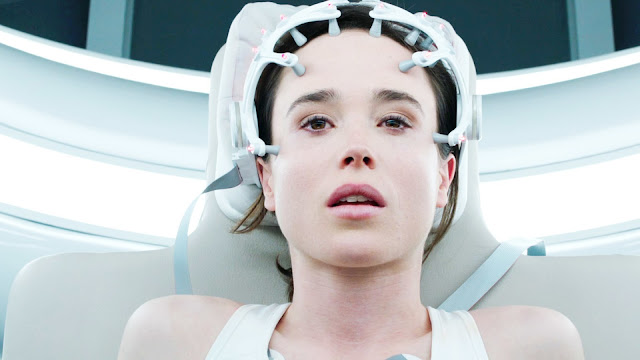 To me Flatliners felt like a cross between Final Destination and A Nightmare on Elm Street. The former in that the death that stalks the group is faceless, appearing as the form of the person the individual feels they have wronged in their past. For Courtney it is her sister, she gets frequent hallucinations that occur at any time and get increasingly more terrifying. For Marlo it is visions of the patient she accidentally killed during her second year as a junior doctor. There is the Final Destination vibe in that it is the environment that is the threat for the group, such as when Marlo hallucinates someone has put a bag over her head while she is driving causing her to nearly crash. The A Nightmare on Elm Street vibe comes from the afterlife experiences themselves, each starts off beautifully before slowly twisting into a Hell. Such as Jamie who is cheesily driving a motorbike through a deserted city with a beautiful girl clinging onto him, before he finds himself in a dilapidated neighbourhood all alone.

These afterlife moments are all quite trippy with lighting that is over exaggerated, and blur effects with movement. It is then the aftermath of this that draws comparisons with drug use. Each person comes out their afterlife experience like they are high on drugs. Early on each of these results in a party montage scene of the group having the time of their lives with random affection given out and a sense of the affected person being more at one with themselves and the world around them in an LSD type way. Jaime even has a bit of dialogue at one point where he contrasts the scary hallucinations as a side effect of the trip. For two thirds of Flatliners this is all it is about, it is the final third where this changes more dramatically into a supernatural thriller.

There was a surprise plot event just past the halfway mark that had the result of changing this from a film with one main character (Page) into one where the main group all become main characters and share screen time amongst themselves, I thought that was quite a good idea. However the story as a whole felt quite stretched out to fit the nearly two hours, but it wasn't like there was a lot going on to warrant this. It did then feel at times slightly dull, especially towards the end where my attention began to wander and I had to resist the urge to clock watch. Some plot points rattled me a bit also, such as Marlo who keeps driving like an absolute mad woman, causing no end of near misses yet there is never any indication of anything coming of this. For a film that is about coming to terms with your past mistakes and making amends it sure doesn't care about any mistakes the characters make in the present. The script while fine enough for the most part had some occasional lines that really stank and seemed so amateurish.

So it is the final third where the horror steps up and while the woolly nature of subconscious guilt making itself manifest was not really explained well there was a genuine sense of threat present with you never knowing when the next attack would happen and to who. This part actually caused a small part of unease for me, and this is combined with a few jump scares (not too many thankfully as they are forever cheap), one of which got me leaping. Saying that, I don't know what's up with me lately but I seem to be getting scared at stuff more easily, think it must just be a blip. The persecuting figures all look freaky in their own ways, like demonic zombie people, some nice make-up effects there for them. It resolves itself all a little too neatly with the first solution attempted to end the terror turning out to be exactly right, no end twist here to suggest anything is but as rosy as it appears. 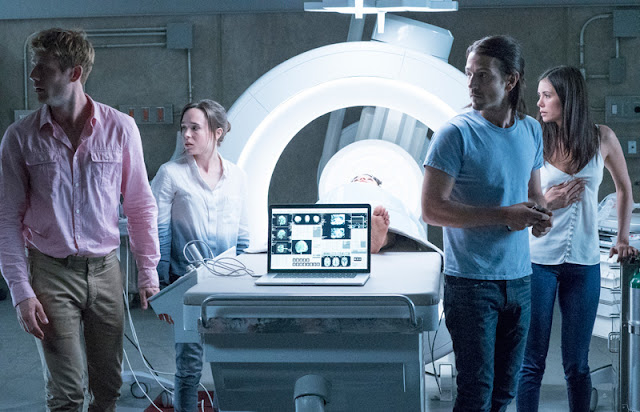 In terms of this being a good or bad remake I have literally no idea, it was fun to see Kiefer Sutherland in a medium sized bit part here, though it was more confusing for me more than anything as I wasn't sure if it was indicating this was a secret sequel to the original or not (turns out it isn't, he plays a completely different character here). Elsewhere being a fan of Grey's Anatomy I couldn't help but get distracted by the parallels between this and that show, especially with Marlo's secret being similar to a storyline from that show. I felt this could have worked better if there was more of a reason behind the evil given, and if this had been streamlined into something that didn't just feel overlong without a substantial reason for being so. Regardless there were some enjoyable moments to be found around the fat here, it was a nice enough gift getting even a little sense of Final Destination and A Nightmare on Elm Street (two film series that I do quite miss).

Posted by Daniel Simmonds at 15:30