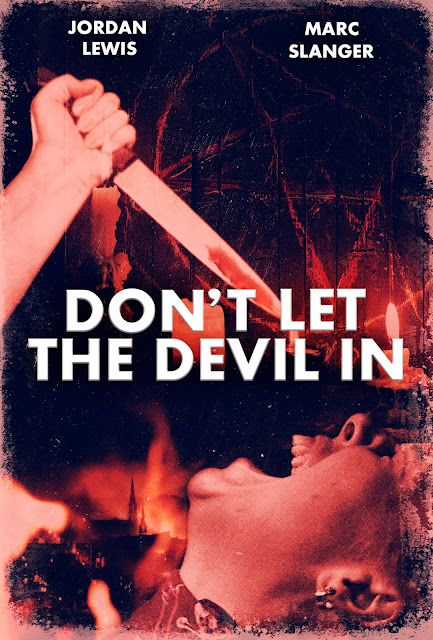 Why was that film so weird!? Is what I exclaimed when the end credits rolled for Don't Let the Devil In. Courtney Fathom Sell who wrote, directed, produced and edited this among other things certainly has a unique way of making films if this is anything to go by. At once this has traces of both The Wicker Man, of 80's Italian horrors and of a living nightmare wrapped up in a near arthouse style bow.

New York based John Harris (Marc Slanger) and his wife Samantha (Jordan Lewis) relocate to a small Appalachian town where John is to oversee the development of a casino as a land developer. They hope the change of scenery will allow them to heal after their loss as Samantha had recently had a miscarriage. However it soon becomes apparent that neither of them are welcome at all in the town, the casino is heavily opposed by the town folk, mainly due to the relocation many of the townsfolk face. They see John as the person to focus their hate onto. Aside from the outright hostility they face the couple soon come under more direct attack from what appears to be a group of Satanists. 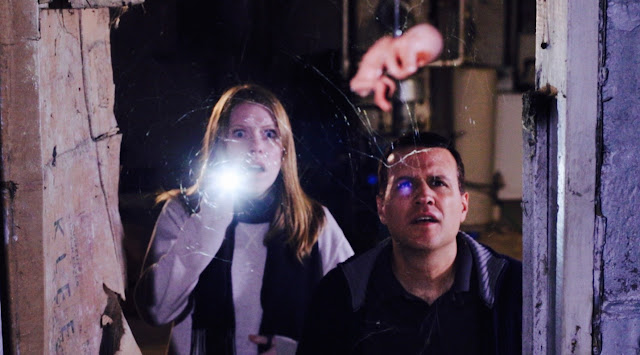 The editing is maybe the best thing about Don't Let the Devil In, it is what made this so memorable to me with the audacious decision to feature several really important scenes off camera, and then just either suggested, or mentioned by characters as having occurred. This starts off early on when Samantha mentions seeing what appeared to be a strange altar hidden at the back of the local general store, as she recounts this discovery there is a quickly edited together sequence showing what she is describing. This happens time and time again, such as when John is arrested for being drunk in public, one scene he is laying on a bench, next scene he is behind bars, and another when he is just about to be attacked, then the scene cuts to the next day and him waking up all bloody by a river. This even applies to the big finale, it is all set up for something spectacular to happen then just fades to black with the viewer left to piece together what actually occurred by who is on screen and what they are doing. I loved this blase way of storytelling, not only does it make good use of a low budget but it also assumes the viewer isn't a complete idiot and lets them infer the events.

The acting it has to be said is not the best I have ever seen, it range from not bad to really awful with it changing rapidly from character to character. For the local townsfolk this works well, especially with over acting, there is a quite creepy vibe to the town, everyone has a sly smile to their face, everyone seems to be in on a secret that John and his wife are not privy to. The psychiatrist (Mark Baker in a scene stealing role) for instance insists he is not revealing John's most personal secrets to the town yet it is blatantly obvious he is. Elsewhere you have the town Sheriff who keeps promising John that things are going to get a lot worse for him, even the local priest seems to be secretly filled with malice. Everywhere John goes the streets are deserted, the pubs and cafes full of people amused to see the hapless man, there is a real vibe of isolation. This is where the strongest whiff of The Wicker Man and even Straw Dogs comes into play, yet in John you have someone who has less morals than other characters, in fact John is quite a bizarre person which does repel any pity or indeed likability for his character. I didn't really understand what John was meant to be, as a main lead he is pretty dull and emotionless and the way he reacts often baffling. Finding something very not normal in his basement for example leads him to covering it up rather than acting with much panic. Later on his wife vanishes in mysterious circumstances, this results in John going to the local cafe for a coffee, followed by a trip to the pub, sure he is a bit mardy, but like someone who has had their keys or wallet stolen rather than someone whose wife has most likely been kidnapped! 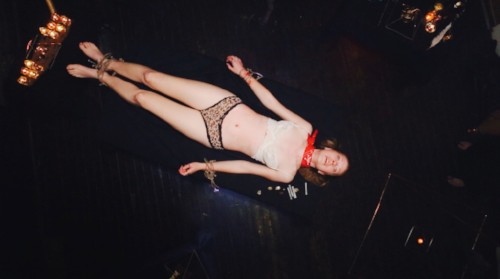 This weirdness of character is what lends Don't Let the Devil In its dream like atmosphere, nothing ever feels quite right but that stretches to the 'hero' as well. I half expected it to all end and reveal it was either a dream or some version of the afterlife. Nothing quite that strange yet it still manages to end on a surreal note. This dreamscape is helped by an atmospheric soundtrack that never sounds quite right, strange colour filters at times, and constant jarring cinematography such as a Blair Witch style spinning the camera around the tops of trees, and some nice and somehow disquieting 360 camera pans of scenery. Some more experimental moments also helped to make this all seem strangely unreal such as the schizophrenically edited scene of Samantha's ordeal.

While it is easy to see the budget constraints of this entirely self funded movie this impresses in that it never tries to be anything but a horror film, there is no pretence of normality. Admittedly that may grate with some, especially with a main lead who does nothing to endear himself to the viewer and with some actors that are more enthusiastic than able at their roles. However the tone of a close knit rural community being very abrasive to an unwelcome outsider from the city is perfectly portrayed, and the brave decisions in reference to key plot points happening away from the camera mean that while Don't Let the Devil In is rough around the edges it is for sure memorable. This is released today (October 3rd) on all major VOD sites thanks to Midnight Releasing and Brain Damage Films, and is exclusively available on DVD on Amazon MOD.