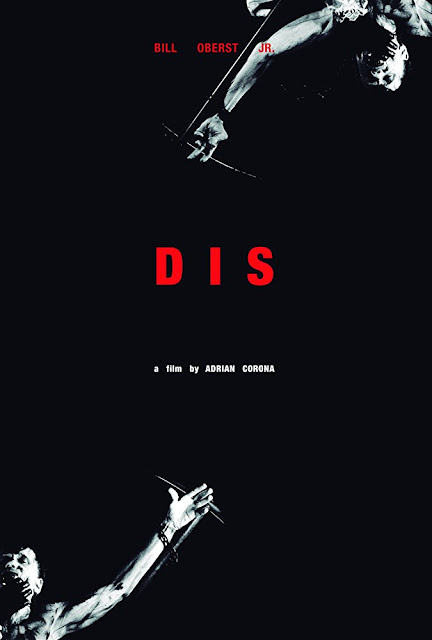 I first heard of Bill Oberst Jr. back at the start of 2014 when I saw his powerful performance as the star of arthouse horror Coyote. I am firmly of the mind that he isn't capable of giving anything but his all to his performances as here he is in his latest film; DIS (directed and written by Adrian Corona) and once again he gives an intense and gruelling show. This film is the most arthouse I have seen for a while and with that style I sometimes enjoy them, I sometimes dont. Still at around an hour long this one doesn't have time to drag, instead telling an abstract tale that flows naturally.

So this was a bit hard to follow and I will admit the plot summary comes from both my own experience of this, and of the IMDB plot blurb filling in some blanks. Oberst Jr. stars as Ariel; an ex-soldier with a criminal past who has taking refuge in Mexico, in some woods after a probable recent escapade. While out hunting one day he comes across a ruined building, while investigating it (after seeing the figure of a half naked woman) he is ambushed by a hooded man who wants Ariel's bodily fluids as food for his mandrake garden. 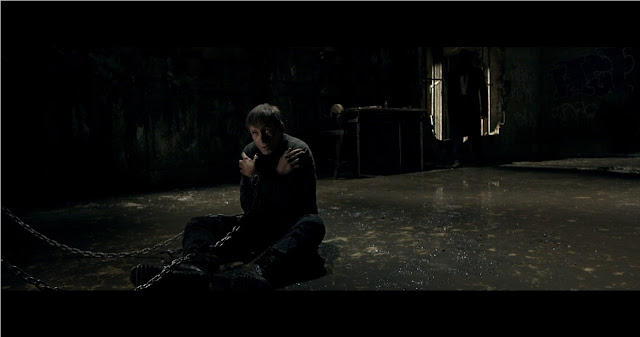 So this is about the legend of the mandrake plant that this film states is grown from the blood of murderers. Even without Bill saying this was an arthouse film it wouldn't have been hard to guess (he also says this was one of the strangest projects he has ever worked on). It has full frontal male and female nudity, discordant music, and quickly edited together abstract shots so ticks all the arthouse boxes. DIS takes place in two different times, the present that has Ariel and his accidental meeting with the mandrake gardner, and black and white segments that has Ariel arriving at a remote criminal den after needing to lie low. The only dialogue (aside from screams) occurs in the brief black and white flash back moments and so a lot of what is going on is up to the viewers interpretations.

Mention must go to the cinematography, with this mostly centring around a wood, and a nearby graffiti strewn ruin. There are some great shots of this building that lend themselves to some evocative moments as Ariel explores the place, on the hunt for who knows what. I don't know in what context the films title is meant, for me I know Dis as the main city in Hell, and so I saw Ariel's descent into the stone labyrinth he finds as a contrast to entering Hell itself. I'm sure I am very wrong on that matter, but that is the fun with arthouse films, it is all so interpretive. The atmosphere built up during these lonely walks adds a lot of interest that this might otherwise not have had, as at times this is exhausting stuff. 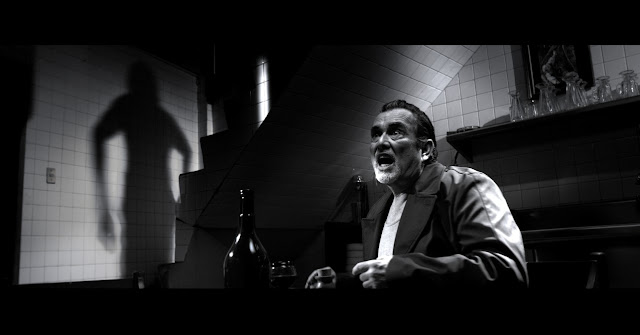 A chunk of the film has Ariel chained up and at the mercy of a hooded figure for reasons unknown, as had happened in the prologue with a naked woman who had been chained up in similar circumstances. This is where things get the most uncomfortable with both victims being abused for the needs of the figures plants. The whole film has a dirty, scummy vibe to it with the filthy ruin a great location for a horror. For me while I didn't find this pretentious, I did find it a hard watch at times, I felt like I was slightly out my comfort zone. Oberst Jr. puts in another great performance, I don't know what it is about him but he always seems like he is a product of whatever film world he is in, he never seems like just an actor, but as someone who has inhabited the movie world his whole existence.

I wouldn't say I enjoyed DIS, it isn't really my thing, however that doesn't take away the craftsmanship put into this movie, it is an attractive piece. It has a cohesive mood that never falters, while Oberst Jr. is the perfect fit for the troubled ex-solider escaping (or confronting) his past. DIS is due for release in 2018 and recently made it's festival debut at the TOHorror film festival in Italy.

Thank you for reviewing this strange little film, and for your honest attitude towards the arthouse genre. I'm not sure DIS is a film to be enjoyed in the traditional sense of that word, and I appreciated your saying so. Though still not sure sure what it means, I feel grateful to have been a part of a project that explores the potential of cinematic horror
as cinematic art.

with thanks for all The Rotting Zombie does for indies,
Bill

No problem, while it isn’t really my type of film I did appreciate the work that went into it, in all aspects the quality shows. All the best for the future!