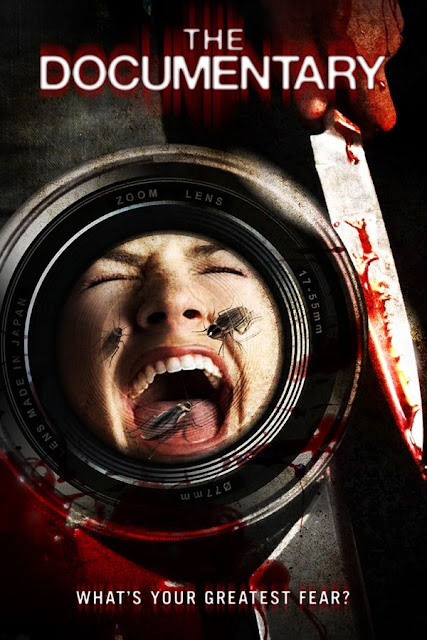 The Documentary is a horror film done in the style of a found footage that was written and directed by Walter Moise (editor and producer on Counter Clockwise). As usual even uttering the F.F word has caused the klaxons to go off and the steel shutters to drop down at The Rotting Zombie HQ. Nowadays the genre falls into one of two styles; normal people who end up recording something terrifying on their camera (Altar, The Blair Witch Project) and purposeful recordings done by a psychopath (Be My Cat: A Film for Anne, A Guidebook to Killing Your Ex). The Documentary falls into the later half but features a director who has none of the charisma, or indeed the screen presence that others in the genre achieve.

Serial killer D. (Aaron Bowden) holds auditions on the pretence of creating a documentary to explore conquering fear. He decides Sandra Novak (Tristin Rupp) is to be his leading lady. As far as she is concerned they are to meet up a few times to explore her darkest fears, but in reality D. has set up hidden cameras all around her home, is stalking her, and is engineering a series of misfortunes to occur in her life. 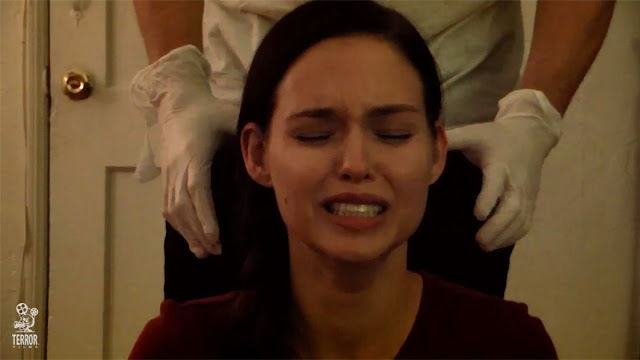 I think the very biggest problem with The Documentary is that D. rarely appears on camera, when he does it is only briefly and his face is always blurred out. He also doesn't address the camera much either, he chooses editing to tell his story. Adrian Tofei and Balazs Szitas in their respective films are making their movies for others to see, as such they are far more engaging and dare I say it relatable in part. D. is the absolute worst, I guess as he is a serial killer this is a good thing but as a viewer I couldn't stand him. He is very misogynistic and that seems his main personality trait, often he goes into rants about women calling them all sorts of names. His modus operandi is strangulation and we get to see that at many points here as while Sandra may be his main target he is also killing prostitutes and escorts on the side, usually by asking them to strip naked and then turning on them when they are at their most vulnerable. I didn't see the need for the full on nudity that occurred in these moments, again in the mindset of a serial killer filming this it can be excused. This just wasn't enjoyable to watch really as there wasn't any real motivation to care about anyone, I got traces of the abysmal Faces of Snuff in that this is violence for violence's sake without any sort of light, even if that had just been in the form of delusional tendencies.

This is set into three vague chapters; phase 1,2 and 3, yet for me there wasn't much of a ramp up in what was occurring. I found the chronological pacing to be at times confusing as the non-Sandra stuff bleeds into the main plot and so the killers brief little interludes of murdering other people felt out of place a lot of the time. The editing for the most part is functional and does some nice little things. One of D's visits to the desert to dispose of a victim was interestingly edited, and I liked one murder that played in reverse initially before then flowing forward to show more detail. I also liked the efforts to go to realism, especially effective in this regard with the many photos of Sandra and her boyfriend Jason (Jake Miller) that seemed like maybe they were taken from the actors real lives rather than created for the film. Even the traditional introduction blurb explaining the footage's existence was good enough and explains the constraint of D. never appearing properly on camera (due to him releasing his finished piece online). For me I felt both Sandra and Jason had little on-screen chemistry, I found it hard to believe they would ever have been a couple and that couldn't help but remove me for the picture a bit. Also there are multiple scenes of cockroaches being killed, their death throes caught in close up detail on camera. I detest insects for the most part but it still seemed unnecessary suffering just in the interest of making a film.

Basically I didn't really like The Documentary, it's not even due to the miserable subject matter, it is just that unlike others of its type the director is a blank slate, there is never anything he says or does that fleshes him out as a proper person and so I found myself bored, uninterested in both him and his dense victim. The Documentary was released on digital platforms August 22nd thanks to Terror Films in North America, a worldwide release will follow courtesy of iFlix.

Posted by Daniel Simmonds at 05:40