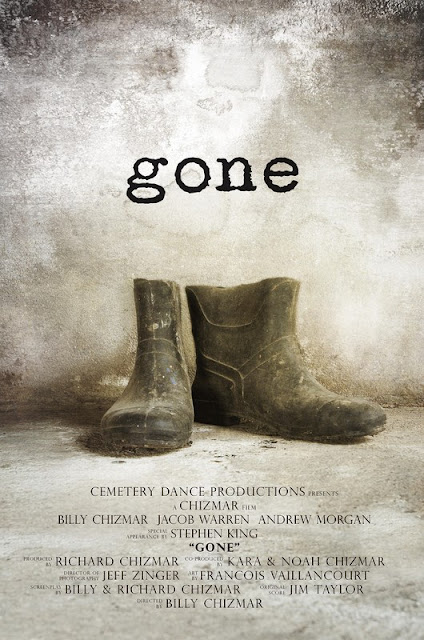 Nowadays I tend to store up horror news rather than do lots of little posts about whatever bits come my way and so once again I have released a valve to unleash a news storm. First up then...Your Flesh, Your Curse had its world premiere at the BUT Film Festival in the Netherlands at the end of August. This is the 5th feature film from 25 year old filmmaker Kasper Juhl, whose previous films include award winning social realistic horror A.G.W.A.U (also known as A God Without a Universe). This latest film is about a woman named Juliet (Marie-Louise Damgaard) who ends up in limbo after being brutally murdered. Here a spiritual guide forces her soul to relive repressed memories. Sounds cool enough and it also features the most prolific actor ever; Kim Sonderholm.

Next up is news of thriller [Cargo] that is trying something daring for a feature film, or least that's what it appears from the trailer. Ron Thompson stars as a businessman who wakes up to discover he has been kidnapped and imprisoned in a cargo container. A call to his phone informs him that he has 24 hours to raise a ridiculous sum of money or else he will die. I got a slight hint of Phone Booth and Cube, though I do wonder how this tale can be sustained for a lengthy time without boredom setting in, still it would be interesting to find out. [Cargo] is currently nearing the end of post-production. The soundtrack is to be released by Invisible Hands Music while a novelisation written by producer J.C Macek III is coming in January 2018 by Bloodhound Books.

In other news Jasmine is coming to VOD/DVD in around a weeks time, it is set in Hong Kong and follows a hapless outsider who is trying to find out who killed his wife a year previously. When I reviewed it I said 'where Jasmine excels is giving us such an interesting character in the form of Leonard. He is a flawed hero and the film never goes away from showing us this'.
In other news zombie slaying video game Killing Floor 2 got a new map in summer in the form of The Tragic Kingdom that takes place at a twisted carnival of terror. Fighting against hundreds of undead in a sinister fairground is really effective, even more so is that the enemies have been re-skinned, so the normal zeds are wearing pig masks,  the smaller ones are now pinheads etc. Maybe the most horror focussed type map yet released, and of course it is free for anyone who owns the game.

The Edmonton Festival of Fear International Film Festival opens on Friday 13th October, it has been announced that Gone shall be getting its world premiere here. This film is special as it features a guest appearance by the master of terror Stephen King. In the movie three friends go on a fishing trip deep in the woods. As they tell scary stories around a camp fire one night bizarre things start happening that leads to the three disappearing into the darkness of the woods.
Bacchanalia is coming to DVD on October 10th in North America and is available for pre-order now. This was originally shot in 2013 under the title The Winedancers (I covered it back in 2014). This is a comedy horror that again features Kim Sonderholm and is about an innocent wine tasting weekend that turns into something very...odd.

And there you have it, another round-up of the latest news that has been thrown my way. I will end by mentioning Steam video game A Robot Named Fight, a game that is stunning, think Super Metroid crossed with a rogue-like. A review shall be coming in the future for that hidden gem.
Posted by Daniel Simmonds at 14:23