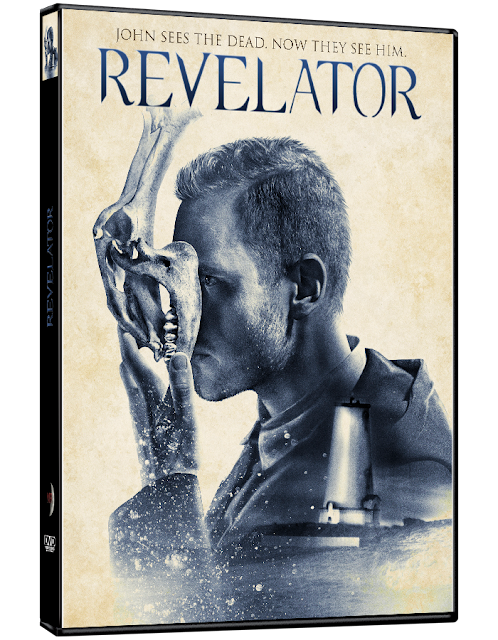 I really really wanted to love Revelator, it has a great sense of style and is engaging with plenty of shady characters, and yet I left the viewing with more a sense of befuddlement and confusion than anything else. It didn't seem that I could really understand what was going on no matter how hard I concentrated, maybe it was due to a long day in my day job draining my mental faculties but the frustration set in at around the halfway mark and I never recovered.

J. Van Auken (who also wrote and directed this) stars as John Dunning; a psychic loner who has the curse of being able to see ghosts where ever anyone has died. A rich former client dies and leaves John in her will an island, one which he believes will give him the peace he so desperately seeks due to no one having ever died on it. However her powerful family want the island for themselves and will stop at nothing to get hold of it, especially the brutish Elias Bellvue (Alex Klein). The head of the family Carmine (Grey Lucey) promises to help John if he investigates how his son was killed, and so teaming up with reporter Valerie Kreuger (Mindy Rae) John sets out to do just that. 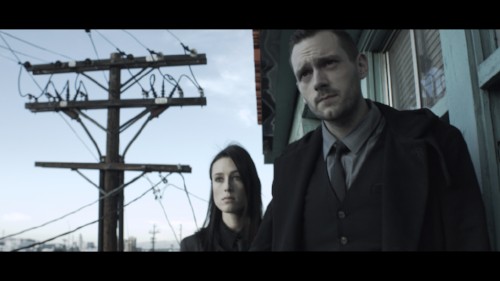 Sometimes totally unrelated films can be grouped together as unofficial sequels, I couldn't shake the feeling here that John in Revelator is actually Miles from We Go On (in that film Miles was cursed with the ability to see dead people). Obviously it is just coincidence that the films bleed into each other a little bit. Both films have similarities to The Sixth Sense, probably the most famous 'I see dead people' style of films, though talking of that style is something that Revelator does have. The ghosts seen here are the most horror based part, each one is frozen in time, mirroring the moment of their death. You get a gun shot victim perpetually standing on the spot silently screaming, a heart attack victim constantly grabbing his heart. There is a creepiness to these figures helped by the slight blurring effect used on them. The genre here is a cross between detective and supernatural with a lot of it leaning on the former, especially when it comes to the rough handed interactions he ends up having with a lot of the cast.

There is a good sense of bleakness to the world of both John and Revelator as a whole. He is an outsider to society, unable to function due to constantly seeing the dead, the characters he interacts with are also outsiders. His character was always a bit weird, having outbursts of anger and always getting bullied by the other cast, even when it comes his time to really shine he drops the ball in an entertaining yet low key finale. You also have the stupidly rich Bellvue family who operate outside the normal rules and act all mysteriously. Elsewhere the reporter is a damaged soul, resorting to drastic methods to ascertain if John is a fraudster or not, and she has chilling stories of her own. In fact a story she tells at around the halfway point about the reason she is afraid of the dark was hands down the most effective and scary part of this movie. This is at it's best when characters are retelling stories, the dialogue is always engaging, though on occasions there did seem to be some slight sound issues where I couldn't quite hear what was being said.

At it's core the film is a simple enough tale, I just got lost on the fringes. A big chunk of the film is John and Valerie at a remote house trying to piece together what exactly the dead son had been trying to build in a secret room there. This answer never really gets answered satisfactorily and turns out to be something of a red herring, though John never seems to get the message about that. There are crosses and double crosses but nothing that took me by surprise, everyone is so miserable and jaded that I never came to really care about anyone. This can be seen in the moderate body count, each death is treated by everyone as an inconvenience rather than a shocking act which began to make me think this is set in an alternate reality where murder is not as big of an issue as in ours. There was an attempt to make things less black and white with it being implied quite a few times that maybe John is mentally ill rather than literally seeing ghosts, but by the time this possibility is seriously explored the film has gone along too much and as a viewer I had seen too much to take that theory seriously.

Revelator is an interesting experience, it has some good performances, and the ghost make-up is great, especially the main one that keeps appearing. However for me I just could not make head or tales of the story and that was off putting which was a genuine shame as this has a great deal of atmosphere to it, and the cinematography throughout was consistently good. If you're a fan of the supernatural investigation genre you will probably get more out of this. Revelator is out today (September 5th) on Amazon, iTunes, Google Play, Vimeo, Xbox, Steam, Vudu and Youtube with the DVD available exclusively on Amazon MOD all thanks to Midnight Releasing.