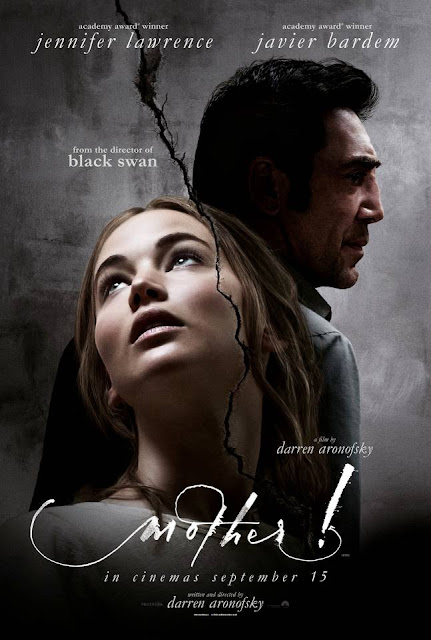 I had heard good things about Mother! so despite knowing literally nothing about it I made an effort to catch one of its last performances at my local cinema. To be honest I kind of wished I hadn't bothered, this was hot trash wrapped up in an artsy bow and while it did plenty of surprising things I was more baffled and confused than being able to enjoy it.

Jennifer Lawrence stars as Mother, the younger wife to Him (Javier Bardem) who is a famous poet struggling with extreme writers block. While he spends his days attempting to write Mother spends the time renovating the family home of his that they both live in. The arrival of a strange man (Ed Harris) brings with him untold hardships and trials which threaten to bring an end to the peace and tranquillity the remote homestead used to offer. You can say I didn't 'get' this film and maybe you are right, yet this was a tough slog to get through, several people left throughout the film and while I don't condone leaving before the end of a movie I couldn't really blame them. This is so deep in symbolism and analogy that the plot becomes extremely bare bones. What starts off simply enough with Mother horrified at the end to her and her husbands peaceful existence then becomes something that plays out like a two hour dream sequence of random nightmare events bringing hell to Mother. Along the way we see extreme violence and murder, we see hero worship, riots, executions and even get to see a newborn baby ripped apart and eaten. If you're looking for some context you will be hard pressed to find some, instead this seems like an attempt to bring famous biblical stories together in an unholy mesh of insanity. You have analogies for the garden of Eden, Jesus Christ, Cain and Able, Revelations and many more, it is all dizzying but not in an enjoyable way. Initially I emphasised with the horror Mother feels at her precious home being invaded by faceless masses, especially as her husband has no problem with all this intrusion, instead it inspires him and so he welcomes it despite Mother's pleas. I myself sometimes suffer social anxiety and so her attempts to find solitude away from the chaos was something I could relate to. Director and writer of this; Darren Aronofsky (Black Swan) has stated that Lawrence represents mother nature, and from that we can infer that the home is symbolic of planet Earth.

The arrival of a second string of people gives Mother! its most intense and dizzying section that exhausted me to witness, In the space of half an hour or so the house becomes symbolic of the world, cults, riots, slavery, and war, all is going on in the house as Mother is bounced around never being able to manage to find a way to escape, each exit being flooded with more people entering. The thing that kept me going was that there had to be some kind of resolution that could perhaps save this movie, make all the madness make sense, but alas when the end comes in a mushroom cloud nothing has really been explained, ending as it does with a plot device seen in countless films before. 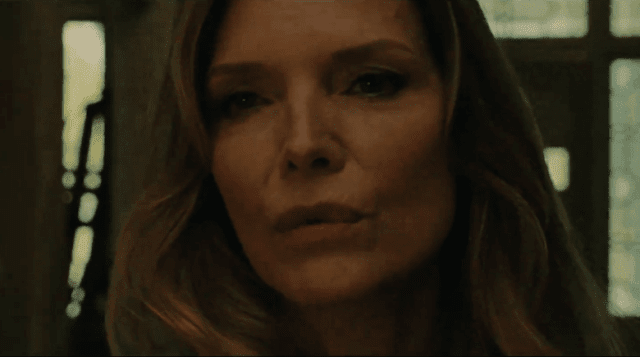 I can't say anything bad about the acting, Lawrence in particular is strong as the main focus, and indeed she is focused on with her appearing in every single scene, the camera sticking to her like the most loving stalker. A lot of the shots follow Lawrence as she journeys around the big house, we only see other people if she is there. The rest of the gigantic cast are mostly mobs of people, many only sharing the odd line or two. Javier, Harris and Michelle Pfeiffer all get some good screen time but with the point of view always on Mother we never get a good grasp of what anyone else really are, except it becomes quite obvious Him is meant to be a representation of God.

Many critics are in love with Mother! and see it as something really special. For me though I didn't understand the point of this at all, I can't see what point Aronofsky was trying to tell in this sometimes pretentious mash-up of humanity. I think if there had been more of a plot maybe it would have been more enjoyable. As it is this is very well made, has some really good acting but really was hard going, I appreciated the spectacle I was getting to witness but that doesn't necessarily mean I have to like it. Mother! is one of the weirdest films I have ever seen but is not an experience I would want to ever go through again, it is something that will stick with you for a while at the very least.