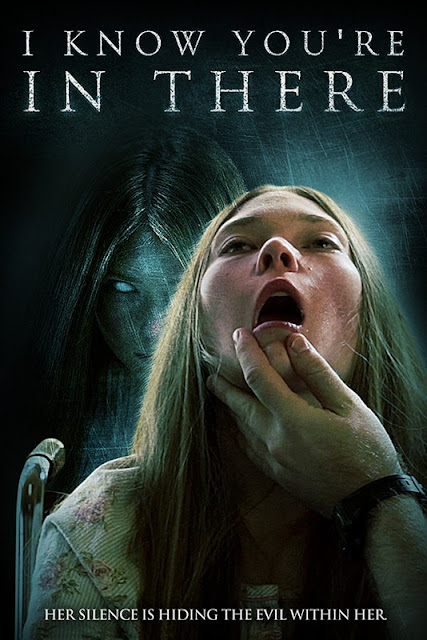 When I first started watching I Know You're in There my heart dropped as once again I found myself face to face with what appeared to be a found footage horror. The start is pretty awful, it felt like no end of bland films from that genre, but thankfully as the film goes on the found footage element gets used less and less, but also importantly in a more and more effective manner.

Tom Redding (Will Hurst) finds out one day that his mother who abandoned him many years ago has committed suicide, and that in her will she had left him her remote and isolated home up in the mountains. It is also revealed to him that he has a catatonic sister who is going to be put in an asylum now their mother isn't around to care for her. Weirdly Tom jumps at the chance to look after his sister Chloe (Grainne McDermott), he thinks it will make a good project for a video he is making for school. So against the advice of Dr. Jorgenson (Mindee de Lacey) Tom heads off to the wilderness with his wheelchair bound sister in tow, and with his girlfriend Jaime (Karin Lee) planning to join them both in a few weeks. Things start off ok but Tom soon begins to suspect that Chloe is faking her catatonic state after a series of bizarre incidents occur, it seems that all work and no play makes Tom a dull boy too... 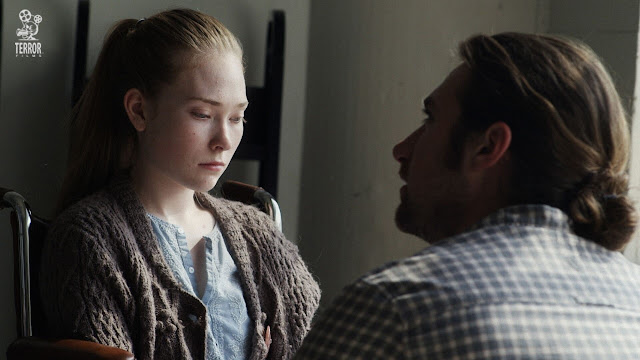 I really liked the idea behind I Know You're in There, I found it original to have a catatonic character be the starting point for horror. With her somehow malevolent stare Chloe is the perfect person to really be creepy. However the way the horror is handled isn't the best in my opinion with some missed opportunities and bad editing fluffing up what could have been really something special. Another aspect that brings this down is that this wants to be The Shining, the second half especially felt like a low budget remake of that, complete with a cabin fever affected Tom walking around holding an axe, his long lank greasy hair stuck to his face and an evil grin on his lips, and a saviour character who travels and travels only to...well if you've seen that Kubrick classic you can probably guess their fate.

It is a shame director and writer Robert Lawson Gordon felt the need to add in a Jack type character turn as up until the change in pace the film felt super effective. I loved the daily video diaries Tom does, and I liked how they get more and more unsettling, my two favourites being one where he is drunk and riding around at night on Chloe's wheelchair with an abnormal camera angle used, and another where the whole diary segment is just him staring into the camera not moving or saying anything. There is a supernatural element at play here, one which is backed up nicely by some early Native American lore about the area the house is located in. It is quite heavily suggested that Chloe may be the conduit for some evil force but I feel it would have worked better without this hint of demonic intervention, having her just be a legitimate psycho who is faking her condition would have been far more chilling, especially with the remote location. 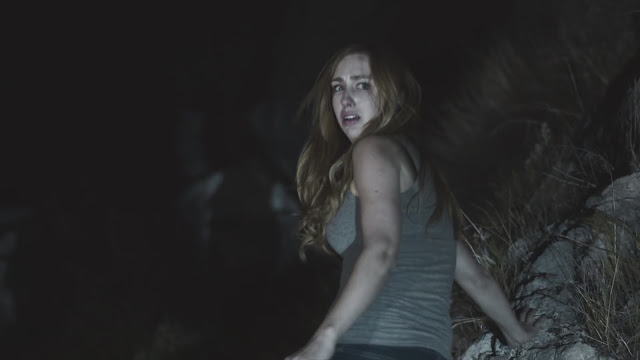 The found footage is used sparingly, but it is also the cause of some frustration for me with terrible use of camera glitches to hide possible movement on the part of Chloe. Personally I would have found it far more scary to suddenly see the permanently still girl suddenly turn to look at the camera or something like that, instead whenever it is suggested she does it is chopped up with the ridiculous camera glitch effect, so for a few frames she will be standing up then a glitch and she will be back where she was in her chair. For someone who doesn't do much McDermott is fantastic in her role, every single scene she's in there is no movement from her, no blinking from her, even when she is slapped, or having food pushed into her mouth she just plays the part fantastically. The very best shot in the whole movie is when Jaime is running from someone and stumbles over, she looks up to see Chloe silently staring down right at her, was awesome!

The second half becomes more about Jaime's struggle to understand what has happened to Tom who by this point is in full on Jack Nicholson mode. At first (with the exception of the truly unbelievable decision he makes to look after his sister at a remote location having just met her literal seconds before) he isn't that bad a person, you feel for him when it first all starts and the weird events occur. However the more he gets contaminated by whatever evil is around the more lame he becomes until where I just couldn't care less about him. The same goes for Jaime, I felt she was too much of a wet blanket with her lines delivered rather meekly when they called for real passion. It is a shame as there is a good degree of atmosphere with the remote house managing to have a tinge of the Overlook Hotel to it. I also adored how the soundtrack was blended into the on screen goings on. The main theme seemed to start with Tom making up a simple and rather ominous tune on a piano he finds, this song he made then becomes the soundtrack and is played repeatedly in many of the best scenes. At another point when a door is being bashed the music then becomes more aggressive with bangs to it too, almost like it is mirroring what is happening. 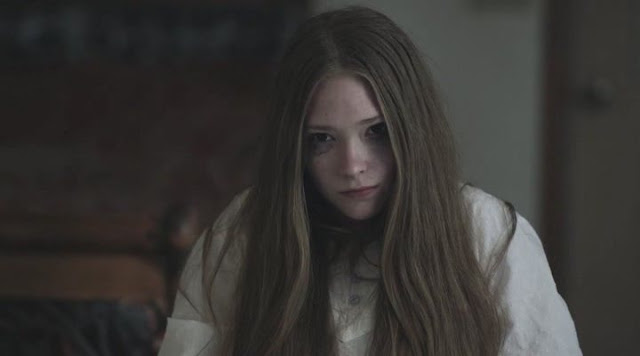 Despite my disappointment at how a lot of I Know You're in There was handled there is a great idea dying to get out. McDermott is very creepy and most the scenes involving her aside from the camera glitch style of editing are effective. The soundtrack, coupled with the isolated environment lead to a great deal of atmosphere, if only this had had the confidence to stand on it's own and not try to be The Shining 2016 edition it could have been something really special (though at least it was better than The Perfect Husband that similarly aped good old Jack). I Know You're in There came out on August 18th across multiple digital platforms in North America thanks to Terror Films, a worldwide digital release is to follow courtesy of iFlix.