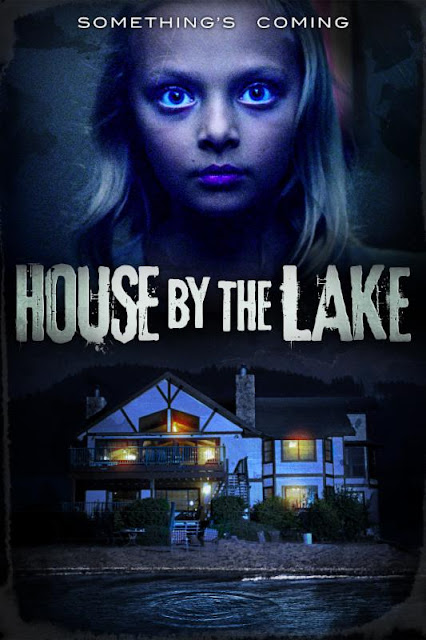 House by the Lake (directed by Adam Gierasch of Night of the Demons) is a horror that tries something a little different in the way it paces its plot. This way didn't really work for me and made the film feel like two distinct chunks, just that one of the chunks was far briefer in time than the other.

Mismatched couple Scott (James Callis from Battlestar Galactica) and his wife Karen (Anne Dudek) have gone on holiday to a lakeside house along with their severely autistic 10 year old daughter Emma (Amiah Miller) and her helper Gwen (Natasha Bassett). Emma starts going on about someone she calls 'the fish man' which her parents assume to be an imaginary friend, however this man may be more real than they think...

Traditionally films have a three act structure, obviously a beginning, middle and end. With House by the Lake this structure didn't seem to be there. Usually in a horror you have the slow build up until around the halfway mark when the proper stuff begins, not so with this. Instead you have a slow gradual build up for over an hour, and then in less than ten minutes the horror begins in earnest. So the majority of this film is a drama and as dramas go it isn't bad. Scott and Karen are about as opposite as people can be, as an outsider the viewer can see how doomed they are. Karen is all about rules and very controlling, while Scott is the polar opposite, they have nearly zero chemistry together with that only appearing when they talk about the distant past, or when they get natural urges. This friction is compounded by Emma's new helper who happens to be a young and quite attractive woman. There are some good scenes with the three, especially when Gwen first appears, so much is shown by body language. I have a soft spot for Callis anyway as I loved him in Battlestar Galactica and here he does a fine job as does Dudek (though there is a really cringe worthy scene of Callis 'playing' a videogame by mashing random buttons on a X-Box 360 controller). This drama is all well and good but it is horror I wanted from this.

With her autism Emma comes across as quite a difficult person, she is near mute and when she does speak she is always extremely hostile to all around her (except for local probable paedophile Harry for some reason). As such it is really hard to care about this kid, she is nothing but a hassle and didn't do much but irritate. She is supposedly in contact with the mysterious fish man she speaks of, yet in no scene do we actually see this early contact. Moments of supposed horror occur at different points, but as these usually equate to people just finding pools of water around the house, they don't achieve any sort of satisfaction. Equally unsatisfying is Emma's late night sleep walking that again is set up to be haunting but doesn't come across as anything interesting at all. 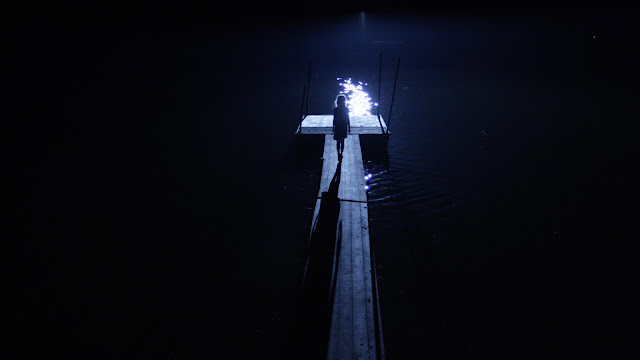 The plot outside of the family issues of two ill suited people trying their best to look after their autistic daughter is pretty bare. Along the way there is quite a large red herring sub plot that occurs and I became to suspect what the 'fish man' really was but this turns out to be ditched in favour of a more different finale. After so much drama and normalcy to then have 8 minutes of insanity felt far too rushed. I wish there had been more exploration of this part, or more hints towards this as over an hour of constant bickering did begin to grate, some unseen foe revealed to be real or not would have benefitted. It felt like this was meant to be a remake of Creature from The Black Lagoon but they almost forgot to include anything but the build up. I don't know if this was done to achieve shock value when horror does eventually occur but it just seemed at odds with the tone of the rest of House by the Lake and didn't fit very well.

If this had been done as a straight drama I feel it would have worked much better. Instead we have great performances by the adult actors but in a plot which builds up to the ridiculous and so destroys the legitimacy of what has come before. Still this is almost worth watching just to see a slightly aged Dr. Gaius Baltar. House by the Lake debuts nationwide on Cable VOD, Digital HD and DVD on October 10th thanks to Random Media.