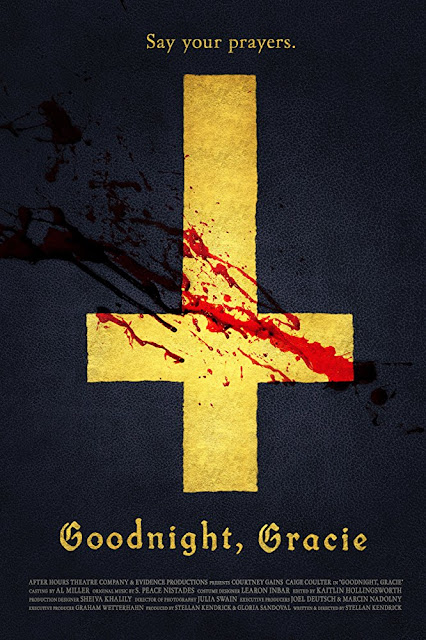 Goodnight, Gracie (written and directed by Stellan Kendrick) may be under 4 minutes in length but it doesn't pull any punches, this is a brutal little film! Rather than build any set-up this opens straight into the horror that only gets more intense until the shock finale. This short was actually created as a proof-of-concept for the crew yet still manages to stand on its own right.

8 year old Gracie (Caige Coulter) is awoken in the middle of the night to sounds of screams. Investigating she discovers her mother being hacked up with an axe by a mad man (Courtney Gains from Children of the Corn) and so decides to combat this evil the only way she knows how.

With the first shot pretty much showing a crucifix coming loose off a wall and swinging upside down I thought this was going to be about demonic possession, that could also be inferred by all the religious imagery. So it makes the change in tone all the more shocking to see a close up of a hacked up body. While Coulter was fine enough it was Gains who stole the show with his manic mannerisms, hypnotic to look at. I loved how they didn't shy away from gore and violence despite having a young child front and centre. This was inspired by the director's real life divorce of his parents and tells quite a bitter message of 'blind faith leads to death'.

Goodnight, Gracie was in the Official Selection at the Sitges 2017 film festival where it had it's world premiere. It is to be the Opening Night film at the San Antonio Horrific Film Festival in Texas on October 20th and will also be shown at the NYC Horror Film Festival on October 29th, with more festival appearances to be announced soon.

Posted by Daniel Simmonds at 03:16