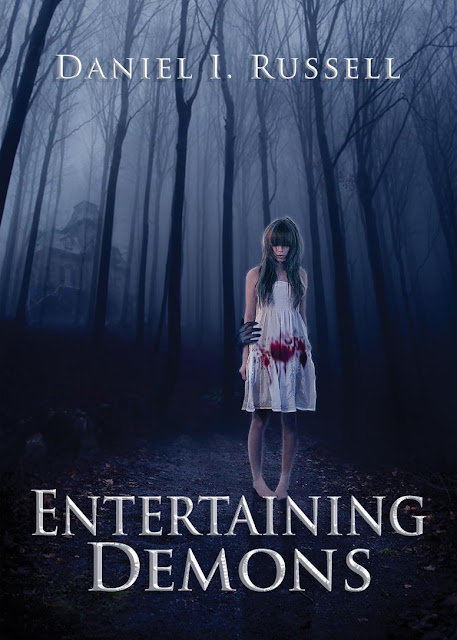 Daniel I. Russell's Entertaining Demons is a horror book that felt a little bit different from others of it's type. In fact a lot of this book feels more like a twisted adventure story in the vein of Neil Gaiman, while the other half is more familiar. It is the meeting up of these two styles that really makes this something unique in feel.

15 year old Molly is the unwitting star of a reality TV show called PI: Paranormal Investigations due to her home being seemingly haunted by a ghost. She is unable to stop being in it though as the show provides the money her and her grandfather need to keep her mentally ill mother in a good nursing home, while she hopes the show's host; paranormal expert Samuel will be able to find a way to stop the hauntings. However things are not what they seem with the spirit haunting the house actually a demon, and worse two more demons are travelling to her sleepy English town with the aim of shutting down the show using whatever means they can...

When I first started reading this I wasn't immediately hooked, I've seen the demonic presence haunting a house so many times in films over the years that it has gotten to be quite a dull subject. It was the introduction of the sub plot involving the two demons that my interest got heightened. I found everything about these two characters to be fascinating. They ride around in the bodies of humans but are able to come out at will, one of them is like a huge shaggy beast, while the other one is made up of snapping teeth on stalks and that can turn its fingers into deadly needles. The descriptions for these two were endlessly descriptive, Russell is fantastic at providing vivid images of these creatures. They are anti-heroes in that they are looking to disrupt the events playing out but are in no way whatsoever good people, these are demons who care absolutely nothing for humanity and this shows in their actions. Much of the really violent stuff happens around these two and much of it is so over the top crazy that aside from a couple of torture scenes it comes across as quite fantastical. There is a lot of descriptions about destroyed and eaten people, and of the aftermath of victims of these two (with a strange focus on sex organs), yet it is always captivating, again in the vivid way it is all described. Around half of the book is focused on these two and Entertaining Demons is all the better for it. These are not the only demons of the book though with the others also receiving enough attention to really make them stick in the mind, whether it be the skull crown wearing demon stalking Molly, or the demon of TV; Audience who was a fantastic creation with some David Cronenberg Videodrome style moments of repulsive organic technology.

The other half of the book then deals with Molly who is set up to be the heroine of the story, yet that becomes questionable, not in her actions, but in the way the focus comes to be away from her, with her character just a pawn (though an essential one) in a much larger story. I felt quite bad for this character as there wasn't the usual path to salvation you would expect, in fact nothing but worse and worse things seem to happen to the poor girl with seemingly every new danger just adding to the list already with her. I guess the more outlandish characters here drowned out hers as she is just a typical teenage girl. I liked the interactions between her and Samuel, and I liked the look into reality TV and how it affects people, such as her friends becoming alienated from her and getting lots of hate in the media. The biggest plot twist for her was dangled in front of the reader for the longest time, yet when it is revealed I couldn't help but feel underwhelmed as it was just so obvious and was something I had confidently guessed at around 100 pages earlier.

In terms of the overall plot I did enjoy what an adventure this was, with multiple antagonists such as the two demons and their loyal human helper, the demon haunting Molly, and Audience there were multiple points where they clashed with each other which was entertaining to read, I liked how these groups would battle each other and I also liked the notion of medallions which meant the demons were unable to touch specific characters. This led to some great moments and inventive situations. For me though I really did not like how this ended, I don't mean the epilogue, that was fun, more the end to the main plot, I thought it was miserable with no justice for the people who really deserved to get their just desserts, left a bad taste in my mouth that somewhat tempered my enthusiasm for Entertaining Demons.

With that ending aside I did enjoy my time with this book, it became more of an addictive read the deeper into it I got. For me it was the demons that were the stars of this, I caught myself thinking I could happily read other stories about these entities, especially with Russell's great descriptions that make these seem real in the minds eye. There are some really thrilling moments to be found here, and some nasty parts, though this is far more action horror based than having firm feet in legitimate horror. Entertaining Demons came out on 25th July thanks to Apex Publications.