Citadale: Gate of Souls was originally released on the Wii-U last year and has now been re-released as part of the Citadale: The Legends Trilogy which funnily enough is made up of three different games. These games are modelled on the classic Castlevania series, so much so that many plot points, level design, and enemy types, as well as the weapon system are virtually copied totally. Nowadays with Konami seemingly refusing to make any more Castlevania games a copy is better than nothing, and thankfully Citadale is a damn fun game.

So there are three games to be found here, each one can only be played once the one before it has been completed. Starting off is Citadale: Gate of Souls. A Dark Lord (who is in no way Dracula) terrorises the land, playing as Sonja Dorleac and wielding the Dark Lord killer 'Shadow Blade' you make your way to his castle to meet up with your husband (who happens to be the Dark Lord's son) in order to seal his Dad away behind the Gate of Souls.
The second game is Citadale: Curse of Darkness, it is 24 years later and with the seal on the Gate of Souls weakening, a wizard (the son of Sonja) has headed to Citadale in order to repair it to full power. After failing to return Sonja's other son Gabriel decides to also make the journey to see what has come of his brother.
Finally you have Citadale: Legacy of Fate, 17 more years have passed and now the wizard's son Christopher makes the fateful journey to the dark castle as evil is once again rising to suffocate the land. 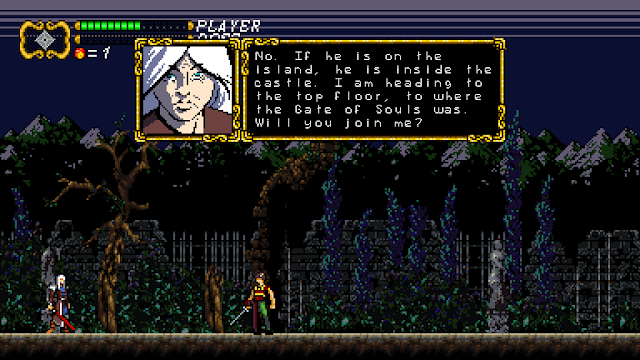 This is a very nostalgic game as it is made to resemble an 8-bit game, like the early Castlevania's were. The graphics are simple but with modern technology there is far more animation to them, while the amazing soundtrack is done in the chiptune style. It is a 2D platformer that has you battling through various locations such as forests, caves, mines and castles with a unique boss at the end of each level. The variation of these bosses is impressive with only one repeating over the 18 levels (a giant eyeball that behaves and looks differently each time). These bosses have simple attack patterns but are fun to fight and range from skeletal demons, giant insects and humanoid foes and they come in all sorts of shapes and sizes. Normal enemies range from zombies to skeletons, ghosts, bats and spiders. There are some that appear to be ripped straight out of Castlevania in the way they look, especially a large knight with a shield, and the final boss for Gate of Souls that not only has a battle that takes place in an identical throne room to Castlevania but the boss is a vampire who teleports around the room and summons bats.

There are modern day concessions made that stops this from being as frustrating as the early Castlevania's could be, you have infinite lives for example, while a warp point opens up once you reach a boss so that you don't have to replay the level again. Also my favourite improvement was that enemies don't constantly respawn, instead once they are dead they are dead. The only issue I sometimes had was if I walk onto a new screen occasionally it would be right into the path of an enemy and I would unavoidably take damage, oh, and also there is no way to save once you are in a game so you have to complete it unless you want to lose your progress (the creator of the game; Ezekiel Rage informed me this has now been rectified in a patch). The game is pretty easy with each game being around 30 minutes in length from start to finish, but it isn't boring, I had a lot of fun playing this due to the smooth gameplay, generous check points, and the great soundtrack, especially in the third game. 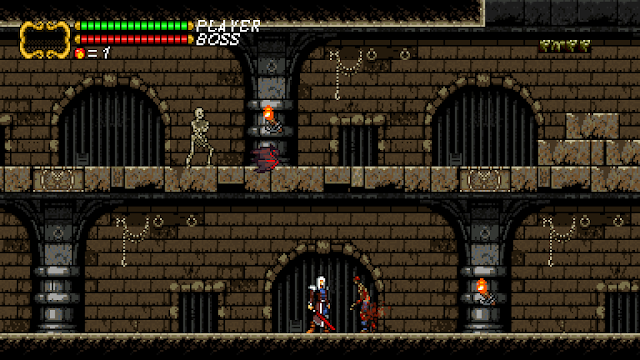 Each of the three games takes place in the same locations (though sometimes they have been aged by time) but with different level design and slightly different approaches to the levels. The first one is the most simple with it being a progression of levels. The second game requires that you kill every enemy in each level before being able to finish it, this has more maze like areas. The final game gives you a map screen and allows you to play through it in any order which was cool. Each of the three characters has a sword as their main weapon and like Castlevania can get special weapons as secondary, such as an axe and holy water.

Citadale is more than a homage to the Castlevania series, it is more like an unofficial reboot with much of the story identical to those. Sometimes with the level and monster design it was very blatant, (each of the endings is literally the hero standing on a cliff as Citadale crumbles into pieces in the background, exactly the same as that other series) though to be fair the creator states he 'has an undying love for NES games'. It may not be the toughest game in the world but it looks, sounds and plays fantastically, while I appreciated the fleshing out of the story with cutscenes (even if personally I thought the artwork for these was awful). I love that games like these are still being made today.

Hi there,
Ezekiel Rage here, creator of the game. Thanks for the nice review.
Please note that I issued an update today that allows for savestates for easier completion of the games. After each chapter is completed, you can also freely select a stage :)

No problem, it's a really cool throw-back. I will amend my review with that information! Keep up the good work.