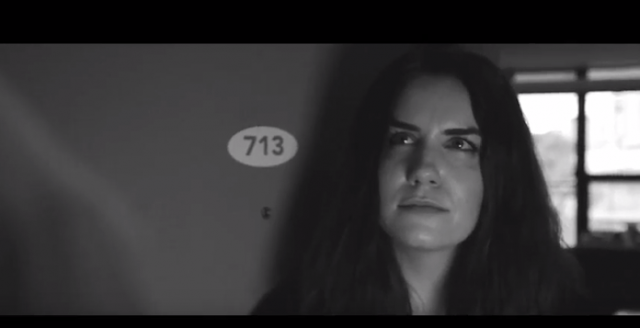 A Walk Home Alone is the second of director Andrew J.D. Robinson's short horror films he sent my way. While Placebo was quite sterile in its portrayal, here we have something that is more familiar and deals with a common subject in six minutes, but does so in a novel way.

There is a serial killer loose in the city and it seems he targets young woman walking home alone and leaves their bodies in the river, this is all told to us from a radio broadcast. We then follow Alice (Maura Stephens) as she makes her way to her flat in an apartment building, and who is quite preoccupied with something and so doesn't notice she is being followed...

A Walk Home Alone is shot in black and white and again features a soundtrack that is once ominous and seemingly at odds with what is happening on screen. What I really enjoyed about this is that the serial killer plot is faded into the background, while it bookends this short it is the sub plot in the middle that becomes the main crux. This also avoids cheap scares and instead builds the tension and horror by what it doesn't show. Robinson tears down the victims defences within this middle story by its sweet resolution and so when the main plot comes back into the forefront she is naturally in a weakened state of mind.

While it is up to Stephens to carry the emotional range it is Jurgen Vollrath as the stranger who stole the show for me. There is just something strange about his character, yet he manages to not comes across as threatening. The boyfriend on Alice's phone for me was the weakest part as there didn't seem much emotion behind the voice, though that could be excused as not knowing the context for why he might sound that way. A Walk Home Alone avoids doing the expected with it's story and by only hinting at what happens is all the better for it. By focussing on the unimportant and leaving the horror in the mind of the viewer rather than displayed on screen this wins out for me.

Posted by Daniel Simmonds at 07:55