The Last of Us: Left Behind (2014) - Zombie Horror Videogame DLC Review (Playstation 4) 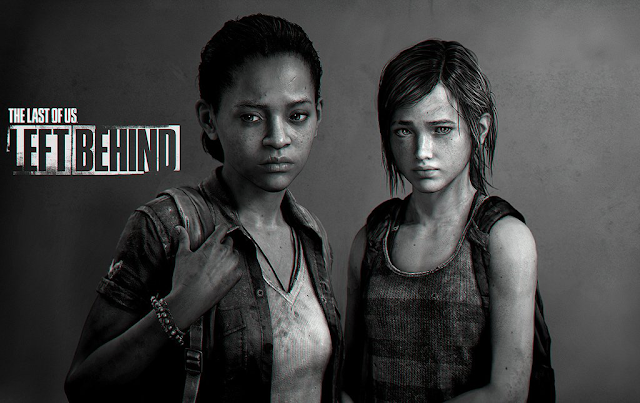 I reviewed the Playstation 3 version of post apocalyptic zombie game The Last of Us back in 2014 and thought it was amazing. Since then I have brought and completed The Last of Us Remastered which is even better, mainly due to the upgraded graphics making a great game look truly stunning, and that the single player expansion; Left Behind was included in the package (the expansion is now also available to buy as a stand alone game). I'm not planning to do a review for the remastered The Last of Us, though I will say if I had reviewed it I would have gave it a 10/10 due to the added inclusion of this.

In Left Behind you play exclusively as teenager Ellie with the game taking place across two different time periods that constantly swap places with each other over the roughly two hour game. The first story takes place midway through the events of The Last of Us after Joel gets impaled on a metal pole with Ellie taking him to an abandoned shopping centre where she sets out to search for medical supplies. The second story takes place a few weeks before the start of the main game and is set in the human safe zone that starts in. Ellie's best friend Riley reappears after vanishing six months previously. Having joined the Fireflies (a rebel group accused of terrorist acts) she wants to spend one last day with her friend before going away and so takes her to a large shopping centre outside of the safe zone to have some fun. However knowing that Ellie starts the main game with a zombie bite on her arm it is safe to assume things probably wont go swimmingly for the duo... 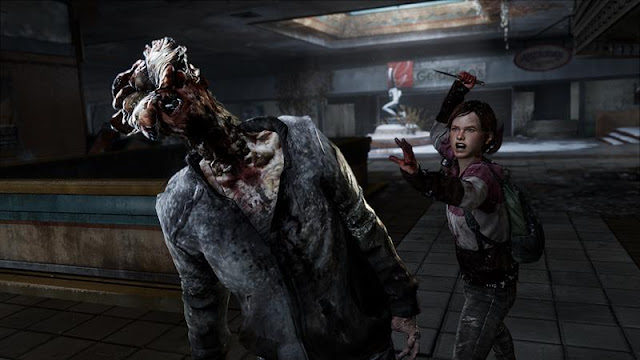 I really don't know why I had been putting off playing Left Behind for so long. I think part of me was worried that it couldn't possibly be as good or as meaningful as Joel and Ellie's adventure due to the short length, and part of me thought maybe it would be a bit boring. How wrong I was though, this is not something you should play if you haven't experienced The Last of Us as it doesn't do a lot of explaining to bring new players up to speed. I was pleased to see it took place over two story-lines, it helped make both these feel constantly engaging as it often leaves a story on a mild cliffhanger. The two halves are mostly split up into different tones also. Ellie on her own looking for supplies is much more traditional with her having to battle both zombies and human enemies. Here she is able to craft items, collect new weapons and do all the things that have been seen before. There was a revelation in the battles as they become three way fights as for the first time as you get to fight both humans and zombies together. It was only afterwards I realised that never actually happens at all in the main game which is really quite odd as it creates such a fun new layer to combat.

The other story is far more focused on, well, story. This Ellie is more naive and inexperienced and is far more about two young girls hanging out doing things teenagers do. Their visit to the shopping centre has plenty of highlights such as a horror shop trip, a water fight, a merry-go-round ride and a photo booth. The photo booth in particular sheds so much light on their lives as they confusingly ask each other what Facebook could have been, while the word 'internet' means literally nothing to them. There are still plenty of emotional parts here, Ellie and Riley's voice actors are both stunning and their close relationship feels natural rather than forced. It leads up to a conclusion that got tears in my eyes in the powerful way that very few other games manage to create. 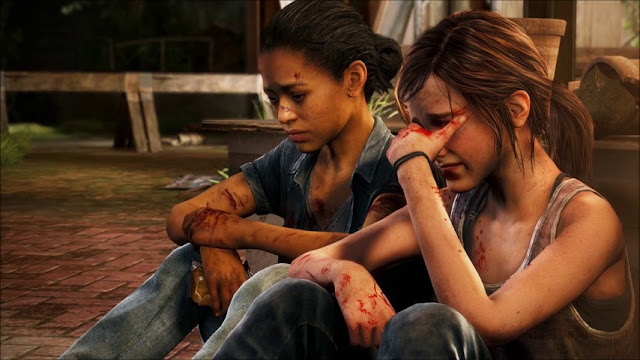 It isn't all perfect, for me the conclusion to the 'search for supplies' story was slightly frustrating, having cleared out a room of enemies (using up all my ammo in the process) I got to my goal only for a huge new group of enemies to arbitrarily make an appearance. The safe zone story on the other hand I felt was pretty much perfect and led to some thrilling chase sequences towards it's end. Also as always the combat was a bit woolly, I always have trouble lining up shots due to how sensitive the aiming is and so many seemingly easy shots went wide due to my sights flying around.

Sometimes DLC feels rushed and adds nothing to the game,  however sometimes it is the perfect compliment and actually injects more life into the existing game such as with Bioshock 2's Minerva's Den and now with The Last of Us: Left Behind.