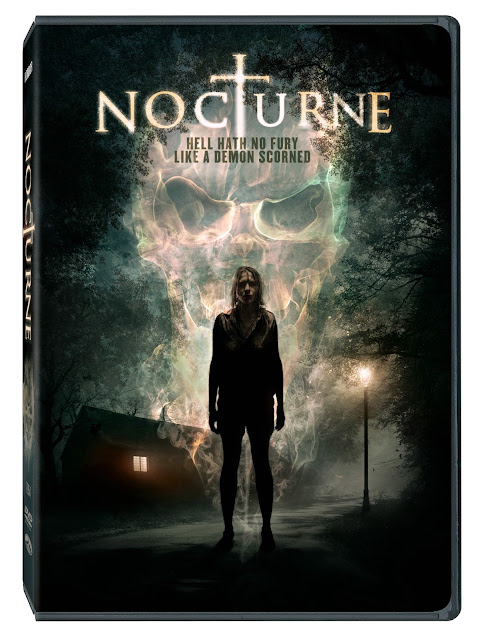 Nocturne is a film that continually impressed me, I went to it with no expectations at all and can happily say this is something you should watch with no forewarning of what it is about. I would go so far as to suggest if you want to watch this movie already then go see it and don't read this review as the less you know the better. This is a damn clever film that just goes to prove you really don't need the biggest budget in the world to make an effective horror.

Timid Jo (Claire Niederpruem) arrives at her friends house to attend a small party to celebrate the end of school. The guests include Vi (Melanie Stone), her boyfriend Isaac, Maren (Hailey Nebeker who looks very much like Lauren Cohan), Liam, and intellectual Gabe (Jake Stormoen). The group decide to perform a seance using a pack of cards and after getting some strangely accurate results decide to go on to other things such as hanging in the Jacuzzi, playing typical drinking games, and strip poker. However as the evening goes on more and more weird things start happening, mostly centring around Maren whose increasingly odd behaviour starts to worry the group. Is everything going on down to the fact their drinks were spiked with LSD or is something far more terrifying unfolding?

As I said in my introduction I went into this with no knowledge whatsoever of what type of horror film this was and for the longest time I suspected the whole thing was a prank on the part of writers Katy Baldwin and Kristi Shimek, as well as director Stephan Shimek. This is down to the fact that Nocturne is filmed very much like a horror with a fittingly ominous sound track and yet for a good two thirds of the movie nothing much like horror really occurs. There are a few things for sure but instead there is just a nasty vibe going on, there is the sense that something is not quite right but no evidence to back that up. This had similarities to me with Troy Escamilla's Party Night in that the group of friends are soon to go their separate ways and their unity starts to fragment gradually throughout this. Before anything happens we get shown that Gabe is a secret pervert, that there is a suggestion Vi isn't actually in love with her boyfriend, and throughout it is obvious that something bad is happening with Jo, from the constant text messages she is getting, to her timid nature and her not wanting anyone to see her body.

However with half an hour left the simmering tension boils over and utter craziness unfolds with many people meeting their unfortunate demises in a variety of crazy ways. Nocturne is extremely clever with how it frames a variety of its scenes. At several points you have Maren perfectly aping what other characters are saying as they talk, it's impressive how those scenes play out as well as create a real chill as it is just off kilter and bizarre. Then you have the scenes that unfold multiple times but from different characters perspectives. By the end the house the group are in has become a bit disjointed from time, one fantastic scene has a character in the kitchen questioning Maren, but then later the same scene is shown but with a different character talking to her and you realise her answers to the questions work in both contexts, just so clever. This also happens with how events play out, something as innocuous as firing a gun into the ground is later shown to have dramatic consequences. A series of unrelated events are shown to later all have covertly led up to a traumatic point, Gabe secretly filming the girls getting changed in the bathroom is the start of a chain that leaves someone dead, again it impressed me no end how darn clever Nocturne is.

At first I thought the characters were all a bit generic and there is some truth in that. They all come across as typical movie teens; sex obsessed and just wanting to get drunk, yet there is an undercurrent of darkness that is led by Gabe whose magic tricks and knowledge of Satanic card meanings is the vanguard to future events. The character of Gabe felt the most unrealistic to me, I have never encountered someone like him in the real world and I don't think people like him actually do exist, yet in the context of a horror film he works as this is escapism, it isn't meant to be realistic in what it portrays. The actors all give good performances, Niederpruem and Nebeker stand out in particular, I thought both those characters were very interesting. With Jo it was nice to see a main lead who wasn't your typical strong willed hero, with Maren you had a very interesting antagonist who managed to do so much when her role a lot of the time just has her standing still looking faintly amused. There was a great horror moment that is identical to one from Children of the Corn 666: Isaac's Return but was effective, and there are some bloody and violent death sequences. The budget did make the scenes that had characters burning look a bit CGI heavy which was a shame though it has to be said, they removed me slightly from the scenes they were in.

Nocturne is set in a small and bland house, features stereotypical teens, and has no outlandish looking scenes, yet it is one of the best horror films I have seen this year with excellent use of muted colours, a great soundtrack and nifty use of editing. The writing for this is masterful and while it did remind me of everything from Lost Highway and The Cube to Book of Shadows: Blair Witch 2 it was unified so well and made a whole that was so enjoyable.  Nocturne was released July 25th on DVD in America thanks to Monarch Home Entertainment.