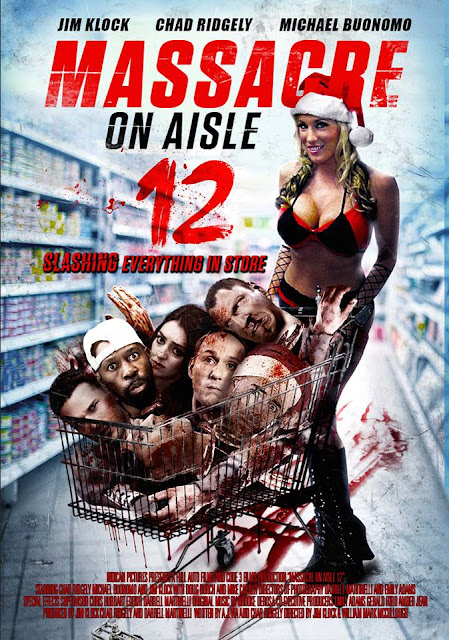 Indican Pictures's Massacre on Aisle 12 is a horror comedy set entirely in a hardware store during one night of mayhem. Sometimes a film doesn't have to be good to still be enjoyable, and a decent bit of escapism from daily life, this is one such example. The humour nearly always fell flat, character motivations were schizophrenic and the main plot is bare bones yet I found myself getting into the crazy world despite the obstacles put in the way.

It is Christmas eve and Dave (Michael Buonomo) arrives at a large hardware store for his first day at his new job where he is introduced to the eclectic staff by assistant manager Jack (Chad Ridgely). These staff include a PTSD suffering janitor Otto (Jim Klock who also directs this), bitchy till operator Tara, camp manager Mr Kipper, and drug expert Pharms amongst other strange people. Everything is going as bizarre as usual until the discovery of a dead body and a duffel bag full of cash leads to the group dividing over whether to keep the money for themselves or if they should call the police. It is not long before everyone starts fighting amongst themselves on who gets the money and soon the body count starts to rise... 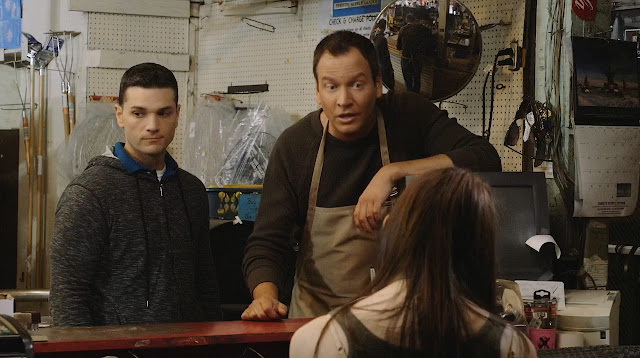 One of the things Massacre on Aisle 12 gets right is how coherent the various 'kerazy' characters are here, all of them, even including main character straight man Dave have moments where they act pretty insanely. As everyone is over the top rather than just one or two people this zany acting works as no one stands out. I got a feeling of Chuck Palahniuk's Haunted in the way the trapped people start imploding, the store becomes it's own little version of Hell with alliances constantly being built and destroyed over the 1 hour 20 minute run time. However it is this self same switching up that also caused the most problems for me.

The characters are just all so damn inconsistent in their stated beliefs and actions, a good example is Black Jack (Aikido Burgess) who is the strongest member of the 'call the police' side and yet at some point switches to also wanting the money with no event or explanation given for his sudden change of heart. At some point all the people who said they didn't want the money suddenly become involved in a race for the cash which aside from making a few different scenarios (such as one person hiding in the vents with the money) just comes across as jarring. Even Dave slips between different characters, at one point wanting to escape the building by any means, another time joining the hunt for the money, at times cowardly and at times very aggressive this inconsistency just means you can never really get to know a character as they all act like lunatics and seemingly change personality between scenes. They are a varied bunch though and I enjoyed some ways their one dimensional character types were fleshed out, such as the flashbacks to each of the staff's initial job interviews. It was also neat including in the ending title cards for each of the characters with a little blurb saying what had happened to them. 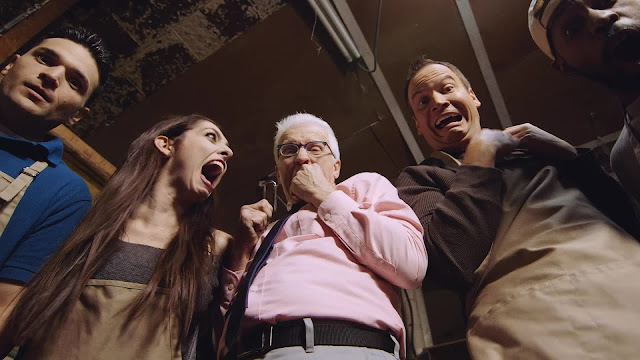 A lot of the humour here relies on stereotypes, none more so for Black Jack who is the butt of all the many casually racist jokes with other people making assumptions about him constantly because of his skin colour. Homophobic jokes also appear with Mr Kipper with many innuendos coming from a huge amount of his lines and an implied rape scene, and then there is the poor treatment of women. Both the female characters are portrayed in a negative light, Santa's Helper Barbie spends her whole screen time wearing lingerie, while Tara is shown to sleep with anyone at the drop of a hat. There are also a lot of jokes that come from the cast reciting lines from other movies, the biggest miss being one about not being afraid about no ghosts and another character responding about why he would be afraid of goats...hilarious. However this stupid low brow humour is again consistent, I did enjoy a few of the lame puns Dave makes about the fate of other people and I thought a part where Mr Kipper apologies for what he just said by blaming spellcheck to be pretty amusing.

Special effects sometimes look pretty fun, there are some good deaths such being crushed by a lift, and a wooden statue right through the torso,  but there are also a few underwhelming ones such as an electrocution. The plot is simple enough to get by with but I did feel by the halfway point the story had dried up with a sequence of events that keep happening for no real reason then something had to happen to fill the running time. For me it was the sketchy personalities of the cast that put me off the most, I wish people had stayed true to their selves and not constantly switched motivations.
Regardless of my issues with Massacre on Aisle 12 it was as I said a good bit of escapism, I loved the general idea of the story, the location and some parts of the humour even if it didn't all fit together that neatly. This was a weird one to review as I didn't feel it was great yet I did enjoy my time with it. I feel this would have been a great choice to watch at a film festival as a rowdy crowd would be the perfect audience.

Posted by Daniel Simmonds at 09:55

thanks dude. I wrote this movie 20 years ago. The filmmakers destroyed any semblance of "comedy" with their awful racial, sexist, homophobic and misogynistic innuendo and "writing". And Chad completely rewrote my final draft, and then cut me out of the picture entirely until I had to pay to watch it myself. An awful experience all around. I'll always have my version, in my mind, at least, to enjoy.

Thanks for the comment, that is a shame that your idea got taken away from you, must of been demoralizing. I'm sure it's a small consolation, but is still good that you are able to have to yourself the real, undiluted vision of what this ideally should have been.