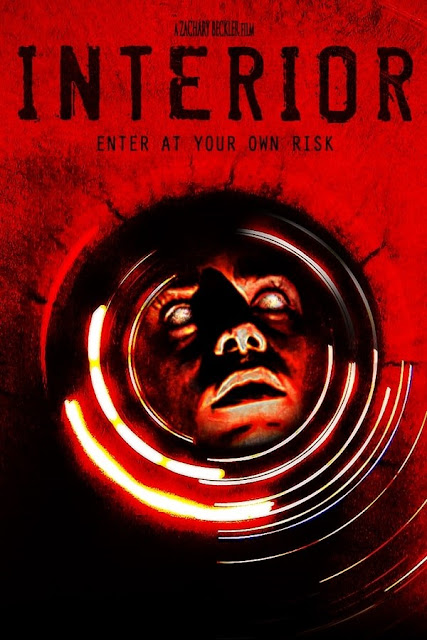 For such a simple film haunted house movie Interior achieves a lot despite following quite a well travelled road in terms of what happens. It also impresses in how for the majority of the run time it is a one man show and yet rarely gets boring, helped in no small part by main lead Christopher Carullo whose likable nature means he entertains throughout. This is Zachary Beckler's first full length film as director so it is a great first effort (he also wrote this and features as a Pizza delivery guy bit-part character).

Filmmaker Sam (Carullo) is hired by an old film school buddy friend Allison (Piper Rae Patterson) to spend the night in her house as she believes the property is haunted by a ghost, one that her daughter Danyl has named Emily. The original plan is for them to set up cameras around the place and spend the night together monitoring them, but jealousy from her husband Drake about the fact her and Sam used to date leads to Sam staying the night alone. Initially sceptical, Sam soon comes to suspect there may be something to the story after all and as the night progresses he experiences more and more terrifying incidents...

This is a good film that is hampered by a bit of a frustrating finale, a case of the ball being dropped at the last moment. In theory this is very similar to Paranormal Activity or any such modern home haunting horror. This benefits by being shot as a traditional film for the most part, there are cameras dotted around the house, and at lots of points Sam walks around using a camera to record footage. This does indeed go to the found footage style at times, but that is only a small aspect of what is here. Technology is key with a variety of digital cameras, laptops and sound recorders being used in abundance, a lot of the horror at least in the first half of the movie is shown via these objects of technology. 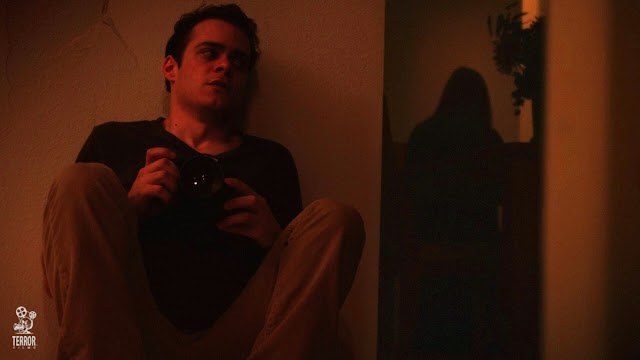 Carullo brings a lot of humour to his role, one guy on his own shouldn't be as entertaining as Sam is here. He is obviously bored for a lot of the night, there are mini montages of him mucking around, rooting through the families belongings, and setting up pretend ghost appearances. He is aware there is a ghost due to drawers opening on their own and objects moving around yet his frustration at never being able to catch one of these moments on film was quite funny with several small montages of the same stuff happening time and time again and him getting increasingly irritated by the petty actions of the ghost. Another memorable part was when he desperately posts to Facebook saying he's trapped in the bathroom with a ghost outside and needs help to which the only reply is a couple of 'likes' to his post, it all works towards relieving tension without suffocating the horror moments. Sam isn't some strong movie lead, he comes across as an every man, reacting at many points as a normal person would, such as he ordering a pizza just so he can have some company for a bit due to being pretty scared. For me I would have sprinted out that house after not even half of what he experienced, the only real motivation for him not doing that is that he states at one point that he really needs the money Allison is going to give him for staying the night. It is good that he works so well in the role as a good 90% of the film it is just him on screen. This is broken up with the effective use of Allison phoning him now and again, mostly to give exposition via a letter she discovered in the house from the previous tenant when she first moved in.

The special effects are ok and don't really detract from the scares too much. The digital effects are good but of the ghost itself it looked like someone wearing a black costume rather than a paranormal being, to be honest I was reminded of monster costumes in British odd-ball comedy show The Mighty Boosh. On more than one occasion I felt maybe the whole situation was a set up from the family to prank him due to how the ghost didn't look like a ghost but was actually just down to a real world limited budget. It still worked to generate chills though as even with a rough looking ghost it was super creepy with quite a few moments that had the hairs on the back of my neck standing up, and of course plenty of  jump scares. An issue comes that early on Sam is looking on YouTube for ghost sightings and one of the videos he watches is that generic one of a quiet video ending in loud screeching and a monster bursting onto screen (there are limitless variations online, sure you must have seen one of them). That was all well and good but I began to realise that is pretty much what Interior itself is doing, just on a much larger scale. The ghost often bursts onto screen coupled with loud screeching and screaming and while effective is the same trick Sam scoffs at. There are some effective moments, I loved the bit when he looks outside and sees three figures standing in the road staring at him, and the numerous times a figure standing still in a dark room is glimpsed never failed to chill my bones.

Interior was entertaining and compelling up to the finale which to be honest lost me. It goes down an art-house style sequence of weird camera angles, strange noises and slow shots and culminates in a very long 2001: A Space Odyssey style spinning circle effect that was unsettling but did last too long and did confuse me somewhat. by the time we get back to Sam I was a bit lost as to who was who and with the ending not long after I was left unable to get over that strange blip in the movie. This is a fun haunted house movie that had a nice and natural element of humour to it, and a great and sustained feeling of isolated dread, I just wish the last quarter had been different as it was a bit jarring compared to the rest of the film. The award winning Interior is now out in North America on most Video-on-demand platforms thanks to Terror Films, this is to be followed by a worldwide digital release on iFlix.