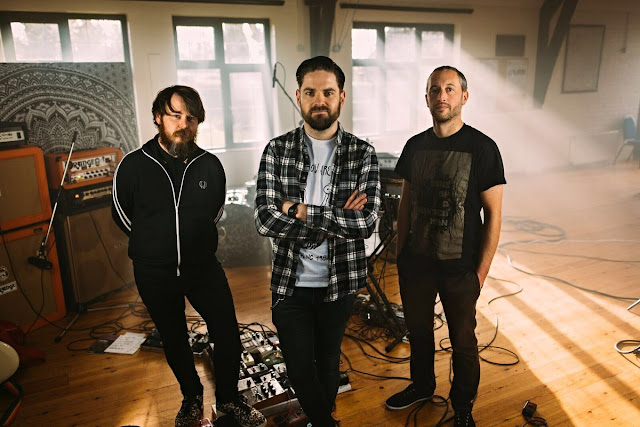 Following on from my horror film double bill news extravaganza yesterday is one that focuses on the musical side of terror. I tend to avoid writing too much about music as to be honest I really don't have much knowledge when it comes to tunes. I like what I like and a lot of that tends to be 90's Brit-pop and early 2000's rock music.

First up then progressive, sludge, horror synth outfit Upcdownc have got a new album coming out 22nd September titled I' Awake. This is the bands first album as a three piece. The band state horror is one constant theme throughout I, Awake with the group influenced by composers such as Fabio Frizzi and John Carpenter alongside the Shogun Assassin soundtrack. This influence led to the use of synthesizers which is never a bad thing in my opinion. The concept for this new album is based on the idea of sleep, dreams, nightmares and fears coupled with extreme anxiety and night terrors. Looming Part 2 is the first track to be shared from I, Awake with guitarist Chris Garth saying: "This song is part of the segment after you awake from a nightmare/dream and still have that feeling of anxiety/terror where you still are unsure whether what happened in the dream was real or not". You can listen to that track yourself here, while included below is a live session of the band playing a cool sounding song.

Next up is the new music video from CA based metal band The Digital Masquerade's full length LP Digital Train Time Machine. The video is for track Straight Jacket and is a neat sounding ditty about being in a mental asylum with an appropriately themed music video that was filmed in Glendale CA at an old abandoned police facility. This was the bands first music video they have done and was directed and edited by Society 1 front-man Matt Zane.