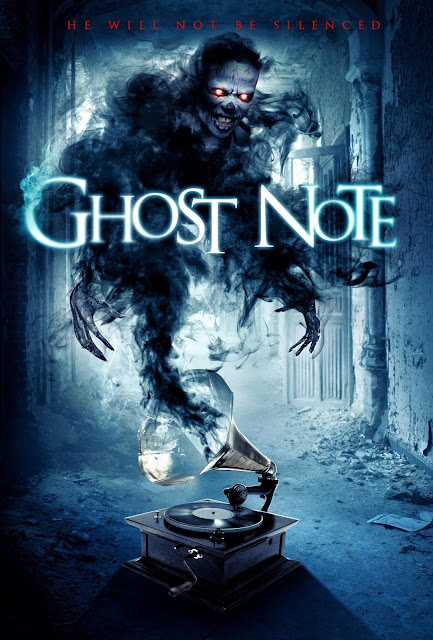 Finally today I have gotten back on track after a few weeks of pretty much only doing my own posts. I put this down to a double whammy of my day job being super busy (which equals overtime and tiredness) and a family wedding I attended last weekend. So director and writer Troy Hart's award winning Ghost Note on paper sounds good, I like the idea behind it, yet it falters when it comes to some quite bizarre story beats.

Teenager Mallory (Alicia Underwood) is left with her grandma (Allyn Carrell) at her large house in the country while her parents go on holiday. In the attic she discovers a strange guitar that turns out to have once belonged to an infamous blues guitarist; Eugene (Kenny Gardner) who went missing decades back and who it is rumoured had sold his soul to the devil in exchange for his musical skills. Now Mallory has accidentally awakened the immortal spirit of Eugene and he is using both the guitar and the only record he ever made as a means to possess people in order to free his entombed body...

I love the idea of the blues musician selling his soul at the crossroads in exchange for fame and fortune, it has been done effectively in a range of media over the years such as Supernatural. Here it didn't seem to be as well implemented. The idea is that the devil possessed Eugene's guitar and Eugene himself rather than grant him musical power. The film starts with a flashback showing how he came to be defeated decades back but you never get to see what he had been like before he sold his soul and so it was hard to like this typical bad guy too much as he is never seems anything other than a monster. He looks the part with his head encased in metal, and his hands bound in steel boxes but he doesn't really do much outside of stumbling around like Jason Vorhees or Michael Myers, though it is a nice touch that he has the power to possess people and make them kill themselves by playing his guitar. There are some nice flashbacks to show the effect his music had on people and that part really reminded me of both Music Store Massacre and Screen.

I felt the film took a bit of a long time to get going in the way it sets up future events. We have a long introduction that includes a family gathering that seems to exist only to tell the audience Mallory's grandad was a troubled man and to set up the utterly pointless subplot of some of her family becoming possessed in scenes that not only had no bearing on the main plot but felt like they were from a completely different film. The middle is when Ghost Note is at it's best, especially the scenes that took place in the local record shop, these added some nice history to the character of Eugene. It is the end where things go a little bit off kilter again and this is mainly due to some silly plot points that bothered me watching this. The guitar and record are both indestructible and it was for that reason they still exist in the house. However they were there to stop anyone finding them and awakening Eugene, yet they were hidden pathetically, the guitar was just under a few boxes in the attic, while the record was just left in a barrel metres away from where his body lay entombed. As these are both the first things he sets out to find should he be ever free it made no sense they were not only not that well hidden but also very close to him. Personally I would have encased them in cement, buried them in a super deep hole, or chucked them in the middle of the ocean all at the absolute opposite end of the world to where I had left the body!

My other problem I had was with the actors. Individually the actors are all mostly fine, the child actors were not great but you always have to give them leeway due to their ages. I liked Mallory fine enough even if she seemed a little naive, her love interest Rodney (Justin Duncan) was also fine in his own way, it's just whenever characters got together they had zero on screen chemistry together, it felt like they were all doing their own little performances even when they were talking together. The only one to actually seem like a real person was Lawrence (Martin Ezelle) but his screen time consisted of only a few minutes sadly, he was a great character. This comes to a head during a weird mid film song Rodney sings about Mallory, complete with a montage of their interactions during the film up to that point. I think it must have been purposeful that him and her seemed like such a terrible match as all their interactions came across as awkward and stilted.

Despite all my complaints Ghost Note was ok, it was mostly filmed well and I enjoyed the slight arthouse style quick editing that occurred whenever a character touched the cursed guitar, and I did enjoy the flashback sequences. The look of the antagonist was also well realised, though I wish there had been more of him using his guitar as a tool for mayhem rather than lots of him slowly walking around randomly killing people (nearly always with them getting killed just out of camera shot, or with the killing blow being missed by a scene change). The film is cohesive and I loved the devil at the crossroad idea it just never flowed that well due to lack of unity with the characters. Ghost Note is available from today (August 1st) on Amazon, iTunes, Google Play, Vimeo, Xbox, Steam, Vudu and YouTube. The DVD is available exclusively from Amazon MOD and this is all thanks to Midnight Releasing. Check out the trailer below.

This movie sucks. The effects are so party store dumpster after Halloween. What is with that stupid metal mask. It doesn't fit the tone of the movie. It looks like something from a bad Rob Zombie movie.

Heh, I can see what your saying, or like a lost ghost design from 13 Ghosts