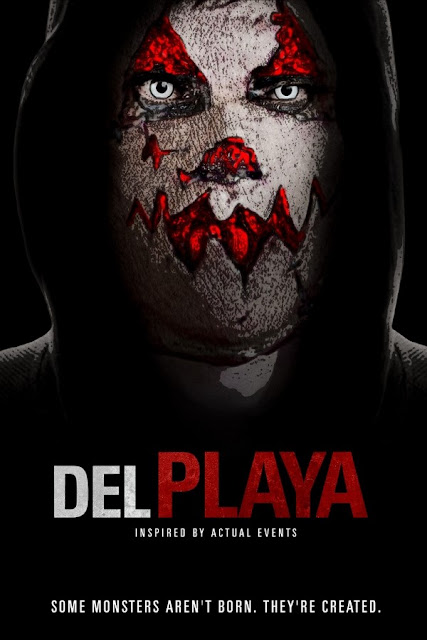 Even before slasher film Del Playa was released it gained a lot of controversy. This was due to the fact that it apparently shared many similarities with the real life 2014 Isla Vista killings (in which an American student went on a killing spree near the campus of University of California). It turns out there was some truth to these similarities though writer/director Shaun Hart said his film is not specifically based on that tragic event but more a response to all the school killings that keep on happening. The film was actually shot at Isla Vista, and interestingly enough Hart lived on the street where the killer's rampage eventually ended. For me the similarities were for something far different, for this shares a lot in common with John Carpenter's classic Halloween series (and the remakes).

Del Playa starts in high school where loner Matthew is obsessed with Claire (Devon Barnes). His obsession comes to a head when during a Halloween party at the school he gets in a fight with Claire's boyfriend and ends up killing him. Five years later and Claire is now at university and is quite the mess. With Halloween looming she has began a descent into self destruction with drugs, alcohol and cheating on her boyfriend all in an attempt to gain control of her PTSD. This would be bad enough but to make matters worse Matthew (Brett Johnson) has returned and he is determined to claim Claire for his own, killing any who would get in his way... 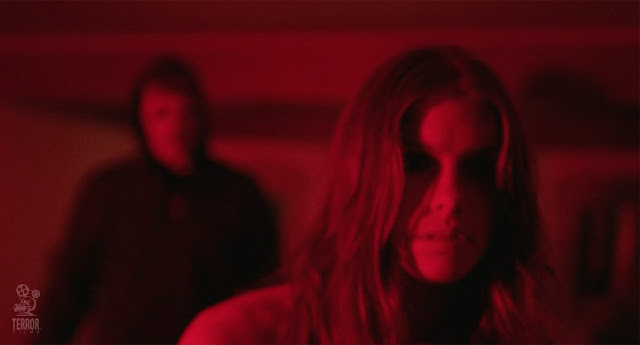 This is to my eyes heavily based on Halloween, and this is no bad thing. Michael Myers is my favourite movie bad guy of all time and Johnson does a great impression of him, though with some novel twists thrown in. Johnson is huge, silent (mostly) wears a hoodie, and a creepy clown mask and so looks the part. He has some great death scenes with a lot of inventive and fun kills to his name. These range from a stake through someones neck to my personal favourite when he drops a full beer keg on someones head! He is quite a physical character and flings at least a couple of his victims about, and he has the very best shot in the film where he launches himself through a plate glass window at a girl with the scene in silence but with music playing over it The brief prologue that takes place during the school days help to shed some light on his upbringing with an abusive step dad, bullied at school, and the pent up aggression he has boiling inside him. All of that reminded me of Rob Zombie's Halloween, while Claire being such a mess couldn't help but make me think of Scout Taylor-Compton in the second one. Plus there is the really obvious fact that both films take place during Halloween.

Del Playa isn't without it's faults and it sucks that they are pretty consistent, yet I could look past them as I just loved how stylish and well shot most of this was. Claire lives in a sorority house and she looks very similar to a few of her housemates that made me get quite confused during a beach scene in which I mistook two different girls for her (in my defence it was set at night!). The biggest issue I had was to do with the sound. The actual soundtrack is fantastic, I really liked it and was fitting for both the attractive dance montage scenes that looked like they were right out of a music video, and the slow motion abruptly edited chase scenes. However I had problems with the audio on a few occasions and the sound effects used. There were two key scenes were characters are whispering quietly amongst themselves, I really struggled to hear what the actors were saying which was frustrating because these were both important scenes. The sound effects on the other hand all sounded ridiculously loud, especially when people get punched. Lastly it comes down to some plot decisions, as always in slashers it comes down to the final girl being chased by the psycho killer, yet here on two occasions she runs though streets packed with people and makes no attempt to ask them for assistance, while the killer is obviously stalking her yet no one seems to notice at all. Then later on when she comes face to face with Matthew suddenly she is wearing her Halloween costume from school and he is wearing a tuxedo. Now this is obviously used as a call back to what happened at school five years back yet it came out of nowhere and was just a giant distraction to what was unfolding on screen. 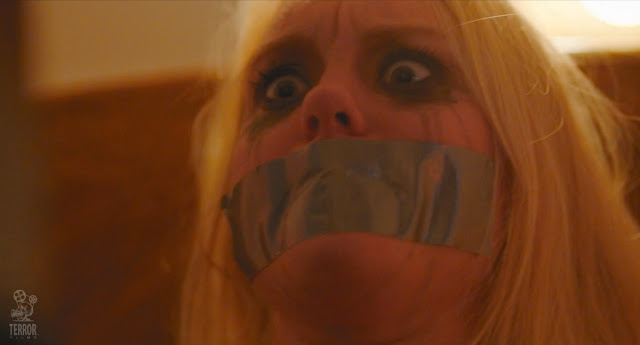 Plot wise this is mostly typical slasher fare with a list of horny college students getting killed off without putting up much of a fight while the final girl is oblivious to it all. I liked the twist that the killer is in love with his victim, it added a nice angle to his obsessive insanity. I also loved the whole psychological aspect with Claire's analysis of him (she is studying psychology at uni), coming to the conclusion that everyone has the ability within themselves to become an animal under the right circumstances. It was a bit of a shame that aside from a few other characters no one has much to them, I certainly couldn't care less about most the faceless victims that Matthew kills.

I have a soft spot for messed up main leads and so I enjoyed the impulsive destruction Claire exhibits, I also felt Matthew was an effective psycho, I really liked the old school brute that Johnson displayed, with that little bit of humanity thrown in when you least expect it. While the sound effects were too loud the visuals were all decent, the kills look great, and at times almost wince inducing. Del Playa is flawed in places but to me it is a diamond in the rough, I really enjoyed watching it truth be told. Del Playa came to a whole host of digital platforms on Friday 21st July across North America thanks to Terror Films while Automatic Entertainment will begin introducing the film to foreign buyers at the AFM this November. Check out the trailer below.

Posted by Daniel Simmonds at 12:32