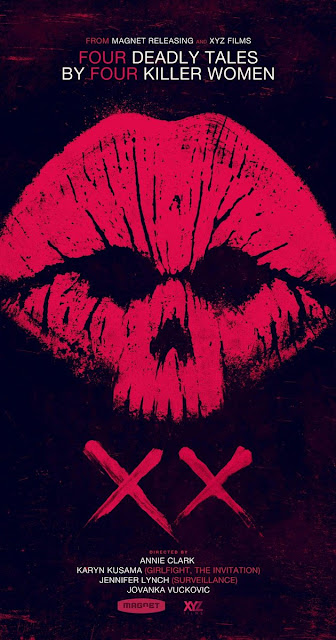 I have a real soft spot for anthology films, I have said that many times before, and I'm sure I will many times in the future. The way I see it is that having a variety of short films means there is more chance there will be one you like, whereas watching a feature length that you can't stand is never pleasurable. So while Empire State of the Dead's linking theme were zombies, The Dark Tapes were found footage, and Holidays were...well holidays, with XX the linking concept is that each of the four films not only features a female in the lead role, but also that all four were directed by women. It was funny I was only saying the other day that Blood Hunters felt different due to a woman directing it, only for four more horror pieces to appear around the corner.

To be honest none of these four shorts are what I would class as essential viewing, each has problems of its own that gets in the way of making them amazing, yet neither are any of them completely without merit. Things start off with The Box that was directed by Jovanka Vuckovic, who also adapted Jack Ketchum's story into a screen play. Susan Jacobs (Natalie Brown) is on the train home after having taken her two children; Danny and Jenny to New York in the run up to Christmas when Danny notices a strange man holding a brightly decorated box. The boy asks the stranger if it is a gift and if he can take a look inside to which the man obliges. From this moment onward Danny changes, refusing to eat any food at all, eventually passing on this strange curse to the other family members. I loved the idea of the mystery of the box and what could have possibly been inside it, and I don't even mind too much that the viewer is never shown the contents, yet it is the Susan that I had issues with. There was a weird lack of emotion to her character, even as her children get seriously ill around her I never got the impression she actually cared too much, this become more of an issue as the short went on and really ate into my enjoyment.

The second segment is titled The Birthday Party (directed and co-written by Annie Clark), this is the weirdest of the lot having a very off kilter surreal vibe to it. In this one it is Mary's daughters birthday and while preparing for the perfect party she discovers her husband dead in his office. Not wanting this to get in the way she seeks to cover this up while guests are all around. The issue I had with this one is just why Mary (Melanie Lynskey) was trying so hard to get rid of the body, it's not like she killed him or anything, it was suggested by comments other characters make that she had OCD, so perhaps her desire for perfection caused her bizarre reaction. Looking past that big hurdle and this one was probably my favourite, the whole final scene is just perfection with a wonderful mix of music set to children arriving at the party, while Mary sits there looking destroyed, darkly comedic. This was all very weird, reminded me a bit of Jam, but I admit I laughed out loud when the final stinger happened.

The third short Don't Fall is the biggest in scope in that it feels like a feature length film squashed down into under twenty minutes. This one was directed and written by Roxanne Benjamin (who also co-wrote The Birthday Party and was a producer on the V/H/S films), it sees four friends on a camping trip out in the American wilderness. One of the friends; scaredy cat Gretchin (Breeda Wool) gets infected from a creepy mural the group find painted on a wall, something that has huge ramifications for the entire group later that day.  The monster effects for this one were really effective, it is the most horror focused out of the lot and I could easily see this one working as a full film, even if it would be pretty generic. There were some strong horror moments here, while the outdoors setting set itself apart from the rest that all took place in or around a house. 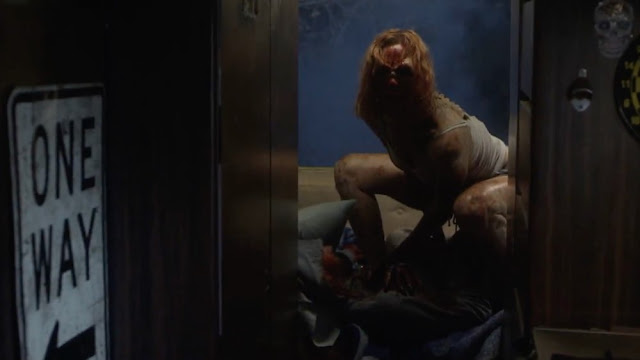 Final film is Her Only Living Son that was directed and written by Karyn Kusama (Jennifer's Body, The Invitation). This was heavily based on Rosemary's Baby and was created as an unofficial follow up to that film. Cora (Christina Kirk) stars as the single mother of Andy who is approaching his 18th birthday. As the day approaches the boys real father comes to claim him. This was the longest of the four films and reminded me quite a bit of The Omen (I'm sure it would have reminded me of Rosemary's Baby had I ever seen it). My problem with this one is that there wasn't really much horror in it, I felt sorry for Cora who was loosing touch with her delinquent son, but she was also a bit pathetic in the way she let him walk all over her. I found the finale of this also to be a bit underwhelming.

These four films are all entwined with an unrelated but kind of unsettling stop motion animation that follows a doll's house with a china dolls face as it walks around an abandoned house, it didn't really go anywhere but it looked cool. So the four films all have their problems but I didn't mind any of them due to the short length (XX is eighty minutes in total). Three of the four all covered similar issues with a mother being the main character so it felt fresh, and slightly jarring to have the third film be from the perspective of a young woman, though I liked the break. XX is currently on Netflix so if you like anthologies then give it a look.