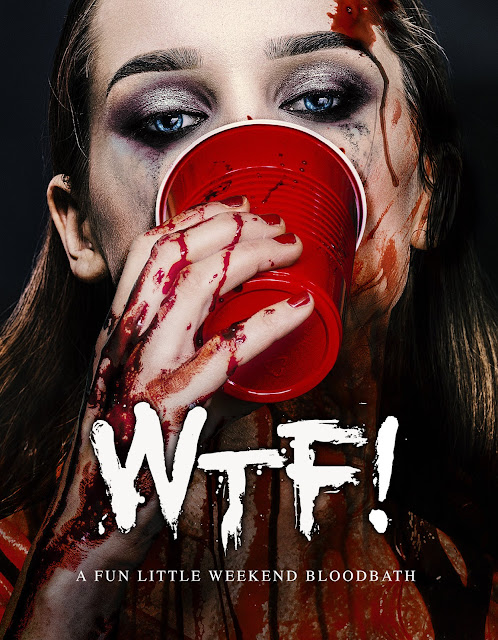 WTF! fits itself firmly into the slasher genre and has a decent dose of comedy to mix. It impresses on some fronts such as the special effects for the many kills, as well as the set-up, but it also fails in some important places also, namely in making the big twist far, far too obvious and by giving us a forgettable looking slasher villain.

Three years ago Rachel (Callie Ott) was the only survivor of a killing spree at a party that saw the deaths of all her friends. Now with a new group of friends that includes her jock boyfriend Sam, stoner Jacob, Bevan, Bonnie and Lisa, as well as her quiet brother Toby she hopes to conquer her fears about that night by heading to a remote house for spring break to party. However as the flash forward to an interrogation room shows history repeats itself and Rachel again finds herself seemingly the only survivor of another killing spree...

While I certainly had my issues with WTF! it was displayed nicely with a great 3D intro credit sequence, and a neat end credits that played over comic book style art work. The design of this film was usually pretty consistent, as was a lot of the directing, though personally the weird slow-mo that is put over the last few moments of any of the victims I could have done without. I thought the very first sequence was a cool introduction to the tone of the movie with a victim from the first killings running out the house shouting the full version of the film's title, and I loved the spliced in interrogation scenes that reminded me of Book of Shadows: Blair Witch 2 (always controversially my favourite horror film of all time). As for the twist it really could have been handled better though. There are really two different twists linked together but from literally the first moment I had the opportunity to decipher them I did. I wouldn't have minded too much but I just couldn't work out if it was intentionally meant to be really obvious or not. Other films have used the same one to much better affect as this led to some bizarre moments where character interactions didn't feel realistic. Also having a flashback montage to add weight to this twist at the films conclusion just wasn't needed, I do feel like I am going on a bit much about that one element of WTF! but I really feel it could have been better handled.

On to the characters and we have a vapid lot of air heads and b*tches. Rachel's boyfriend treats her like trash and is early on shown to be cheating on her, meanwhile the boys are all sex obsessed stoners and constantly being the biggest type of 'bros' they can be and the girls are all really stuck up. Rachel is no better though in the way she just takes all the abuse of her supposed friends and I couldn't see how her and Sam ever got together in the first place as they are polar opposites. I did enjoy the messed up friendship the group all had though, I have had a similar group of friends in the past; the type where no one really likes each other that well and are just united by fate for a time. WTF! is also aware these are not good people with a police officer in one the future scenes saying something along the lines of how awful they all are. The many sex jokes grow tiresome but that is the type of humour the group tend to go for, and there is one fantastic line when Jacob condemns someone by saying "Dante didn't even explore the parts (of Hell) your going to!".

The death sequences here are both fun and inventive with no two the same, there is a penis cut off (really is the fashion nowadays in horrors, seems every other one has a severing moment), a fun looking flame to the face effect, and an axe embedded in a back. Elsewhere there is a wince inducing nail through a foot, and some bloody blunt object attacks. This is mostly carried out by a slasher who dresses down, just a figure wearing a dark hoodie rather than any iconic type of look. Not the most effective look but I can't really say anything as for my A-Level Media Studies course many years back a fake trailer for a slasher film I made featured a slasher similarly adorned.

I would be lying if I said I didn't enjoy WTF! it was dumb and mindless with characters I couldn't care less about, but it did have some nice special effects and a feeling of quality to it. For me the biggest complaint was how the plot was handled, it felt like an opportunity was lost a little bit, while later on the film devolved into characters constantly splitting up for the weakest of reasons. There are worse ways to spend 80 minutes just don't expect the world. WTF! is being released on all major VOD platforms August 1st 2017 thanks to Midnight Releasing, check out the trailer below.