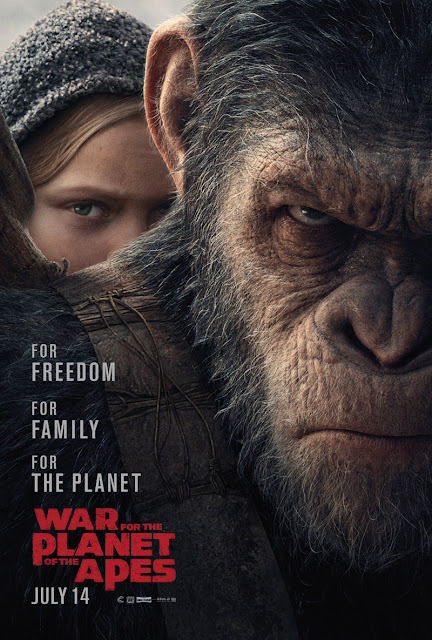 For reasons completely unknown to me I decided against giving a review for the previous film in this series; Dawn of the Planet of the Apes. I often review post apocalyptic films on this blog so it's strange I didn't in that case, maybe it was because I didn't really enjoy it that much, I felt it was far too bleak and lacking any sense of light. Yet with regards to the series as a whole it was actually much more viable than Rise of the Planet of the Apes that I did review here and was neither horror or post apocalyptic. Spoilers for the previous films obviously to be found here.

In the universe of the films a deadly disease has wiped out most of humanity, the survivors try to survive as best as they can. The same disease also had a strange effect on apes, it made them much more intelligent and they are fast becoming the dominant species. During the brief enslavement of a human colony by rogue ape Koba in Dawn a message was sent out to the remnants of the U.S army requesting aid. They sent a battalion of soldiers down that was led by a man known only as 'The Colonel' (Woody Harrelson) and over a few years these soldiers have battled the apes and attempted to locate the stronghold of their leader; Caesar (Andy Serkis). War starts with them finally discovering this place and the Colonel killing Caesar's wife and oldest child. Full of rage and wanting revenge Caesar sends his people to find a new home to live in while he sets out to find the Colonel... 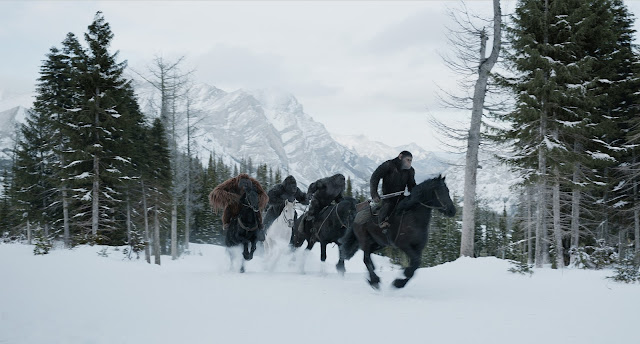 This is such a better film than Dawn, I was so relieved to discover this fact as I was hesitant in seeing this as didn't want another two hours of abject misery. This is better for several reasons. Firstly the ape vs ape battle of the second film never sat right with me, having a human antagonist was so much more preferable, especially with the Colonel. This has very much been influenced by Heart of Darkness with this bad guy replacing Kurtz. He was sent out by the army to kill the apes but over the years his methods got more and more barbaric as he slowly went insane. Now he rules his own little empire with captured apes playing the part of the savages from the book. Harrelson was great as this character, there is a feeling of unsettling insanity to him as he is crazy, yet he does not see himself this way, he thinks his actions have been justified and are needed in the cruel world everyone now exists. A lot of the dynamic of the film comes from his interactions with Caesar, he is both respectful of his foe and determined to break him. Obviously it could just as easily be said the Colonel is based off Marlon Brando's character in Apocalypse Now (especially as some graffiti that shows up reads 'Ape-ocalypse Now'.

While there were moments of levity in the previous film they seemed to be only there to make the bad things that occur hurt all the more. Usually I don't like comedy characters but the introduction of one here was a real highlight. Steve Zahn plays Bad Ape who is a clumsy and stupid chimp who is found on Caesar's journey. He was just so funny constantly with the things he does, even the fact he wears a dorky anorak. Case in point when he is looking through a pair of binoculars and he exclaims in horror that everyone has shrunk and then it is pointed out to him he was holding them the wrong way around. It's all very silly but is always a needed bit of downtime from the serious main plot. Having been with Caesar for three films now I have really come to like his character, he is just as awesome here though looks much more aged than previously, and suffering PTSD about his battle with Koba was a nice touch as it leads him to constantly question if he is turning into the sort of ape he was. Where before his voice was stilted and gruff now he pretty much speaks normally, despite this there isn't that much dialogue at all with the majority of the apes communicating very animal noises and sign language. This leads to long stretches when there is nothing but the visuals to watch which was pretty cool as this film looks pretty stunning. The ape CGI just gets better and better, especially with the eyes, I never got tired and watching this creatures move about, to compliment the great look a variety of weather types such as rain and snow are used to great effect. 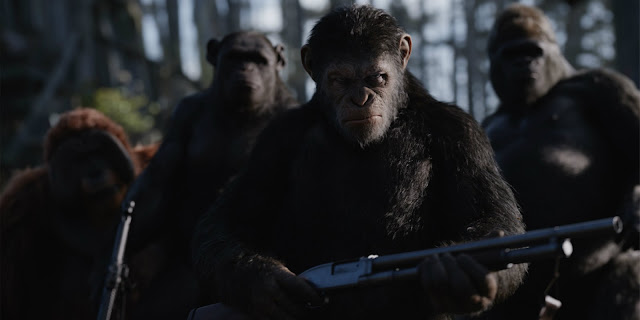 I went into this expecting a similar story to Dawn, instead it seemed to be going down a path of revenge, then again it changes to more of a battle of wills between two characters. It all leads to a thrilling finale that was full to the brim of awesome looking special effects with explosions galore and plenty of fighting. This led to some stupid moments such as a prolonged ape massacre scene that seemed to be occurring only because a group of apes were randomly running around in circles rather than taking cover between a huge rock formation next to them. There was also a few leaps in belief required such as when Caesar, another chimp, a gorilla, and a chimpanzee are watching a human encampment from afar, then skips to the next scene to show them having somehow amazingly stealthed their way into the middle of the camp without being seen! This again happens later when a small human girl they have befriended stealths her way into the centre of a fortified base purely by walking in a straight line and somehow not being seen by the soldiers out on lookout!

In terms of the plot I am impressed how determined the creators are that this is canon within the story of the original The Planet of the Apes films. Here we have a new form of the disease turning humans mute and more primitive such as they were in those films, while it seems the new home the apes have set out to get to is actually where the original film took place. I also liked how they dealt with the left over story from Dawn, how the apes that had followed Koba now purposely work with the humans to bring down Caesar. The film ends on a note that I took to mean this was the end of the new films, apparently though a fourth film has already been announced so would be interesting to see where it goes next. By injecting just a slight bit of humour into the mix a lot more enjoyment was gained, this coupled with fantastic special effects, a great soundtrack, and some good performances led to a decent enough spin on the post apocalypse tale.