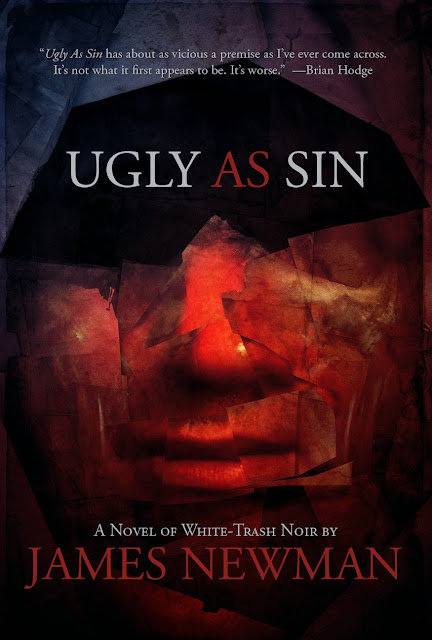 At the start of the month I reviewed James Newman's horror novel The Wicked which was a throwback to horror of the 1980's. I thought it was very well written if a bit similar to other books I had read, guess that was the point though being a homage. I went into Ugly As Sin expecting another similar style of book, instead this isn't even horror, it has a lot in common with pulpy crime novels though with a unique twist in the form of the main character.

Nick Bullman was a wrestling superstar however one day he is kidnapped by two crazed fans who think his in ring persona of The Widowmaker was actually real and so set about torturing him. By the time he is rescued they have cut off his face and unfortunately for Nick in the confusion of his rescue it goes missing. Now Nick lives a life in shadows, with a hideously disfigured face and financially ruined (after assaulting his previous boss over his plans for Nick's new look) he just tries to get on with his life as best he can. A phone call from his estranged daughter leads him to travelling back to his home town where he discovers not only had his daughter had a child who was now in her teens, but the child has been abducted. Nick decides he is going to track down whoever took the girl and make them suffer the only way he knows how...

I loved Ugly As Sin, just like The Wicked this is very well written and has an addictive quality to it. I really liked the character of Nick, not only in that he is a real tough guy, but also that he is a man who has set out to make amends for his previous life. Being disfigured has taught him humility but it actually works out well in his new quest. He comes across as a Frankenstein's monster (see, I'm tying this into horror!) and uses his look to intimidate witnesses and suspects he comes across. I was reminded me of the classic Phillip Marlowe detective novels, something that Newman must be aware of as at one point Nick says: "...Real life isn't black-and-white. I'm no Phillip Marlowe. And I'm surrounded by rejects from Deliverance instead of double-crossing dames with perfect gams and tits out to here." That kind of sums this up nicely; Phillip Marlowe crossed with rednecks and despite the objections things proceed at a pretty similar pace with Nick being seeked out by the people he is hunting. I liked a lot of the characters here in terms of how they are, the antagonists were interesting, his daughter wasn't bad, while the comedy sidekick he gets in the form of super fan Leon added some lightness to Nick's personality.

I don't know if it is a trademark of Newman but I found Ugly As Sin ran into exactly the same problem I had with his other book I read, namely how neatly and quickly the finale gets tied up. I expected a crazed battle with lots of our heroes trademark wrestling moves, instead it is all over within a couple of pages then a flash forward to several weeks later. Throughout the book there are a couple of pretty cool fight scenes, ones where Nick actually does get to use moves he has learned over the years. There is a nice humanity to him though, he is past his prime and issues such as his bad knee constantly stop him from seeming like an unstoppable machine. The plot is pretty simple but it fits together very well, I found it moved along at a logical pace and never made itself too dense.

While it would be hard to recommend Ugly As Sin as a horror book it was a damn entertaining read that was a smooth ride. If your in the mood for a detective novel with a unique wrestling angle then check this out, it's not bad at all. Ugly As Sin has been re-released thanks to Apex Publications.

Nice post, I always look for online reviews as they make my life easy to make decision on what I should buy and what I should not. Thank you for sharing this review, it looks good, I am surely going to read this out

Been horror fan since as long as I can remember. I have been running meetings and clubs for more books and movies review! It serves good!