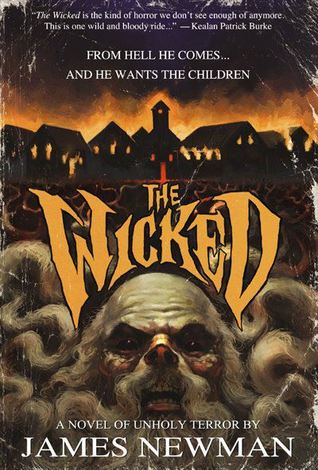 The more I read horror novels the more I realise I haven't actually read many at all, with the exception of the zombie genre that is. For me stuff feels fresh and new when I sometimes wonder if that is just due to my limited knowledge of general horror books. The Wicked is a novel that was written by author James Newman as a throwback to the style of horror being written in the 1980's. It is about a small town being taken over by evil forces and as such drew heavy comparisons to Day Rusk's Barkerton I read earlier in the year, the similarities are so close at times that in my head I started linking it unofficially to that one.

David Little, his pregnant wife Kate and their young daughter Becca move from New York to the quiet town of Morganville to start over after a tragic incident Kate endured. The small town had never been the same since six months previously when a childrens home was burnt down killing sixty people and in the weeks following the Littles arrival things start to get worse. An ancient demonic evil known as Moloch is insidiously corrupting the minds of the town folk, at first the most vulnerable fall under his spell but as his power increases the number of people that can stand up to him reduce, these few include David, the local sheriff, and an ex-marine called George...

So yes, as I stated earlier I didn't even know 'evil taking over a small town' was even a horror genre but apparently it is. Despite having read a very similar book earlier on in the year this one felt different in that what happens here would have been the first third of Barkerton as that then went into a further exploration of what a doomed town would feel like to exist in. Here we get the rise of the big bad; Moloch, from a series of seemingly random incidents all the way up to a finale that was insane in it's scope. I really liked the way Moloch featured here, he resembles an old man with an impossibly long beard full of insects and was really gross to me, but also memorable. Newman was inventive in the interactions people had with this ancient being, from him invading their dreams to Freddy Kruger style appearing from within a bathtub. He has some sort of sexual magnetism to him that led to quite a few descriptively sick moments such as descriptions of a mass, grim orgy to a car crash victim getting pleasure when in reality he is sat there dying from his severe wounds.

With the characters in general there were only a few who stood out as cool characters to me. Main lead David had a subplot involving who the father of his wife's unborn child actually was. This sub plot was the crux for his families move to Morganville in the first place but petered out after a specific part of the novel, I fully expected this to twist into something different but it was all but forgotten after that. I didn't like Kate, I found her extreme religion to be very off putting, even going as far as to chiding David for swearing constantly I couldn't really stand her. Next door neighbour George was my favourite character, there was a nice mix between him being capable and his old age affecting him that made him seem vulnerable. On the bad guys side I really thought the drunk man wearing the Santa costume constantly stood out, I liked how he was a reoccurring thorn that always got defeated but came back later on. His first outburst when he is legitimately being a mall Santa was a memorable part of the book.

The plot while nothing special (this is a throw back after all) had some good moments to it, I especially liked the descriptions constantly going back to Moloch's beard. In terms of the horror this fell into the weird horror trap of using insects and sex to gross out rather than scare. I really don't like insects much so the appearance early on of demonic bee type creatures, and a room completely full of flies (that causes an old woman to have a fatal heart attack) just made me feel queasy. I also felt that the finale while exciting did feel like a big problem got solved pretty easily and without much planning leading up to a mostly positive ending that was a little bit too neat for my liking.

Regardless of the strong similarities to other books of it's type I did enjoy my time with The Wicked, it is well written and helped along by a interesting and despicable antagonist who nonetheless remains elusive as to his actual goals. The three act structure resonated well with me while odd sub-plot aside there was nothing here that felt out of place. The Wicked has been re-released this year thanks to Apex Publications so check it out if it sounds appealing.