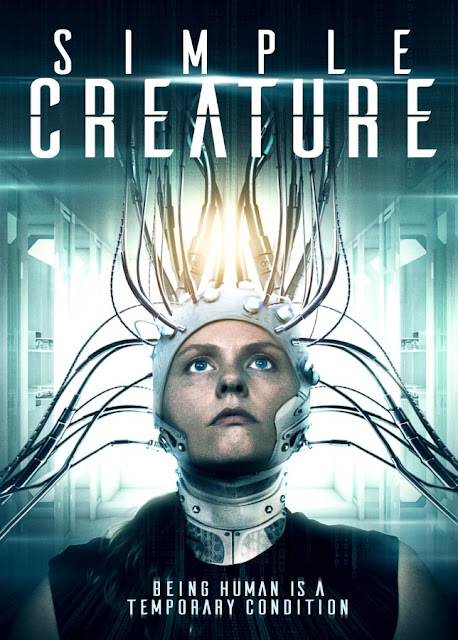 Simple Creature is director/writer Andrew Finnigan's modern day retelling of Mary Shelley's Frankenstein. Though I was worried this would be too literal a re-telling it instead carves its own path using the classic story as a loose template. It also melds modern technology with the mythos, so for example we have the 'monster' being made up of stolen body parts replaced with synthetic ones being used, and enhanced abilities the result of nanobots.

Em (Carollani Sandberg) is a student studying out in the country where she meets farm boy Seth (D'Angelo Midili) and soon they get together. On the way home to visit her father one holiday the bus she is on gets in a crash and she seemingly dies. However her Dad happened to be working on a human enhancement program at shady scientific research lab Singularity and chooses her as his next subject. Over two years she is enhanced with artificial organs and computer software but her desire to leave the facility, coupled with her lost memories returning sees her escape to reunite with Seth. However Singularity are not finished with her and will stop at nothing to retrieve their experiment.

Simple Creature shares a hell of a lot in common with Arnold Schwarzenegger flick Maggie. Both deal with what is normally an action packed genre and slow it right down, both feature a female lead who is having to come to terms with her changing state, and both are set in mournful and sad feeling worlds. Like that also this can be a bit slow at times as it focuses more on character than on events. Em is far more human than the monster of the book. She is struggling to understand just what she is, but she shows emotion, she can talk and operate in the normal world without standing out. Due to the way the film is edited I wasn't entirely sure if she even died before being recreated. It has a weird habit of skipping key events and then insinuating they happened by a series of edited in disparate scenes. So when the crash happens she is suddenly alive and well after a small montage of Seth visiting her maybe dead body in hospital, and of her father and his work colleagues discussing how they are going to retrieve her for their lab. Later on when she escapes (not a spoiler as it happens relatively early on) it skips from her being pretty much a prisoner to her having escaped without showing much of how that happened. This also occurs for the almost frustrating ending that skips from what I thought was going to be a big moment to the near future and then cuts to credit before any explanation is provided.

The plot is divided into different segments, some of which seem to serve as red herrings. Aside from the Em plot line you have the one of Seth and it looking like his family farm is going to be repossessed. Then you have Seth and his uncle Phillip (Russell Hodgkinson from Z Nation!). Phillip is the head of a nearly cult like group of religious farmers who blame Singularity for all their problems. It builds up the idea that he is planning to do something terrible after several arguments between him and Seth, and clues turning up later that suggest a dark future but then this story line is just cut off. Meanwhile you have Singularity themselves who turn more and more into cartoon villains as Simple Creature progresses, acting bad because they are the main antagonist, not because of any justification I could see. The movie has a habit of building up expectations before quashing them, such as the notion this would turn into a revenge thriller.

I really thought the acting was consistently believable, Em doesn't have too much to her character but I loved Midili's performance, and it was good to see Hodgkinson in a more understated role.  Many of the characters are cursory and don't really do a lot but fit the roles well. I wouldn't call this as much a horror as a dramatic thriller, there are few scenes of action, or even of characters doing anything but talking to each other. I expected scenes of Em going crazy on people but this virtually doesn't happen. I understand that wasn't the vibe that was went for her but felt like a bit of a missed opportunity. Instead there are many discussions around God with both sides comparing their actions to religion. Phillip sees the work at Singularity as demonic in nature, while they think it is up to them to take over from God and mould humanity into the next stage of evolution.

Simple Creature is a decent enough spin on the classic Frankenstein story yet I can't help but feel people may feel a little bit let down by the vision shown here. If your after a slow but well acted drama piece about just what it is to be human then you wont leave too disappointed, but the frequent teases of future events that then don't pan out left me feeling slightly frustrated. Simple Creature is coming to DVD and VOD July 25th across North America thanks to Indican Pictures, check out the trailer below.

This movie was a waste of time I don't know what whoever wrote this review is smoking ... -1 star.

The problem with having seen as many horrors as I have is that there have been some soul destroying rubbish that haunts me to this day and so I find it hard to justify giving films the lower scores if they don't scar me and give me nightmares for all the wrong reasons (for instance 'Ghoul School'). This just about got a 6 rather than a 5 as I class 5 as tediously average and for me while this wasn't fantastic I wasn't bored watching it at least, even if it never reached it's potential.