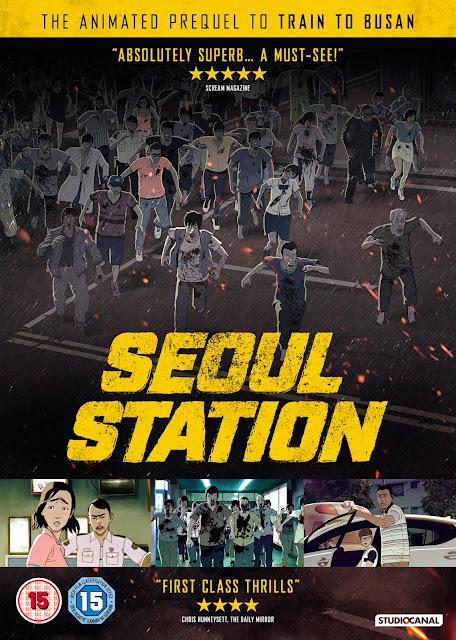 Seoul Station (original title Seoulyeok) is the animated prequel to the best zombie film of 2016; Train to Busan. I was quite excited to see this film and while I knew it wouldn't and couldn't possibly be on par with that instant classic I still looked forward to watching it. To be fair it is pretty much what I expected, though sadly aside from taking place in the same city (one day before the events of the film) there is no link tying this to that one in a narrative sense.

Seoul Station chronicles how the zombie infection started in Seoul, however we don't see the actual cause, though maybe witness patient zero in the form of an injured homeless man staggering through the streets. It isn't long before this man has turned into a flesh hungry monster, and soon his ranks swell with those of the many homeless. The film focuses on two different sets of characters. After having an argument with her vile boyfriend a teenage runaway decides to spend the night with the homeless, however she gets caught up in the outbreak and with the help of a seasoned vagrant seeks to escape the carnage. At the same time in a different part of the city the boyfriend is found by the girls father who demands he take him to his daughter and in doing so they too get caught up in the unfolding apocalypse.

The animation style for Seoul Station is kind of weird, but then I already knew it would be from the trailer I had seen many months back. Director Sang-ho Yeon also directed Train to Busan and actually came from an animation background and so was the perfect person to lead this film. Characters have a weird way of movement whereby if they move too quickly there is a blurring effect. However the unified look throughout this makes this a little bit different and actually brought to mind Dead Space: Downfall. When I say the animation is weird I don't mean it's bad, there is a lot of detail to the environments and characters display realistic emotions to them even if that equates to lots of shouting and crying.

This is very much a social commentary and I felt it was over done a bit at times. The commentary is about how the homeless and poor are treated in comparison to everyone else, you get the feeling that they are treated as almost a different species with everyone from the police down to shop keepers and even street cleaners being disgusted with them. It's no accident that when the zombies are first reported they are described as homeless people rioting rather than the monsters they are. The fact that the apparent patient zero is left alone to die stems from the fact he is a homeless man and so people don't really notice him or his wounds. This is a bleak film with a set of characters who all have large demons in their closet, people are despicable here, such as the boyfriend who wanted to set up his girlfriend as a hooker in order to pay rent, rather than him himself get a job to cover it. The police are uncaring and the soldiers who appear later on are even worse, the closest thing we get to a good character is the girl and even she is hard to root for when she is such a sheep, seemingly incapable of doing anything on her own (and leaving thousands of doors open during her many running away from zombies scenes). It is maybe too bleak at times, the girl has already been through much prior to the film that I got the impression being stuck in the middle of zombie apocalypse probably wasn't the worst thing that has ever happened to her. The characters here are all quite unlikable and also real noisy, from the start to the end characters just don't learn to speak in hushed tones, instead constantly raising their voices within close earshot of the angry cadavers.

Plot wise this is pretty much classic fast zombie business, the action doesn't let up with some cool fight scenes at times (a flying toilet cistern to the face was an early highlight) and lots and lots of chases. Scenes include being trapped in a prison cell surrounded by undead, an apartment fight, and defending a makeshift barricade, plus an ill advised trip to A&E. The zombies look fearsome with spittle coming out their mouths and lots of teeth snapping and there are a lot of them. There isn't the wave of zombie effect used in Train to Busan, nor is there as much of the dislocated look to their movements but you get scenes of huge amounts of them moving around, so this is action, action, action from the start of the horror up until near the end. They are as uncaring about the state of their bodies as ever, flinging themselves down stairwells and off of rooftops. After a shocking plot twist that genuinely surprised me the finale of Seoul Station takes place with a different type of monster that ended satisfyingly. Aside from taking place a day before the events of the live action film there was no crossover, I had almost expected either the injured girl or the terrified homeless man from Train to Busan would be here but as far as I could tell neither were. It would have also been cool to see how the outbreak actually started, such as how the apparent patient zero got attacked.

I'm glad I got to see Seoul Station and I did like watching it, though without the tie to Train to Busan I probably would have thought less of it. Immediately after seeing it I felt that I wouldn't ever want to see it again, but with a day passed since seeing it I have found myself thinking back on it more fondly than my first impressions suggested.

Posted by Daniel Simmonds at 08:15