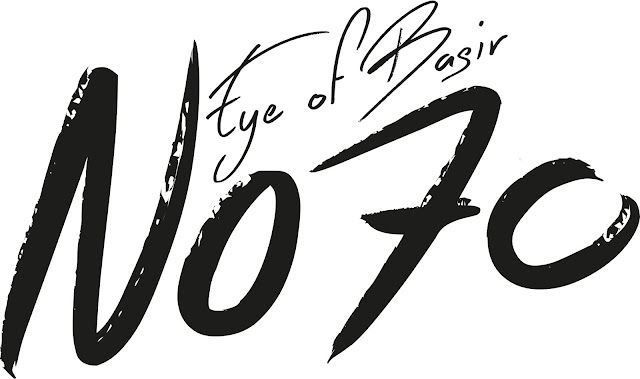 Turkish made (and set) No.70: Eye of Basir is a horror game that is set out in the 'walking simulator' style much like The Vanishing of Ethan Carter, and Everybody's Gone to the Rapture. As such this features no combat of any type, or even enemies for that matter as is the normal way with this type of game. What it does feature is lots of walking and the occasional puzzle solving over the course of the roughly two hour play through time. I played this using an X-Box 360 controller and should state that the game ran at a very low frame rate...but my PC is not designed to play video games and so that is most certainly the reason why!

I'm a bit lost as to the details of the story but basically you play as Aras whose brother Erhan has gone missing in mysterious circumstances. One day you awake to discover strange doorways in your house that never used to exist, it is while exploring these new rooms that you find a room containing the ancient device known as the Eye of Basir. Using its powers you decide to head to where you first saw it as a child; your grandmothers house at No.70. 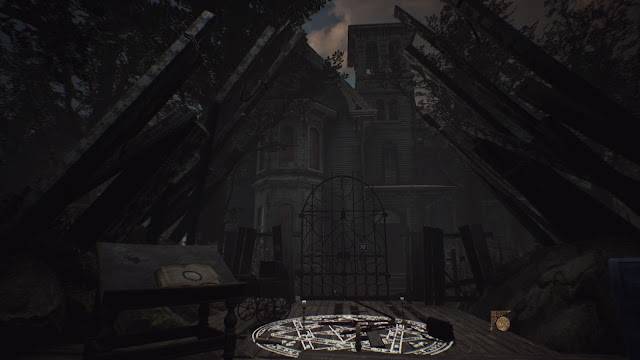 The game is split over three chapters each of which is distinct and takes place in a different location. Starting off in your house which feels the most traditional, you then go to a gorgeous looking outdoor area before the final chapter sees you at your childhood home. These all involve a lot of walking around, puzzles are pretty much restricted to finding the correct object to progress, such as using a shovel to dig up a box, or a crowbar to smash a lock. There are a couple of keypads but aside from that there are no headscratchers. While the frame rate may have been awful for me the game was still obviously attractive, the second chapter was a delight because of this taking place as it does at sunset, some of the paths lead you into the suns glare and was very attractive. A problem I had with No.70 is that you can't save the game, the only way to do so is to complete a chapter. Several times I started playing the game over the past few weeks but each time I had to quit out for whatever reason and so had to keep restarting. That is until today when I decided I would play through the game in one sitting, a manual save would have been appreciated.

This reminded me of a few different horror games I have played in recent years with it taking inspiration from a couple of classics. There are times when the world morphs and changes around you, this was my favourite mechanic the game threw out and reminded me a lot of Silent Hill and it's parallel worlds, the final chapter is pretty much nothing but this which was pretty cool. Layers of Fear was another game I was reminded of and even Resident Evil in the way that cut scenes would play out for mundane reasons, such as operating a switch. The locations while nice to look at didn't seem related to each other, I was a bit confused at times such as the end of chapter one that sees you transported into a dolls house. The horror aspect never really got to me, exploring the house in chapter one had no feeling of dread, though sure the appearance of a creepy child ghost was effective at times. Chapter two did some interesting things with the Eye of Basir (there is a button to hold it up to your face to reveal secrets) such as the appearance of body bags when using it. It was only in the last chapter that the game actually made me jump and that was due to jump scares doing their magic. 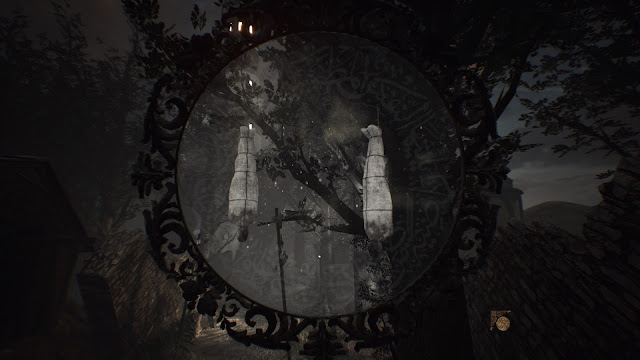 In terms of story a lot of it is told via notes you find dotted absolutely everywhere much in the style of Daylight, it turns out to be one of good vs evil and it is interesting at times but for me the enjoyment of reading these were let down by some dodgy translations. It never got so bad that they didn't make sense but they were constantly full of wrong words being used and just didn't read correctly. If I understood the ending properly then that wasn't bad even if it left things hanging somewhat. However the chapter select screen does say that free bonus content is coming in the future and so maybe the story will be added to when that comes.

I wouldn't say I loved No.70: Eye of Basir but it was inoffensive enough and I enjoyed working my way through it. With better translated story this would fare better but some may find the length a bit short, though it is a pretty game, especially outside in the open of chapter 2, and it does have some fitting music that helps build atmosphere. No.70: Eye of Basir was released on 28th June on Steam, check out the trailer below.

Posted by Daniel Simmonds at 09:19