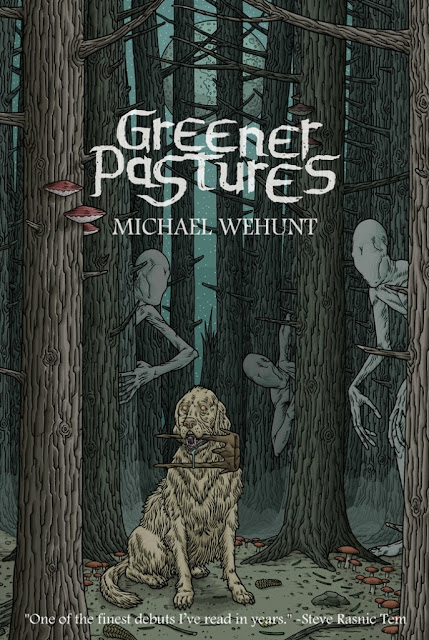 Continuing my campaign to get through eBooks faster I have recently finished reading Greener Pastures by Michael Wehunt. This is an anthology of 11 short horror tales that share a similar feeling of loss and the passing of time. Initially I worried I would not enjoy this book at all, the style of writing was a bit off putting, not in that it was badly written, more that it was a bit too well written with Wehunt content to let his words dance around the page with a lot of what he writes suggestive of events rather than simple to decipher.

So starting off we have Beside Me Singing in the Wilderness and Onanon both share a kind of vampire type vibe and so I wondered if that meant the entire book was going to be a collection of those sort of stories. Both the stories were pretty obtuse in what they describe with work needed on the readers part to work out what they are really about, I just wasn't feeling either of those ones. Next came the title story Greener Pastures which is one I got on a lot better with, it shares kind of a H.P Lovecraft style tone to it, but lighter and less foreboding. The suggestions of other worldly beings, and the setting of a remote and isolated diner gave this a good atmosphere that brought to mind The Twilight Zone. A Discreet Music follows this and was probably my least favourite, as far as I can tell a man turns into a swan for some reason? While the thought of turning into a bird is a noble passion I just couldn't really get on with it.

From here on in there isn't really any more that I didn't enjoy on some level. The Devil Under the Maison Blue is an entertaining rift on selling your soul to the devil with a good character in the form of the old jazz musician telling his tale to a troubled young girl. This is followed by the shining jewel in Greener Pastures; October Film Haunt: Under the House that sent chills down my spine just typing the title. At the end of the book Wehunt gives some background on his ideas behind his stories, for this one he said he wanted to make a found footage film but from the medium of text and boy does he succeed. It has a group of fans of a cult online found footage horror (that some believe to be real) travelling to the remote location it was filmed at only to meet with horror. This one just stayed with me, I loved how events mirror what happened in the cult film, and the whole H.P Lovecraft vibe once again going on. This reads so well that I caught myself the next day briefly thinking this had been a film I had watched rather than a story I had read!

A lot of the stories deal with loss from death, or of destroyed relationships and there is plenty of religion mixed in with this and so we get Deducted From Your Share in Paradise that sees a load of woman fall out of the sky one day and land in an isolated trailer park with the question being just were did these strange beings come from? This was an odd story but very unique and original feeling. Following this is more religion in the form of Inconsolable that seems to explore the idea of what Jesus would be like if he was a monster, at least that's what I got from it. As I said earlier I don't think I was the right demographic with this collection. Dancers is next that has a spin on demonic possession, I really liked all the contrasts between the trees in the middle aged couples garden and their deteriorating marriage due to getting old. There was some interesting lines in this, I especially liked a part that suggested something along the lines of people having children so they can take their mind off of their own inevitable ageing.

Penultimate story A Thousand Hundred Years again revisits H.P Lovecraft this time looking at the idea he put forward of a space between worlds. An illegal immigrants search for his missing daughter goes to some interesting places, chilling if you stop to think about this one. Final story Bookends is horror in terms of reality dealing with a man whose love died during childbirth, this had a good rhythmic tone of passing between the past and the present. There is a sad tone to a lot of these stories, one of the biggest fears in life is to loose the people you love to death and many characters throughout this collection have to somehow get on with their lives when they have been destroyed.

While I may not have enjoyed all of the stories here there were certainly a few that I am glad I got to read, while the topics are sometimes vastly different there is a cohesive quality in the style of Wehunt's writing that puts his own original stamp all over these. Greener Pastures has been re-released this year thanks to Apex Publications, it was originally published in 2016.

Posted by Daniel Simmonds at 12:38