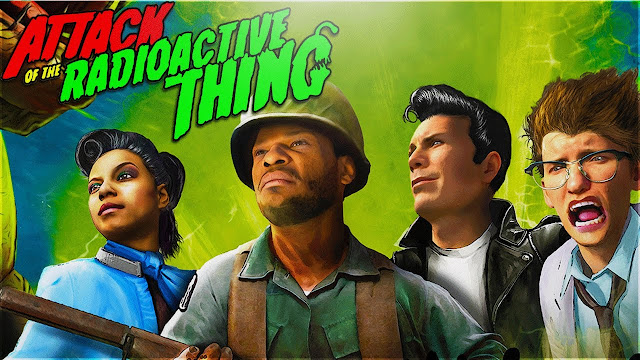 I have quite a lot of outstanding films and news I need to cover on this blog for various people so they are probably going to hate that once again I am doing one of my own blog posts. It has been a disjointed week though and so haven't had the time to be able to dedicate myself to that as much as I would have liked. Around a month ago the third DLC for Call of Duty: Infinite Warfare dropped, there were the usual four multiplayer maps that are ok, none really leapt out to me, and the usual new Zombies map as well. Each of the previous maps has been focussed on a different time period in the world of movies and this is no different with Attack of the Radioactive Thing set in the 1950's and being a send up of low budget monster movies.

The frankly always underwhelming Zombies story continues with our four hapless actors finding themselves transported to another of Willard White's movie worlds after defeating the big bad in Shaolin Shuffle. Arriving in Sonova Beach, California they soon find themselves once again under attack by the living dead, while a huge monster wades through the sea in the background and occasionally launches its children at you. As always a famous person is also trapped in the film, this time it is Elvira who requires you to get her the ingredients to make a magic potion. 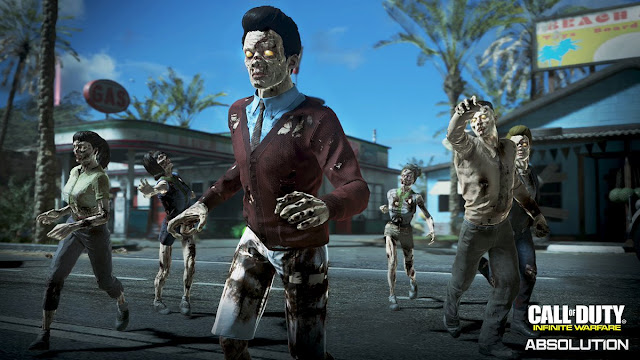 I loved the look of this level, it is set in daytime in bright sunshine and so stands out from the previous three maps that all took place at night. Much of this level takes place in the great outdoors, you have a trailer park, a beach area and a petrol station as well as a motel, a film studio, a diner and a convenience store. Dotted around the level are toxic waste barrels and strange alien eggs that cause you radiation damage. As with the other levels there is a special round every 5 or so, in this one alien creatures (crogs) get launched into the level, shots to the face are the only thing that seems to damage them and when they die they leave behind some radioactive sludge. Much tougher variations of these also appear every now and again.

I do like the Zombies mode in Infinite Warfare, it has gotten a lot of bad press and I think that is purely down to Call of Duty: Black Ops III releasing the almighty Zombie Chronicles DLC. As for this map it looks beautiful, I like the gimmick whereby the level starts in black and white, and I love how huge the level is, it is kind of like a huge circle and takes forever to do a single lap of it. Having a level set during the day time was also cool. On the music front I was disappointed as there is only a jukebox in a few locations and the music coming out of it is far too quiet, plus I haven't recognised a single track and so there has been no incentive to hover around them. The level is quite easy to survive a long time on, as is always the way I have no idea how to do any of the easter eggs, it looks like it would culminate in a huge boss battle against the giant monster out in the sea. As it is I can't even locate Elvira's spell book to start that off that particular quest chain. It was also a bit of a let down that the arcade machines in the Afterlife Arcade are all ones we have seen before rather than the usual selection of new ones. 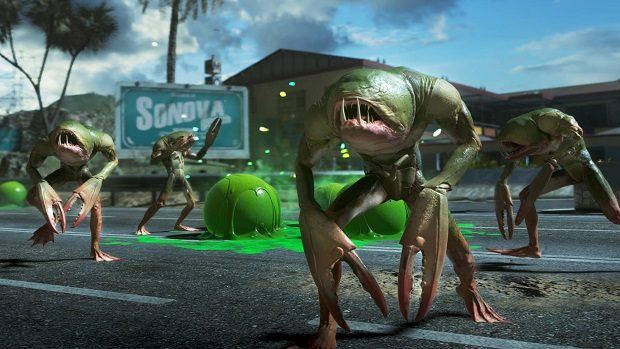 I have enjoyed playing Attack of the Radioactive Thing and am interested in seeing where the final map takes place (appears like it will be set in space) but for me yet another Call of Duty Zombies mode has stolen the thunder for Infinite Warfare. The trailer for Call of Duty: World War II - Nazi Zombies has come out and looks immense. This version of Zombies is pure horror with a dose of realism being injected. I cannot wait to play this one, you need to check out the trailer below!