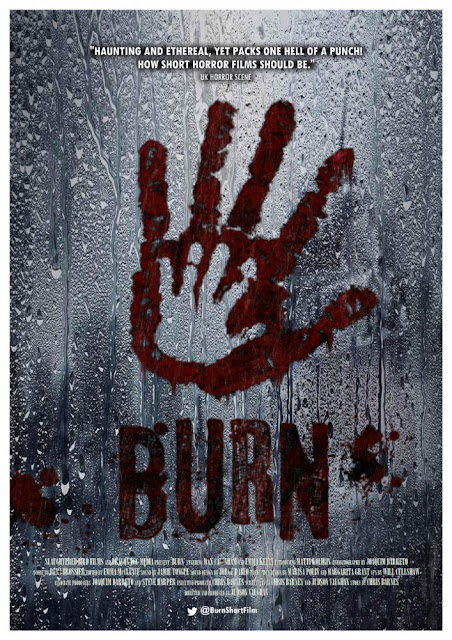 Burn is a short English horror film that is a debut collaboration between Slaughtered Bird Films and Dragon Egg Media and was directed by Judson Vaughan (Soul Breaker) and written by Chris Barnes (editor of The Slaughtered Bird). The whole film was made over just 3 days with a low budget of under £5000.

Peter (Max Cavenham) and Lou (Emma Kelly) are expecting their first child and in preparation Peter is making his unborn son a series of tapes talking about his life. There has been a series of brutal murders in the area and it is soon revealed that the perpetrator is none other than Max himself who commits suicide before being caught. Fast forward five years and Lou and her child Charlie have moved to a new area to try and carry on with their lives, yet a discovery of a hidden tape brings with it surprising revelations...

At a quarter of an hour long this doesn't have time to outstay its welcome and in fact is pretty decently paced. Initially I thought the film was leading up to the pretty obvious revelation that Peter was a killer and so was pleased to see that revealed early on. I would say Cavenham was my favourite of the actors, his camera sections had a great intensity to them. The other characters did fine enough jobs but he stood out the most. It was interesting exploring the aftermath of having found out someone you loved was not who they appeared to be, though it would have been good to see the initial aftermath rather than skip forward five years straight away. It is a lazy comparison to make but Dexter was what most come to mind watching this with a bit of Capture Kill Release mixed in too.

The horror is kept to a minimum but when it does come it has more impact and is pretty crazy in a slightly over the top way (who doesn't love a chainsaw?). It all ends on a bit of a question which is the best way to have finished this I feel. Burn is full of decent camera work and some nice cinematography, again mostly revolving around Peter. This is a psychological horror that does the job it set out to do and works mainly because of the self contained nature and natural flow that gives an entertaining insight into a troubled family. Burn is coming to film festivals in the near future so keep an eye out for it.