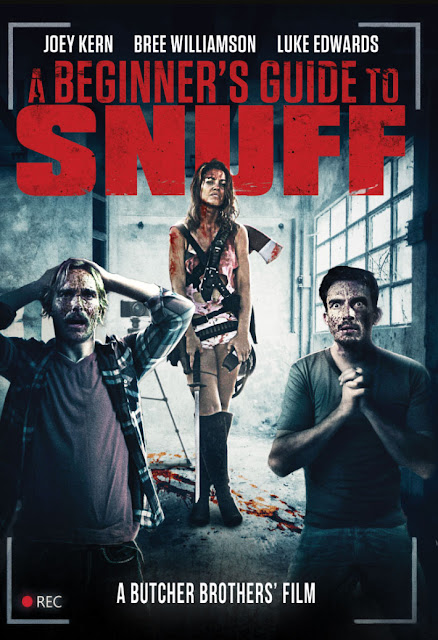 It was less than twenty minutes into A Beginners Guide to Snuff that I realised this was going to be a good movie. This is very much a black comedy, but one which mixes elements of pure horror with idiocy so well that I felt a strange mix of being both uneasy and having quite a bit of fun. This was made by the Butcher Brothers (Mitchell Altieri and Phil Flores) who also made The Hamiltons (boring fact of the day; I own The Hamiltons but have never gotten around to watching it).

Dresden (Joey Kern - Cabin Fever) and his younger brother Dominic (Luke Edwards - Jeepers Creepers 2) are two aspiring actors whose move to L.A to become big stars hasn't gone too well. Out of money and with the prospect of having to head home with their tails between their legs they decide to have one last go. Discovering a competition to make a horror film with the prize being $250,000, the brothers decide to enter, but with only one week before the closing date they are forced to act fast. They plan to make a fake snuff film but auditions for the female star don't go well. Dresden comes up with a plan to make their film look really authentic, they are going to kidnap their top choice, Jennifer (Bree Williamson) and pretend they really are going to kill her in order to get a realistic performance, later down the line they mean to let her in on the situation. However the plan starts to go wrong when Dresden begins to get a little bit too much into his role, that and the fact that they really have chosen the wrong woman to mess with. 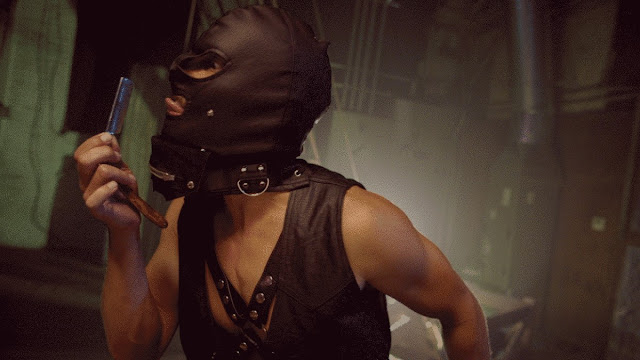 I really enjoyed A Beginners Guide to Snuff, sometimes with dark comedies there is a weirdness where scenes of straightness and comedy ricochet off each other badly with it seeming to flip between the two styles. Here though the comedy is pervasive throughout even while pure horror is unfolding on screen. Kern and Edwards make this movie, they are just so on point for the whole piece. Dresden is the domineering of the two with it shown that he has legitimate mental problems. For his role he dresses in black bondage gear and puts on a ridiculous deep voice with Batman being his inspiration. Meanwhile Dominic is the much more reasonable of the two, but he almost hero worships his brother and so is a bit of a coward when it comes to dealing with him. His get-up is a Hawaiian shirt and a latex Barack Obama mask. They work so well because of how they riff off one another, you get the feeling these two characters have known each other all their lives, it is a testament to the acting of the duo. I loved how completely oblivious they are as to the quality of the film they are making, they have both got into it so much that they don't see how utterly stupid it all is, such as when Dresden compliments Dominic on the bizarre accent he has put on for his character. Williamson by contrast isn't bad at all, she had a complicated role having to be different people as the film progressed but had much less comedy to her for a lot of the film, playing the straight (wo)man to the two bumbling idiots who have captured her.

This is clever in that it has a film within a film. At times it seems like a behind the scenes feature as the characters discuss what shots they are going to take, and planning the different stages of their film. It's interesting in how they are aping creating a horror film, yet the real film itself falls into the same beats that they are discussing. There is the set-up for the terror to come, a midpoint escape, and a thrilling finale that all mirrors the actual feature length, it almost felt fourth wall breaking at times. Impressive is how good the special effects are, without going into too much detail for fear of spoiling this there are some wince inducing moments involving various implements of torture. The film is also good at making you feel things for the characters (again much as the characters are wanting to do), initially I felt just awful for the brothers, I couldn't help but get caught up in the guilt of what they were doing. In Dresden's mind committing crime is worth it for the rewards it will bring, in this way he reminded me of Raskolnikov from Crime and Punishment. I had a contrast between liking the characters but also having a bad feeling that things would deservedly go very bad for them. Meanwhile I felt really bad up to a point for Jennifer as she seemed so scared and undeserving of her experience. 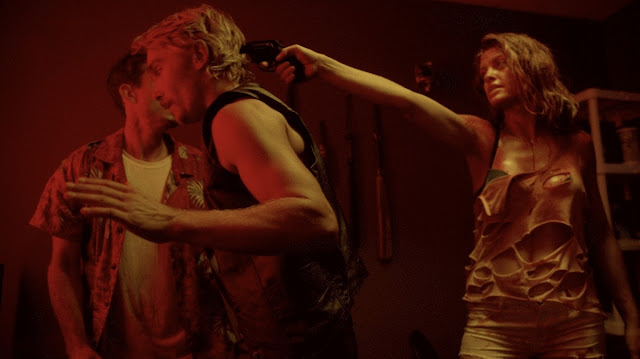 A lot of the comedy here is great, it is never so funny that I was laughing out loud, but it constantly amused. I loved how characters are constantly doing quotes from other films and getting called out on them. Everything from Reservoir Dogs to Cobra, Rambo and more are quoted, even a quote I recognised from South Park. It goes as far as to give us a comedy end credit sequence that was a nice finishing touch.  Some parts were not so strong though, especially the running gag about the brothers not realising their landlord is gay, it was milked a bit too much I felt. Later on the film gets more torture porn in style, especially one pretty exhausting scene involving a sword and a piece of anatomy, times like this the tone changed enough that it nearly lost me, but despite the move into body horror it stayed pretty consistent.

A Beginners Guide to Snuff was a pretty interesting film, and it even has time to comment on the state of parts of the horror industry, such as the usually poor portrayal of females in the genre (though I do feel that is changing more nowadays). All in all I was impressed despite occasional similarities to other films (in particular Murder Party leapt into my head). A Beginners Guide to Snuff had a theatrical release on June 23rd, while it is to be released on VOD and DVD on July 11th thanks to Indican Pictures. Check out the trailer below.